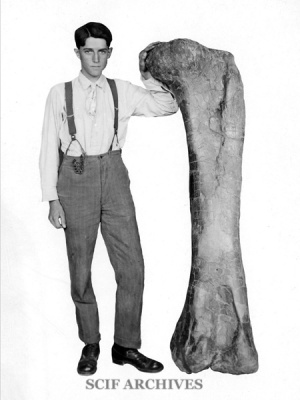 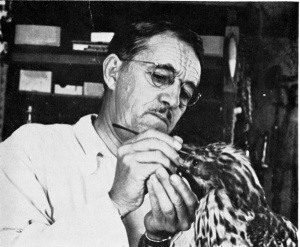 The May 1936 Leaflet reported Rett and William Hughes spent from March 17-March 27 on Santa Cruz Island “amid gales, downpours, and even hail storms” where they “sought shelter from the gale in an ancient tumble-down cabin on a high plateau in the very heart of the island.” [Buena Vista]. According to the report, “their temporary home proved a disappointment, for it consisted of large cracks, yet here, in filtered wind and stove less, the two established camp. It was not until five days had passed in utter misery, augmented by an experience with a skunk, that it was decided to beat a retreat.” “Coming in, three trips had been required; leaving, ingenuity born of misery reduced the packing to one high and precarious load.” The object of their expedition had been to collect for the museum specimens of the bird and mammal races endemic to Santa Cruz Island. In all, 67 birds and 17 mammals were collected. Their cabin was most probably the same cabin in which Ralph Hoffmann had stayed in May 1932: “About four miles west of the Main Ranch, a long slope leads to a plateau, above which rises Picacho Diablo. On the plateau is a cabin, built many years ago of poplar trees from a nearby canyon. The cabin is tenanted for most of the year only by white-footed mice ” Only scattered boards are evidence of this cabin today.

In 1945 Rett accompanied Phil Orr several times to San Nicolas Island in both spring and fall: March 7-19; March 26-April 12; and again for 9 days in September 1945. From March 15-28, 1951 Rett and Waldo Abbott did ornithological work on Santa Rosa Island “through the kindness of Mr. Ed Vail.” The museum’s annual report for the year 1963 stated: “There are no departments within the museum that have not had his gracious help and expert touch.” Rett died of a heart attack at age 66 [SS#568-42-3792].

September 20, 1929 [SBMP]: “Big sea lion is captured on Island for S. B. Museum. Egmont Rett has returned from Santa Cruz Island with the pelt of a 700-pound California sea lion which he will mount for a sea lion group in the Santa Barbara Museum of Natural History to be installed and ready for exhibition to the public during December. Mr. Rett was aided in securing the huge creature by M. E. Rodehaver and E. K. Parker, the party making the trip in the Rodehaver boat. The sea lion was one of a herd of 30 which has made a rookery at Ruby Rock and had to be handled with a block and tackle. It measures 6-1/2 feet from the tip of its nose to its tail, or whatever part of its anatomy corresponds to a tail. The taxidermy shop of Rett brothers on Rancheria Street is a busy place just now, with 45 deer heads to be mounted and others coming in. The head and sword of a broadbill swordfish which is being mounted for Buell brothers, taken off Anacapa Island, has a sword three feet long. Two fine specimens of pronghorn antelopes are in the shop mounted and ready to be placed in the antelope group in the museum, to be ready for exhibition next month. The antelopes were secured by Egmont Rett in Lassen County last year. Belmore Brown has the background for the group partly finished. South African game trophies of Charles C. Thompson which have been displayed by Buell Brothers here, have just been returned there after having been sown two weeks in the Tufts-Lyon Arms Company store at Sixth and Olive streets in Los Angeles. Mr. Thompson is building a den for them at the 7 X Rancho in the north where they will eventually be housed. Rett brothers did the mounting.”

June 12, 1930 [LAT]: “Santa Barbaran with South Sea Expedition. San Francisco, June 11.—With Philip M. Chancellor, former Chicago newspaper man, in charge, an expedition of the Field Museum of Chicago sailed today for the remote South Pacific island of Aitutaki in search of natural rarities. Norton Stuart of Santa Barbara, a naturalist, went as co-leader. Other members of the expedition are Frederick Guntrip and Egmont Rett.”