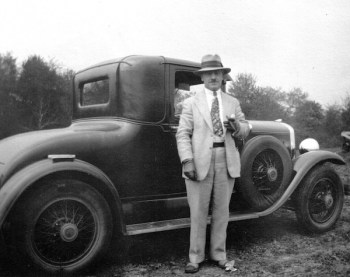 RHEAD, Frederick Hurten (1880-1942), son of the well-known English ceramicist, Frederick Alfred Rhead (1856-1933). He emigrated to the United States in 1902 and spent the next four decades in a variety of pottery positions including instructor at a tuberculosis sanitarium in California, his own pottery, the Rhead Pottery of California, and Roseville and Weller Potteries, both in Ohio. He is most well known for designing Fiesta Ware, which he conceived and designed for Homer Laughlin in 1936. Featuring 42 new shapes and designs in five bright colors, the line debuted in January of that year at the Pottery and Glass Exhibition in Pittsburgh. It was an instant success. Rhead also designed Homer Laughlin’s popular Virginia Rose and Harlequin dinnerware.

Rhead was not only a successful commercial potter, but he was also a renowned art potter as well. His last position was that of Art Director at Homer Laughlin China Company from 1927 until his death from cancer in 1942.

June 30, 1915 [SBDI]: “Landscape and marine painters are finding Santa Cruz Island a source of inspiration for their creative efforts. This week there are three artists on the island. Edgar Payne left today on the Otter for Valdez Cave, and Karl Schmidt and Frederick Rhead are already there. Mr. Payne will stay a week, resting and doing landscape work.”