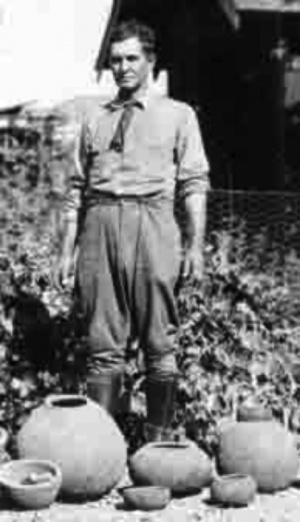 ROGERS, David Banks (1868-1954), Illinois-born archaeologist who was 11 when his family moved to Kansas. He obtained his Bachelors, Masters, and Doctor of Anthropology degrees from Kansas University. He worked for both the Smithsonian Institution and for the Heye Foundation in New York, before moving to Santa Barbara where he established the Department of Anthropology at the Santa Barbara Museum of Natural History in 1923.

Rogers made extensive explorations of the Santa Barbara Coastal region, including the Channel Islands during his 15 year association with the museum. He made his first two of many field trips to San Miguel, Santa Rosa and Santa Cruz islands in March and April 1927. An Island Fund was established at the museum to support his work. Rogers book on the Indians of the Santa Barbara region was the first major publication of the museum. Chapters detail and map sites on Santa Cruz, Santa Rosa and San Miguel islands.

May 13, 1925 [LAT]: “Santa Barbara, May 12. Only an examination of the teeth and jawbone of the petrified skeleton of a gigantic prehistoric monster found on San Miguel Island by Captain Bob Ord, will definitely determine whether it is a mastodon or a prehistoric toothed whale, according to Dr. D. B. Rogers, Smithsonian excavator, and Norton Stuart of the Santa Barbara Natural History Museum. If it is a mastodon, it will disrupt the entire sequence of geology as worked out by scientists on the Pacific Coast, according to Stuart, while if it is the toothed whale, its discovery is of vital importance, he said. Both men made a minor examination of the tusks this morning, but were uncertain as to their origin. ‘If it is a whale,’ Rogers said, ‘it died about the time the bottom of the sea rose, as it has been exposed to the air during the process of petrification and is therefore imperfect and brittle. If it had petrified beneath the water, I believe it would have been as solid and hard as other specimens we have in the museum’… Captain Ord will return to the island within a few days to secure the teeth and jawbone for examination…”

May 10, 1927 [LAT/SB]: “Remains of a prehistoric settlement of almost unbelievable extent has been found on San Miguel Island, the northernmost of the Santa Barbara Channel group, according to an announcement made by the Santa Barbara Museum of Natural History today. The village was found by David B. Rogers, archaeologist for the museum…”