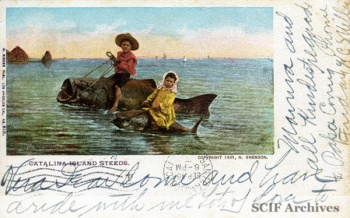 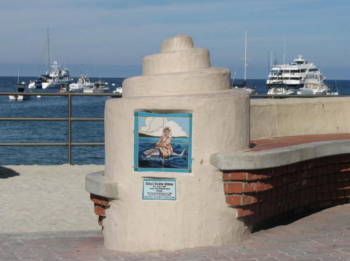 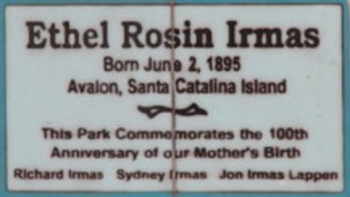 Benjamin Rosin was born in Hungary. He immigrated to the United States in 1880, and in 1886 he moved to Avalon. His wife, Sarah R. Kohn, also born in Hungary, immigrated in 1893, the same year they married. In the 1900 census, they had two children, only one of which was living.

In 1986, forty-five members of the Rosin family celebrated the centennial anniversary of Ben Rosin's arrival in Avalon.

February 23, 1895 [LAH]: “Numerous improvements are under way at Avalon. Captain McDonnell is erecting a handsome cottage on Whittley Avenue. Benjamin Rosin has completed a three story rooming house in anticipation of the madding crowds, and the Glendale is to have another annex in view of the same emergency.”

April 7, 1902 [LAH]: “The infant son of Benjamin Rosin fell from his baby buggy yesterday and broke an arm.”

August 15, 1935 [TI/Avalon]: “Catalina pioneer passes at Hollywood. A telephone conversation from Hollywood early Wednesday morning stated that Ben Rosin, of 5760 Hollywood Boulevard had passed away after an illness of several months. Mr. Rosin was 79 years of age. He is survived by his widow, a daughter Mrs. J. Irmas and three sons, Victor, Stanley and Elmer. Funeral arrangements to be announced in the Los Angeles daily newspapers. Before retiring from an active business life ten years ago, Mr. Rosin resided with his family for many years at Avalon. He was the owner of several pieces of local property and since 1919 has been the owner of the Hermosa Hotel and Bungalow Courts. The many Avalon friends of the bereaved family extend sincere sympathy for the loss of their father.”

December 15, 1938 [TI/Avalon]: “Victor Rosin was over during the weekend, looking after the improvements being made in the Hermosa Cottages on Metropole Avenue. He returned to Hollywood Sunday afternoon.”

August 19, 1949 [LAT]: “Deer Hunting at Catalina Nov. 1-Jan. 31. From Stan Rosin at Catalina comes a letter with the following interesting information to hunters: "Just read the article in our Desert Sun about the expected poor deer season in Riverside county and thought you would like to know of the recent decision of the Fish and Game division regarding the deer at Catalina. "We are to have open season on the Island by special arrangement with P. K. Wrigley from Nov. 1 to Jan. 31. This will be the first time that deer have ever been hunted on the Island and will be a bonanza season for some lucky hunters." According to Rosen there are more than 2500 deer on the island and they are so thick "they wander down into Avalon town to nibble on the lush greens of the gold course and of course, the choice blooms in our flower beds." The Rosins refer to the flower gardens of their island hotel, the Hermosa, which they operate during each summer season. He states there will be a limit to 200 hunters who wish to take advantage of this should apply for a license in Los Angeles before Sept. 10.”