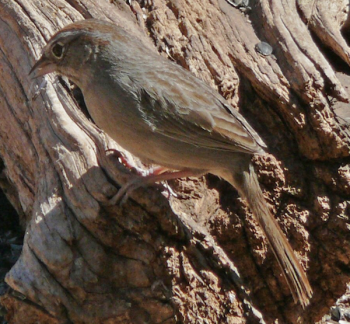 1907 Santa Cruz Island: “Aimophila ruficeps ruficeps. Rufous-crowned Sparrow. Mr. Willett and each secured a specimen in the brushy canyon near the south coast. In the early evening of December 16 I observed a flock of 40 or 50 birds feeding on a grassy hillside near Prisoners', securing two specimens.” [“At 11:30 p. m., November 19, 1907, my father (H. Linton), Mr. George Willett, and myself left San Pedro harbor in a dilapidated fishing smack and in company with a crawfisherman, one “Cold-foot” Jorgensen. We arrived off the south end of Santa Cruz Island at 10:30 the following day during a stiff norwester. For various reasons we were unable to make camp until the 22nd. It may not be amiss to state here that twice during the blow we were nearly wrecked: once while at anchor in Potatoe Harbor, a broken anchor allowing the boat to drift within the breaker line and nearly onto the rocks. In this instance the timely arrival of Willett and H. Linton in a small boat, saved the day, and incidentally the fishing smack. At another time (the engine having broken down) we were blown nearly onto the rocks of Anacapa Island; but with father at the wheel and Willett and I on the “sheet” we managed to hold her off. I mention the foregoing, and the many sleepless nights spent on the rocky shores, “running” the surf several times each day (with attendant duckings), etc., merely as a warning to those who seem inclined to believe a field naturalist’s life “strewn with roses”. (Its ’ generally strewn with cacti!)”]
Linton, C. B. Notes from Santa Cruz Island] The Condor 10(3):124-129, May 1908

Type.—Female adult; no. K 516, collection of Donald R. Dickey; Prisoner's [sic] Harbor, Santa Cruz Island, California' August 19, 1922; collected by A. J. Van Rossem; original no. 7198.
Diagnosis.—Darker and less rufescent than either Aimophila ruficeps or A. r. canescens of the neighboring mainland; central streaking of the dorsal feathers much darker and less rusty; maxillary streaks heavier; bill heavier and more swollen at base; tarsi and feet averaging slightly longer and heavier.
Range.—Common in suitable localities on Santa Cruz Island. Probably present on Santa Catalina Island.
Remarks.—Two specimens from Santa Cruz Island collected in1863 by J. G. Cooper, and are now in the Museum of Vertebrate Zoology, have the large bills and heavy feet characteristic of the birds of Santa Cruz Island. They are therefore assigned to Aimophila obscura, but only upon presumptive grounds, since they are too faded and worn to be of use for color comparison. It is deemed that the complete isolation of this insular form calls for the employment of a binomial designation, despite the comparative external agreement of Aimophila obscura with nearby races of A. ruficeps. The use of the trinomial would seem to imply a genetic relationship such as the writers are loathe to base on even close present-day resemblance.” [Dickey, D. R. and A. J. Van Rossem Additional notes from the coastal islands of Southern California in The Condor 25(4):128, July 1923 ]

1927 Santa Rosa Island: “Aimophila obscura. Santa Cruz Island Sparrow. [O. W.] Howard noted a pair of Rufous-crowned Sparrows on April 2, which may be assumed to have the same characteristics which typify the race living on Santa Cruz Island and described by Dickey and van Rossem under the above name.” [“Through the generosity of Mr. Silsby M. Spalding who placed at our disposal his splendid cruiser Padariva I the writer accompanied by H. W. Carriger, Dudley DeGroot and 0. W. Howard was enabled to spend the period from March 25 to April 5, 1927, inclusive, among the Channel Islands off the coast of southern California.”]
Pemberton, J. R. Additions to the known avifauna of the Santa Barbara Islands The Condor 30(2):144-148, March-April 1928