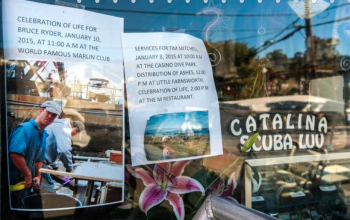 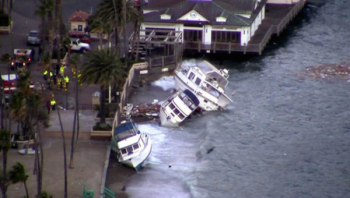 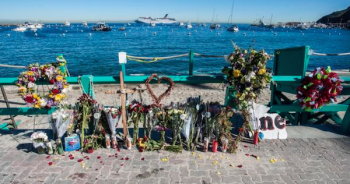 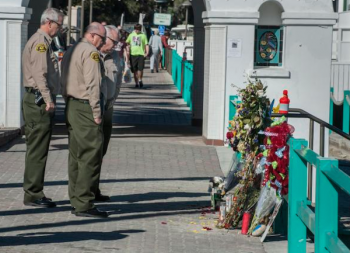 December 31, 2014 [nbclosangeles.com]: “Two men died Tuesday when fierce winds and big waves tore boats from their moorings and tossed vessels onto the rocky shore in one of the worst storms to hit Santa Catalina Island. Timothy Mitchell, 39, an Avalon Harbor Patrol officer, was crushed to death between a boat and a rock. Bruce Ryder, 53, was found floating in the water at 6:30 a.m. and died at a hospital, officials said. The Harbor Patrol officer died while trying to save a dive boat, the King Neptune, from sinking. He jumped off the boat as it came "perilously close" to striking rocks in the harbor, officials said. "The patrolman became lodged between the vessel and the rocks under the turbulent waves and could not be reached," the Los Angeles County Sheriff's Department said in a statement. At least three boats broke from moorings as wind gusts up to 40 mph lashed the island and swells up to 8 feet crashed onto the beach. Catalina is about 20 miles off the coast of Southern California. The storm snapped a section of pier on Avalon's beach. Three pleasure boats lay hard on their side on the beach, one smashed by rocks. Don MacKenzie and Lois Laughlin were not on the boat they live in when the storm hit. "We tried to get on it, but thank God we really weren't," Lois Laughlin said. The cove was vulnerable in this storm because it's not protected from waves washing in from the northeast. Residents said it was the worst storm to hit in years. Kurt Kaplan, a meteorologist from the National Weather Service, said cold, dense winds "crashed down" on the island harder and persisted longer than in recent memory. "It's rare to see one that strong," he said. Avalon's harbor patrol assigns moorings and provides security on the city's waterfront. The staff includes 11 harbor patrol officers, according to the city.”

Jan. 2, 2015 [Associated Press]: “ 2nd man killed on Catalina Island is identified. AVALON, Calif. — A second man whose body was pulled from the water after storm winds broke boats loose from moorings at Southern California's Santa Catalina Island has been identified. The Los Angeles County Sheriff's Department said Friday that the body of 53-year-old Bruce Raymond Ryder was found in Avalon Harbor Wednesday during a search for another man. Ryder's body was found about 7:30 a.m. A few hours later, the body of 39-year-old Timothy Douglas Mitchell was also found. Mitchell was a harbor patrol assistant who'd disappeared late Tuesday in Avalon Harbor when several power boats were pushed aground along the waterfront when 40 mph winds hit. The Los Angeles Times says autopsies are pending for Ryder and Mitchell.”