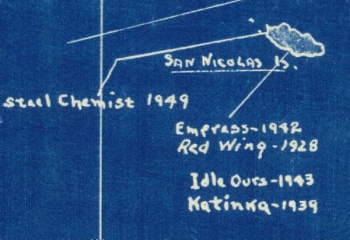 February 22, 1928 [SD Evening Tribune]: “Rescue nine as schooner sinks. Captain Antonio Zinkich and a crew of eight men were rescued at sea early Sunday, when their schooner sank near San Nicolas Island, 140 miles off San Diego, according to word brought here by fishermen. The schooner was being loaded with sardines at the time it sank. It was valued at $10,000 and had hundreds of dollars; worth of sardines aboard, the reports state. Capt. Zinkich and the crew were taken to San Pedro.”