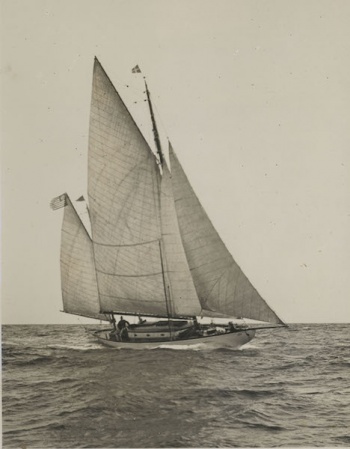 Royal (#) (+1916-1919), flagship of the Santa Barbara Yacht Club, was purchased by a consortium of yachtsmen from a club in San Pedro in September 1916. Dr. Wells, SBYC commodore in 1918, was one of the owners, although he is not known to have had any boating experience. Capt. George Gourley was in charge of Royal.

The vessel suffered multiple mishaps before her final fatal grounding on May 29, 1919 west of Stearn's Wharf.

September 27, 1916 [SBMP]: “Local syndicate buys yacht Royal. Cruising vessel will be brought to these waters next May. If the plans of a little coterie of enthusiastic local yachtsmen are carried out as it is thought they will be, there is a pleasing prospect of a return of the yachting game to Santa Barbara—as plenteously supplied with favorable yachting conditions, by the way, as any locality on the Pacific coast. A "syndicate" composed of E. J. Gourley, Arthur C. Greenwell, Ludwig Hoefling, Howard Truslow, Clio L. Lloyd, Emanuel Rowe and Dr. C. L. Sutton has purchased from ex-Commodore D. H. Laubersheimer, of the South Coast Yacht Club of Los Angeles, his yawl yacht Royal, now at San Pedro harbor, and she will be delivered here next May, the buyers, referring that their craft should remain in the security of the southern harbor until storms of winter shall have passed. The Royal measures 36 feet overall. She has 10 feet, 8 inches beam, with a draft of 7 feet. The yacht is fitted with a fine cabin and galley, and has sleeping accommodations for eight, with seating room at table for twelve people. She is supplied with a six-horse-power auxiliary engine—"just enough to kirk her home when the wind dies down," as Ed Gourley puts it. The Royal is a cruising yacht, and not at all intended for racing. She is a very comfortable craft, and her owners anticipate great sport next spring and summer in trips up and down the coast in their new boat, and they hope the Royal will prove to be the nucleus Santa Barbara channel for a good-sized fleet of pleasure boats for the Santa Barbara Channel—which, they opine, should be a natural center for yachting sport on the California coast.”

July 24, 1917 [SBMP]: “S.B. Yacht Club will meet tonight to elect officers. The Santa Barbara Yacht Club will meet tonight at 8 o'clock in the office of their commodore, Dr. George S. Wells, San Marcos building, when they will have election of officers for the coming year. After that the matter of repairing the club's yacht, Royal, will be taken up. Last week a boatman was sent for to look over the yacht, which drifted ashore in a disabled condition early last September, and he pronounced it feasible to make the repairs here in Santa Barbara.”

May 19, 1919 [SBMP]: “Flagship Royal is wrecked on beach. Cable parts as yacht is launched and boat is piled up on sandy shore. The yacht Royal, flagship of the Santa Barbara Yacht Club, today lies totally wrecked on the beach near the Manhattan club house. Throughout last night a force of men worked like Trojans in an effort to pull the disabled craft high and dry on the sand in order that a survey might be made to determine the damage sustained. Whether the Royal will ever be made seaworthy agains depends largely upon the condition of the hull after a minute examination has been made. According to those who viewed the wreck last night, very little hope is held out that the Royalwill ever be able to ride the waves of the harbor again with the ease and grace that have added to her many laurels during regattas in Pacific waters.Ill-fated launching. It appears that an effort was made to launch the Royal at low tide about 4:30 o'clock yesterday afternoon. Workmen a few days ago completed the job of installing a new marine engine in the boat and prior to this addition carpenters and painters had been busily engaged retinting and relining the interior of the craft. Last September the Royal was rudely bumped about the beach when she dragged her anchors. It was found necessary at the time to completely overhaul the boat, and her seams had opened, admitting much refuse and an excess cargo of sand. No ceremony was decided necessary yesterday by the Santa Barbara Yacht Club, the yachtsmen being desirous of getting the Royal safely in the water, following which the feat could be commemorated accordingly. Cable parts in middle. As the Royal, attached to a cable, slid into the sea, everything apparently was working well. However, something went wrong and, when the cable parted in the middle, the Royal unencumbered and foot loose and free, wallowed for a moment in the trough of the sea, when a stiff comber crashed into her amidships, throwing her over on her port side. Before lines could be attached the yacht was shoved slowly shoreward by the terrific impact of the heavy sea. Jumping into the surf, the yachtsmen and others made valiant efforts to succor the boat before she was pounded to pieces. Filled with water and sand, and with many leaks in the hull, the Royal immediately became water-logged, and this added to the discomfort of the workers and only made the dead weight to be pulled ashore much greater. Members of the Manhattan club came to the rescue in more ways than one. They threw open the cozy quarters at the foot of State, started a roaring fire in the grate, arranged the baths for the tired workers and even provided lunch, all of which was undoubtedly appreciated. The Royal was valued at approximately $6000. Plans had been perfected for many delightful cruises in southern waters this summer. One of the sad features of the wreck is the fact that the Royal was destined to take an active part in several interesting races next month, staged under the auspices of the South Coast yacht Club at San Pedro. Catalina Island was to have been the romping ground for the local boat the last of June. However, it may be that the Royal will again resurrect the glory of the Santa Barbara Yacht club and fly the time-honored pennant which is famous on the register of every yacht club in the United States.”