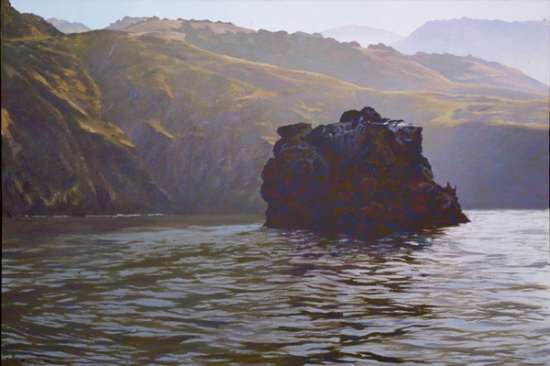 Ruby Rock, Santa Cruz Island is a small named off-shore rock located to the east of Painted Cave and Punta Gorda on the island’s north coast. In 1929, Mr. Rett of the Santa Barbara Museum of Natural History, collected a big bull sea lion from Ruby Rock for mounting and display at the museum.

“Ira Eaton told me to go up to Fry's and he also told me to go to Ruby Rock, by the Painted Cave and you could anchor there... Quite a place. You could go in there right by this rock, west of Valdez 2-3 miles. When you get in there, you go right up to the cliffs, 100 feet or less, in the kelp bed. Shake her up and drop the main, and your jib, and drop your hook, and put out your stern line fast. So, meantime, the seas go by a hundred yards offshore, great big black cats, but in there it is very pleasant. So we spent a night there, and the next day went up to the Painted Cave, in the dory, where Smith and I found some petrels nesting in a cave there which no one knew about. So we got some eggs and we got some birds. These were rare petrels, not the black ones, but Least Petrels...” [History of Siwash as Recalled by Howard Walter Wright, Sr., n.d., unpub.ms., SCIF Archives]