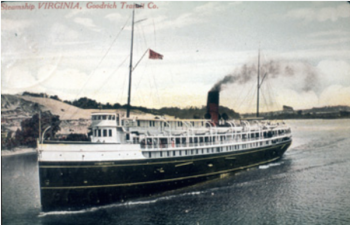 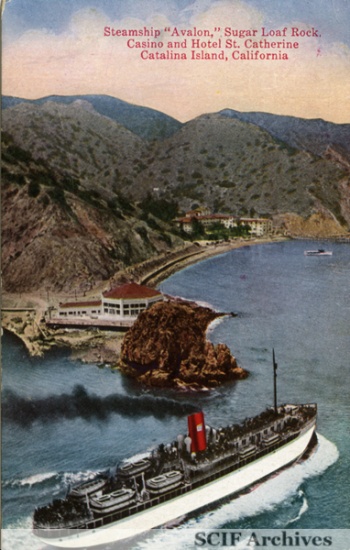 S.S. Avalon (#161654) (1891-1960), 269-foot steel-hulled passenger steamship built by Globe Iron Works of Cleveland, Ohio in May 1891. Launched as the S.S. Virginia, she carried passengers between Chicago and Milwaukee on the Great Lakes. In 1918, she was requisition by the Navy for use in the World War I and renamed the U.S.S. Blueridge. However, to get her through the St. Lawrence River locks, her bow and 6 feet of her stern had to be cut off and later reassembled. While waiting for orders in Boston harbor, the Navy finally decided she was no longer needed, and she was sold as surplus to William Wrigley, owner of Santa Catalina Island.

The ship was renamed Avalon and was sent from New York via the Panama Canal, arriving April 5, 1920 and moored at the Catalina Terminal. Her debut would not take place until the arrival of William Wrigley Jr. On April 15, 1920, the Avalon left on her first trip to Catalina with Captain Alexander Smith in command, taking her full capacity of 3,000 people. A big fanfare was planned for the new "Queen of the Channel," including a 32 piece orchestra. The Avalon was dressed up with silk flags and 150 guests were invited for the trip, including members of the Banning family, Santa Catalina Island Company and newspaper reporters. The million-dollar ship featured staterooms, four cabins with private baths, two mahogany and mirror trimmed ballrooms, electric ventilation. Powered by two triple expansion steam engines, each producing 1500 power, the ship could cruise at 16 knots.

The Avalon tied up to the Catalina terminal, at the foot of a Canal street that ran through Los Angeles. At some point in time around 1921, the ship's name was bestowed upon Canal Street and changed to Avalon Blvd. When World War II broke out, the Avalon was again requisitioned by the government and ultimately returned to her owners after the war. She was retired from service to the island in February, 1951. After nine long years laid up at Wilmington, she was sold on January 22, 1960 to Everett Stotts for scrap, and her machinery and most of her superstructure was removed. She was again sold to Norman Ream in June and on July 18, a fire gutted what remained of the ship. Both the Coast Guard and Long Beach fire boats poured in tons of water into the smoldering hulk, causing it to take on a list. In September, Alvin Kidman, James and Jerry Kryda and James Adams purchased the hull. The hulk was left moored in the harbor and was condemned as a hazard to navigation and moved to Redondo Beach. By then, it had been cut down near the water line and a large crane was mounted on its stern. During a storm on September 16, 1964, her anchor chain broke and she foundered and sank off Point Vincente, coming to rest in 70 feet of water. Today divers explore her remains.

The Wreck of the S.S. Avalon

November 4, 1919 [SBDNI]: “New York. The former Great Lakes steamship Avalon has been purchased from the United States government by a syndicate for passenger service between Los Angeles and the island of Santa Catalina. When the armistice was signed the Avalon was being fitted up in a Brooklyn dry dock as a transport. She will be remodeled.”

February 18, 1925 [TI/Avalon]: “Repainted and redecorated, the steel steamship Avalon, Captain Lee Mussetter, is now on the daily run between Catalina Island and Wilmington.”

February 5, 1931 [LAT/SCat]: “Avalon. In ‘recognition of the saving of life on the high seas,’ the Mrs. William Wrigley, Jr. awards of a handsome gold watch to each were presented to Captain William Cummings, First Officer Frank Penoyer and Second Officer Gustav Metji of the S.S. Avalon and to Harry Boosinger of the glass-bottom boat Emperor… Harry Boosinger, the fourth man to receive recognition for valor from Mrs. Wrigley, was cited for his courage in leaping overboard into a seething sea during a storm when a companion was swept overboard from the glass-bottom boat Emperor.”

January 9, 1936 [TI/Avalon]: “Captain Lee Mussetter of the S.S. Avalon, during his four-hour stay, does not like to play golf, but would rather fool the fish with a piece of stale bread.”

March 7, 1946 [TI/Avalon]: “This week saw the joyous sight of the S.S. Avalon, glistening white in her new coat of paint, the war-time gray of her hull erased like the memory of a bad dream, dock at the steamer pier and disembark its first pleasure passengers since December 23, 1942. Everyone was on hand to welcome back Santa Catalina’s happy days — sirens screamed, whistles tooted — the traditional reception line was at the pier entrance. Avalonites rubbed their eyes in unbelief. Here and there glistened a joyous tear. Yes it was true — the boat was on again…”