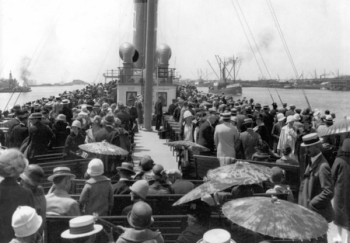 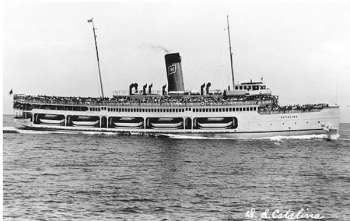 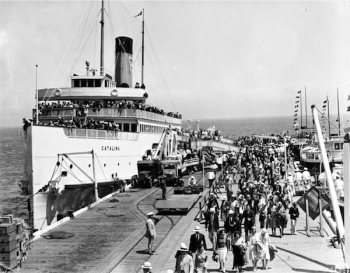 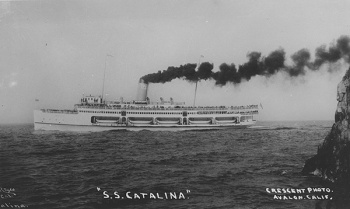 S. S. Catalina (#223907) (1924-1976), 285-foot steel-hulled ship built in San Pedro for Santa Catalina Island excursion service, the last and largest of the excursion ships built to serve the island. William Wrigley, Jr. commissioned her to be built at the Los Angeles Shipbuilding and Drydock Company at a cost of $1,000,000. Her original capacity was was 1,963 passengers, which was later increased to 2,197. All her lifeboats were housed on the lower deck, leaving more room for passengers on the top promenade deck. Known as the ‘Great White Steamer,’ the S.S. Catalina is said the have carried more people than any other ship in the history of her time. She made more than 9000 trips to the island, and carried more than 20 million passengers. She also transported over 800,000 troops in San Francisco during World War II. Both United States presidents Coolidge and Hoover are counted among her guests.

Captain Arthur A. Morris served as the first captain of the S.S. Catalina. Captains Hans Christensen and Lee Mussetter followed. Captain Lloyd Fredgren was the ship's last master, and he remained with the S.S. Catalina for the rest of her active career.

S.S. Catalina was retired from Island service in 1976. The following year she was placed on the National Register of Historic Places and registered as California State Landmark No. 894, and City of Los Angeles Historical Cultural Monument No. 213. She was put up for auction in 1977, and purchased by Hymie Singer, a real estate agent who bought the ship for $70,000 as a Valentine’s Day present for his wife. The ship languished in Santa Monica and Long Beach, frequently breaking loose from her mooring. She was eventually taken to Ensenada, Mexico where she remained a foundered eyesore in the Ensenada Harbor.

February 18, 1925 [TI/Avalon]: “Repainted and redecorated, the steel steamship Avalon, Captain Lee Mussetter, is now on the daily run between Catalina Island and Wilmington.”

September 1, 1955 [TI/Avalon]: “Captain Lee Mussetter bowed out to the fanfare of shrill whistles, fog horns harbormaster cannon, and assorted harbor noises yesterday at 4:30 when he headed the big white steamer Catalina to the mainland for his last trip aboard as captain. He begins a well deserved retirement today. The captain received a going away present from 50 Avalon businessmen in the form of a draft for $234.00 which was contributed by them as a token of appreciation and good wishes. There was a short ceremony on the boat just before the trip, including an interview over KBIG. The bay was crowded with boats full of well-wishers and old timers said it was one of the biggest sendoffs ever accorded anyone here. The Flying Fish boats were decorated, and the shoreboats, cruisers, speedboats and autoboats all converged near the steamer pier as the Catalina sailed for the mainland.”

October 20, 1955 [TI/Avalon]: “A 65-year-old lady from Long Beach, Mrs. Katheryn Sells, leaped to her death in an apparent suicide from the steamer Catalina on its run to Avalon last Friday. She umped from the stern end of the top deck, taking advantage of the fact that there were not many passengers on board who might have stopped the attempt. Almost immediately after the jump it was reported and the steamer stopped, and then made a 360 degree turn, returning to the area. Fortunately, she did not sink due to her billowing clothes and was spotted face down near the spot she jumped. The work boat was put over the side and she was picked up, still alive. She did not drowned as there was no water in her lungs, although she passed away before the steamer reached Avalon apparently from the effects of the jump and shock. Mrs. Sells had purchased only a one way ticket, indicating she planned the jump as a suicide. No motive has been ascertained for her action.”

November 4, 1974 [Long Beach Independent]: “Avalon City Arry. Chalmers Lones this week is to seek resumption of state Public Utilities Commission (PUC) hearings into the quality of boat service provided out of San Pedro to Catalina. City Manager Jack Osteen said the City Council directed Lones to make the request at its Tuesday meeting since the PUC has never provided Avalon with the results of hearings held last spring to determine the 'service or lack of service' provided by Catalina Motor Cruises. He said the request for new hearings was made because of the absence of findings by the PUC, combined with 'Avalon not seeing promises made (by Catalina Motor Cruises) in the hearings carried out.' Osteen said the Avalon City Council hoped continuation of the hearings would result in a complete evaluation of boat transportation to Avalon. 'Our highway is the ocean,' Osteen said. 'We can't build a bridge over it.' He said the Avalon City Council was satisfied with service provided by the three boats operated out of Long Beach by Long Beach Catalina Cruises. 'The Long Beach boats have done a tremendous job,' he said. 'They stuck to their schedules as promised and cooperated in all ways. They've built good will and reliance and brought in as many people as the San Pedro boats.' Osteen said Catalina Motor Cruises operates the Betty Lou daily from the San Pedro Terminal to Avalon when the Great White Steamship SS Catalina is not in service. The steamship and the Carib Star are operated by the MGRS Co. Osteen said MGRS and Catalina Motor Cruises were 'in the same corporate structure and interlocked with some other boat operators.', but he said he didn't know the nature of this relationship. He said one of the problems the city has encountered with Catalina Motor Cruises is attempting to find out whether the organization owns or rents the Betty Lou. Osteen said the City Council felt this knowledge was important because it tied in with all aspects of the San Pedro boat service. Osteen said the city wants hearings into Catalina Motor Cruises' operation because of what he said was 'a great deal of difficulty' the city had with the organization last winter.”

October 1319, 2019 [The Log]: “All aboard the SS Catalina. Also known as the Great White Steamer, SS Catalina was a steamship built in 1924 by William Wrigley to serve Catalina Island as a passenger ferry. According to Catalina Island Museum, the ferry carried more than 22 million passengers on the 26-mile passage across the San Pedro Channel to Catalina Island for 50 years, including these passengers in this 1920s photograph. During World War II, she was requisitioned for use as a troop carrier, but resumed her voyages to Avalon in 1946. Catalina made her final voyage in 1975, retiring after several years of labor disputes and financial difficulties, according Catalina Island Museum. California Historical Landmarks reported that in 1997 she ran aground in Ensenada, Mexico, where she remained until she was scrapped in 2009.”