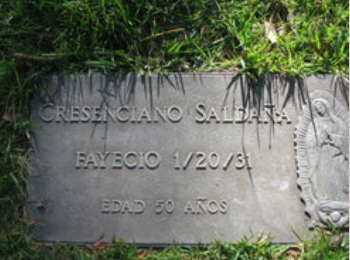 January 21, 1931 [The Catalina Islander]: “Jose Soldonia, aged 56, fell down a cliff near Avalon while out walking early Tuesday morning and injured his head. Fire Chief Sullivan immediately brought the injured man to the Catalina Hospital. Soldonia has two sons working in Avalon, who were notified of the accident as soon as the injured man had been identified.”

January 28, 1931 [The Catalina Islander]: “Jon Saldonia [sic], the Mexican resident whose injury was reported in out last issue, died from his injuries, and was buried last week. The interment was in charge of Mr. Ivy Overholtzer of Los Angeles.”