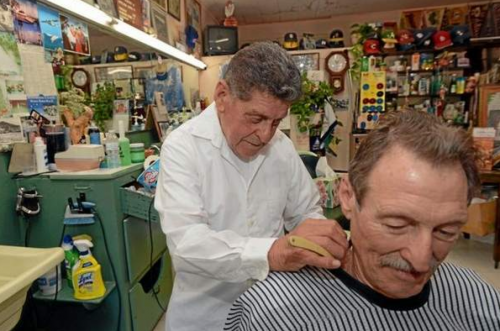 Barber, Lolo Sandana in his shop at
Santa Catalina Island, 2015

LOLO AND THE BARBERSHOP documentary

August 14, 1915 [Long Beach Press Telegram]: “Lolo, the barber of Avalon, betting on the Chicago Cubs: Everyone on Catalina Island knows Lolo Saldana, the loquacious Barber of Avalon who has been cutting hair there for 60 years. Born and raised in Avalon, Saldana, who celebrated his 86th birthday July 3, is an island treasure. Anyone who is anyone visiting Avalon sooner or later will stop in at Lolo’s Plaza Barber Shop for either a trim and/or a stimulating conversation. He will regale you with stories about Tarzan movie star Johnny Weissmuller scaring island peacocks with his famous yell, golfer Ken Venturi, a young Tiger Woods and dozens of other celebrities. But, to me, Saldana’s main claim to fame is that he is a diehard Chicago Cubs fan, just like me. That makes him a man of great patience, considering that the Cubs have not won a World Series since 1908. In fact, the Cubs haven’t even been in a World Series since 1945. Despite this horrendous losing streak, Saldana has not lost faith in the Cubs and, in fact, has just laid down a bet that may make him the most optimistic man in the nation. Saldana has bet $50 in Las Vegas that the Cubs will be in this year’s World Series and another $100 that they will win it! Where does Saldana get this optimism from? It was a tip he got from none other than Mr. Cub himself, Ernie Banks, the Hall of Fame shortstop who died earlier this year. “Ernie stopped in for a trim on his 80th birthday,” Saldana said. “We were shooting the breeze and he told me, ‘Lolo, the Cubs are going to be really good in four-to-five years. So I bet on them this year. I wish Ernie was here to see how good they’re doing.” At the moment, the Cubs are playing very competitive baseball. If the season ended today, they would be in the playoffs. Saldana’s love for the Cubs goes back to his boyhood days when he watched the team during spring training on the island in the 1930s. Chewing gum magnate William Wrigley, who owned the Cubs and a controlling interest in the island, thought it would be a good idea to watch his beloved team play on his island before the season started. Except for the war years of 1942 through 1945, the Cubs went to spring training on Catalina from 1921 to 1951. Saldana and his pals loved to watch the Cubs, grab foul balls and wear old uniforms and gloves that players gave them. “I had an old uniform worn by Hack Wilson,” Saldana remembers. “I wish I still had it.” Wilson is in the Hall of Fame and still holds the major league record of 191 runs batted in in a season. Saldana even had a mini-tryout with famed Cubs coach Charlie Grimm. “But I let too many ground balls go under my glove. Besides, my first love was golf,” he said. Saldana was a star golfer at Long Beach City College and Cal Poly San Luis Obispo. Calling himself “a daydreamer,” Saldana quit school to join the PGA tour, but he needed money for that. So he learned how to cut hair at a barber school in Long Beach and went to Catalina for what he thought would be a temporary hair-cutting job. But he met and married Lidia, the love of his life, and they decided to stay on Catalina and raise a family. One of their sons, Gilbert, was mayor of Catalina when he was 22. Lidia died in 2008. The walls in Saldana’s barber shop are plastered with sports memorabilia, including photos, newspaper clippings, pennants, hats and helmets. Saldana is hoping he soon will be able to put a front page on his walls with the headline: “Cubs Win! Cubs Win World Series! Holy Cow!””

June 21, 1919 [Ti/Avalon]: “Lolo the barber will soon be ‘Lolo’ the film star. He’s not Jack Black, but every bit as funny. He’s not James Bond, but every bit as debonair. The truth is he’s Lolo Saldana, and it’s a safe bet there is no one in the world quite like him. And wouldn’t you know it, Lolo is about to himself become a movie star, as the film “Lolo and the Barbershop,” produced by Story Bank and directed Jack Piatt will hold its premiere July 3 at the Catalina Island Museum. Actually, his real name is Eliodoro, but says “I changed it all just to Lolo; a little more simple.” Lolo’s Barber Shop is much more than a barber shop. In many ways, the tiny photos pasted and taped to the walls create a living history of his many years on the island and half a century in the barbershop. “I was born and raised on this island,” says Lolo, “it’s a beautiful little town, still has quaintness.” Actually, Lolo turns 90-years-old on July 3, the day of the film’s premiere. “Am I in love with the barber shop,” asks the interviewer, “you might say I am,” says Lolo. “It’s been my life.” Once and still very much respected as a golfer, Lolo has pictures in his barbershop of Tiger Woods playing golf at 5-years-old. In fact, there are so many celebrities on the walls that have visited Lolo and the barber shop that it would be unfair just to mention a few. For sure, Lolo has built his own legend on Catalina Island. Not only does Lolo love Catalina, but he loves this country so much that he literally breaks down in tears trying to express it. “I love this country,” he says unapologetically. In the film, he also speaks glowingly about his parents, who raised 11 children on Catalina. “We took up two places,” he says, “had a little farm area, grew vegetables and fattened up the wild boars.” His dad came to Catalina in 1919, the year William Wrigley, Jr. purchased the island. Although Lolo personally remembers the Wrigley owners who came later, he claims they had genuine respect for the men and women working as laborers on the island. “They would stop and talk to you, just to see how you were doing,” he said in a 2018 interview. The Catalina Island museum has issued an invitation for the community to join Lolo at the premiere screening of “Lolo and the Barbershop.” “Join us for an evening with Lolo and his family, the screening of the film in our outdoor amphitheater and appetizers by The Lobster Trap,” according to a museum posting. For Saldana, Catalina Island represents a “paradise; how can you not love it” and for as much as the island has given him, he believes in giving back. “You can’t just take from Catalina, you have to give something back,” says Lolo. On that score, his role as a leading man is very well deserved indeed. He has indeed earned his role as a leading man on Catalina Island.”