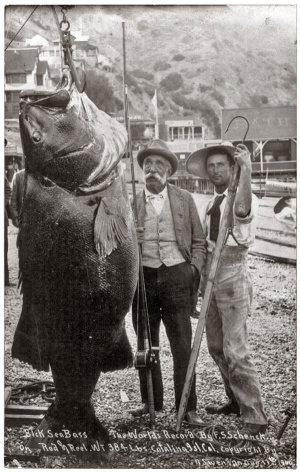 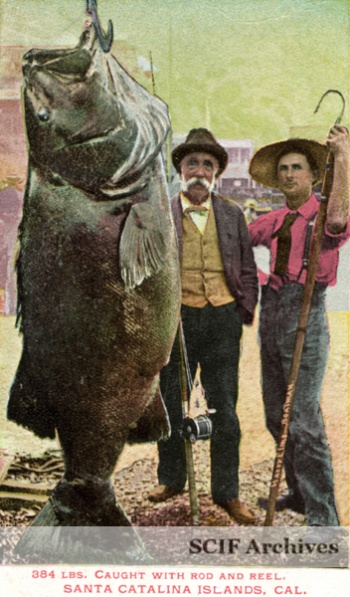 Franklin Schenck died in January 1902. He is buried in Green-Wood Cemetery, Brooklyn, N.Y.

July 15, 1898 [LAT]: “Avalon (Catalina Island) July 12.—Today was a red-letter day for the aspirants to membership in the Tuna Club. Frank Schenck of New York was out with Mexican Joe, and Nat Wilshire of Los Angeles went out at 3 o'clock, and both gentlemen in different boats had many strikes and each took a fish...Mr. Schenck's weighed eighty-four pounds...”

July 5, 1899 [LAT]: “A new tuna record. Moorhouse's fish weighed 250 pounds. Avalon, July 4 — the world's tuna record was broken last evening by Colonel C. P. Moorhouse of Pasadena, who landed a 251 pound tuna with rod and reel after a battle which lasted three hours and twenty minutes. The tuna was hooked off White Rock about sundown and the greater part of the battle was fought in total darkness. The movements of the tuna were exceedingly hard to follow and great care had to be exercised to keep the line from parting. [James Gardner was boat captain.] Frank V. Rider captured a 175-pound tuna this morning off Long Point, after two hours and thirty-one minutes of rare sport. Schenck landed a 150-pound tuna in two hours this morning. This is Mr. Schenck's first tuna and he is now a member of the famous Tuna Club.”

June 18, 1900 [LAT]: “Tuna fishing in now par excellence. Great schools of the leaping monsters are seen daily and seldom is the anxious angler compelled to come in without a strike, although he may not land his fish when hooked. Friday morning and afternoon schools of tuna played back and forth across the bay not over a hundred yards from shore, pursuing a school of mackerel which had run in. Every day from three to ten of the huge fish are brought to gaff, and the smaller ones have almost 'ceased to count.' Friday three were landed, two of which weighed 108 pounds and the other 120. The largest was caught by Franklin C. Schenck of New York, an enthusiastic fisherman, who has landed eight tuna since his arrival several weeks ago.”

June 28, 1900 [LAH]: “Two of the most prominent members of the Tuna Club, Prof. C. F. Holder and Franklin V. Schenck, returned yesterday after a short absence from the island, to once more try conclusions with the big fish.”

August 27, 1900 [NYT]: “Catalina Island, Aug. 18 — The world's record for the heaviest fish landed with rod and reel was broken yesterday afternoon by F. S. Schenck of New York, who brought in a jewfish, or black sea bass, weighing 384 pounds, which was captured on a twenty-one-thread Cuttyhunk line after a twenty-minute fight. The record has previously been held by T. S. Manning, who, on Sept. 16 last year, took a 370-pounder after a two hours' contest.”

[1901]: “...Mr. Schenck is a veteran at tuna fishing. He comes out to Santa Catalina every summer, religiously, from his home in New York, to engage in what he asserts is the greatest sport on earth. Last summer he inveigle nineteen of these masterful fish into trouble, but how many got away with his is another story. He entered the ring this time with the utmost confidence in his ability to do things to his fish, and for encouragement recounted the notches on the end of his rod. It was an intensely interesting interview he had. The big fish, after the manner of the mackerel, made a rush. It seemed as though it never would stop. The brake was part on to the last ounce the little thread would stand, and then the fish was towing the boat and taking line at an alarming rate. It must be checked soon or the 900 feet of line would be all gone. The launch was hastily backed toward the fish until it fortunately changed its course, and then the angler had an inning and recovered enough line to place him beyond immediate danger. Another fierce rush was made, and then another and another. The angler was put on his mettle and all his skill brought into requisition to parry the rushes, and the fish was fighting as though possessed of seven devils. It played all the tricks its mother had taught it, which were not a few, and at the end of an hour whatever advantage had been gained seemed to be with the fish. The angler would gain a few turns on the reel and the tuna would force it out again, and all his efforts to tire the fish were vain. Two hours passed and still the battle raged. Mr. Schenck, anxious to end the struggle, as his strength was failing, was fighting desperately. Harry Elms, his boatman, who is also a veteran angler, was coaching: 'Now give it to him!' 'Don't let him run!' 'Check him!' 'Check him!' 'Now pump him!' 'Lift him!' 'There; three or four turns.' Perspiration was pouring off the old gentleman in rivulets. His hands, cut and bruised in a dozen places, were bloody as a butchers, and he was fast losing strength. Two hours and a half passed and Mr. Schenck was about done out. The fish was still fighting furiously, although a lot of line had been gained on it. Harry was still coaching, and would have been glad to give the angler a minute's rest by taking the rod, but under the rules of the Tuna Club no one is allowed to so much as even touch the rod, reel or line of the angler while fighting a fish, or his catch will not be registered or recognized by the club. The Tuna Club holds a fishing tournament every summer covering three or four months in which substantial prizes are given for the first tuna of the season and for the largest fish in all the classes of fish taken in these waters, the presidency of the club going to the member who succeeds in taking the largest tuna. Mr. Schenck's fish being apparently the first tuna of the season and two fine pries being hung up — one to the angler and one to the boatman — besides the honor of having taken the first fish, which is not lightly esteemed, there was much involved in this fight. 'Keep a stiff upper lip, you'll soon have him cursing,' said Harry. 'Now pump him! Lift him again!' 'The Lord knows I'm doing the best I can, Harry!' I can't lift a pound any more; I'm played out!' was Mr. Schenck's reply, and after another final effort he most hesitantly handed the rod over to Harry. Harry took the rod and there was something doing about there for the space of the next fifteen minutes when the hourly fighter was safely landed. It weighed 138 pounds. The credit of the first tuna of the season fell to Co. R. A. Eddy, of San Francisco, who went out with the same boat and boatman employed by Mr. Schenck, and in one hour's time reported back with a 124-pound tuna.” [American Rifleman 30:326 (1901)]

July 30, 1901 [LAH]: “R. F. Stocking's catch of two weeks ago was fourteen pounds heavier than Mrs. Barrett's, but according to the rules he invalidated his claims to the glory there was in it by giving his rod to a companion to hold for a short time. F. S. Schenck of Brooklyn, N.Y., held the world's record with rod and reel for several years, with a black sea bass that weighed 384 pounds. Mrs. Barrett brought her fish to gaff in true sportsmanlike manner, and is entitled to the honor her pluck has richly earned, but being a woman she is not eligible to the gold button the Tuna club voted to award to the biggest catch of the season. Mrs. Barrett is also the only woman who has ever caught a black sea bass in Catalina waters with a rod and reel. Two other women, the late Mrs. Ross Jackson of San Francisco and Mrs. William Beckman of Sacramento, made catches of big bass here, but it was done with hand lines, which is not up to sportsmen's standards.”

July 4, 1902 [LAH]: “Avalon, July 3. — The Tuna Club held its annual banquet at the Hotel Metropole last night. In the bay window of the dining room a long table was spread for the twenty-four members and guests of the club and handsomely decorated with red rosebuds and carnations. The centerpiece was a marvel of the confectioner's art and stood in lieu of the usual baked tuna that was absent owing to circumstances over which the club members, or would-be members, had no control. Places were designated by cards bearing the printed name of each guest and the embossed crest of the Tuna Club in blue and silver. The scene was brilliant with innumerable electric lights, the individual intensity of which was subdued by delicately shaded globes. The gentlemen partaking of the banquet, which was served in admirable style, were as follows: Eugene Atwood, General A. W. Barrett, William R. Bentley, John Caffrey, Rev. F. W. Clampett, E. N. Dickerson, Colonel R. A. Eddy, R. W. Hersey, F. O. Johnson, Dr. H. W. Lance, General A. L. New, O. O. Orr, C. C. Paine, H. E. Paine, George S. Patton, J. H. Prince, F. J. Rabbeth, Frank V. Rider, A. M. Shields, E. T. Smith, Colonel John E. Stearns, William Wolff and representatives of the Los Angeles press. At the commencement of the banquet General Barrett, president of the club and acting as toastmaster, proposed that all should stand and in silence drink to the memory of Frederick S. Schenck, who would no more grace the board with his presence. Frank V. Rider, in responding to the toast, paid a fitting tribute to Mr. Schenck as a prince among fishermen and a gentleman of such sterling worth and kindly nature as to have endeared him to all who were so fortunate as to have made his acquaintance...”

[1906]: “The late Mr. F. S. Schenck, of Brooklyn, was the most devoted and untiring of all the jewfish anglers. The first summer his efforts were fruitless; the next he simply couldn't miss. Day after day, with Harry Elms as boatman, he would hook, fight, and boat fish, within a hundred feet of launches, which never had so much as a nibble. His largest, and for some time the world's record fish, weighed 384 pounds. His plan was to take great quantities of bait to throw over, at the end of the day whatever was left. This naturally resulted in drawing herds of all manner of fish to the place, including the jewfish. But this method also attracted tremendous sharks, which gave considerable annoyance by often taking the baited hook. This left the angler to choose between a lengthy, exhausting contest or the loss of so much line. However, such inconvenience was finally overcome by the substitution of a cod line leader for the piano wire, which quickly severed against the shark's teeth, but held the bass. Its nonkinking quality was an advantage over the wire also. This 'chumming' was also tried with success by Mr. T. S. Manning, formerly of Philadelphia, whose work at a certain abrupt promontory christened it Jewfish Point.” [Magazine Angling Stories, Vol. 5, 1906]