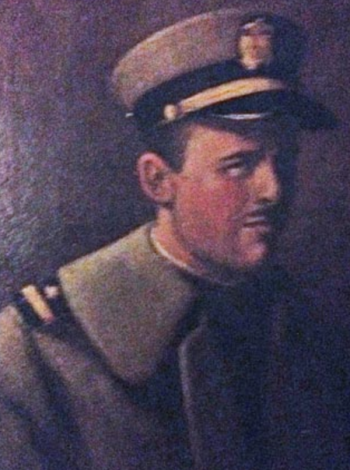 SCHMIDT, Karl (1890-1962) Massachussetts-born largely self-taught artist who began drawing and painting when he was very young. He graduated from Polytechnic Institute in Worcester after which he traveled to London where he studied art and painted seascapes of Cornwall and the coast of Brittany. In 1915 Schmidt moved to Santa Barbara where he was associated with the Harmer Studio. In 1918 he joined the Navy and became a commander.

Schmidt is known primarily for landscapes and marine paintings. He is known to have made at least one trip to Santa Cruz Island in 1915, although no island works have been located.

November 19, 1914 [SBMP]: “A late addition to the Santa Barbara artist colony in Karl Schmidt, who has recently opened a studio in the San Marcos building, where he has on exhibition a wonderful collection of marine views from the Maine and Brittany coasts. Through the years, Mr. Schmidt has carved for himself a niche in the art world, his canvasses having attracted considerable attention among those who know what is what in art. Mr. Schmidt is a brother to Heinrich Schmidt, the expert golf player, in fact the two brothers are twins with a resemblance that is confusing to friends. Mr. Schmidt has just opened is studio and plans at a near date to give an exhibition and tea. Of his work, an eastern paper says: "Among Worcester boys whose every move makes interesting reading are Karl and Heinrich Schmidt, sons of Mr. and Mrs. Henry F. A. Schmidt, 1 Melville street. "Those Schmidt twins have been picturesque factors in Worcester since the time when they began to attend Worcester polytechnic's institute, always together...”

March 18, 1915 [SBMP]: “Karl Schmidt, an artist who has won fame through his excellent work, is having a private exhibition of his paintings at Nathan Bentz's store, tomorrow and Saturday. The display represents Mr. Schmidt's work abroad, in different parts of America and particularly in Santa Barbara. The subjects consist of landscapes and marines, widely varying as to both subject and style, from the dainty, delicate pastoral to the majestic seascape depicting the tremendous forces of Old Ocean, in fierce onslaught on the rocky shore, and treated with the full virile strength needed for such a subject.”

June 30, 1915 [SBDI]: “Landscape and marine painters are finding Santa Cruz Island a source of inspiration for their creative efforts. This week there are three artists on the island. Edgar Payne left today on the Otter for Valdez Cave, and Karl Schmidt and Frederick Rhead are already there. Mr. Payne will stay a week, resting and doing landscape work.”