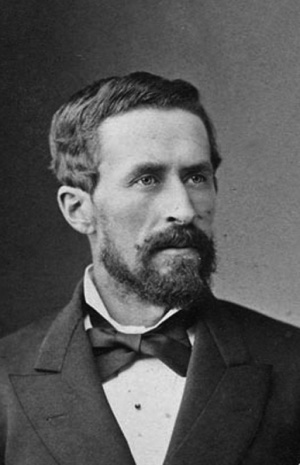 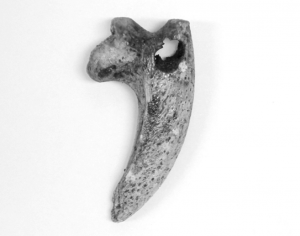 Bald Eagle talon collected by Paul Schumacher on Santa Cruz Island in 1875. [NMNH A18192-0/004199] Talon has been pierced prehistorically for wearing as an ornament.

SCHUMACHER, Paul (1844-1883), born in Hungary and educated in Vienna, Austria, as a Civil Engineer, he emigrated to San Francisco where he was hired in 1871 by the U.S. Coast Survey. Schumacher was naturalized as a citizen on September 7, 1874 in San Francisco. While traveling the state of California for his work, Schumacher developed a keen interest in archaeology. Between 1872 and 1879 he collected artifacts that were sent to the Smithsonian Institution from six of the eight Channel Islands. He visited the islands less than 50 years after their depopulation by Native Americans.

Schumacher visited Santa Cruz Island in 1875, and spent three months amassing a collection of Chumash artifacts for the Smithsonian to be viewed at the 1876 Centennial Exposition in Philadelphia, PA held May 10-November 10, 1876. It was the first official World's Fair, held in Philadelphia, PA. Schumacher supplied the Smithsonian Institution with artifacts from the Chumash region for the Exhibition, as did William H. Dall and Stephen Bowers.

Schumacher’s island excavations began only about 50 years after the last Island Chumash villages were abandoned, although Chumash people continued to visit the islands as employees of colonial fishing, otter hunting, or ranching operations.

In 1877 he was the first recorded archaeologist to visit San Clemente Island, the most southerly of the California Channel Islands. In 1875, 1877 and 1878 he excavated a number of sites on Santa Catalina Island, where he also collected plants in June 1878. A raven skull he collected on Santa Catalina Island is in the U.S. National Museum of Natural History (#15662); a dog skull he collected on San Miguel Island is also in the Smithsonian.

Schumacher is also the first known to have done archaeological work on San Nicolas Island (1877).

From the 11th Annual Report of the Peabody Museum of Archaeology and Ethnology, Cambridge, 1878.
[original in SCIF archives]

June 20, 1874 Schumacher to Captain C. P. Patterson, Superintendent of the U.S. Coast Survey: “These [archaeological] collections have awakened in me the earnest desire, now more than ever, to be placed in such a position as would render it possible for me to explore the Santa Barbara islands, which, although they have been visited several times, have never been carefully searched and explored for such material and this mostly because it takes up a good deal more time than has been spent for this purpose yet... As the Smithsonian Inst. always gives a credit to each of its collectors for the articles sent, this alone would be sufficient incentive to me to do my very best in this field; and as to my capacity as Topographer, I leave my work done while in the service of the U.S. Coast Survey, to speak for itself.”

August 3, 1875 [DAC]: “The remarkable group of islands off our southern coast was once thickly populated by a people whose food consisted mainly of edible shellfish, principally of the abalones and the mussel. Among the shells that have accumulated as kitchen refuse, on many places along the shores, and even on higher slopes on the islands, Mr. Paul Schumacher, sent out by the Smithsonian Institution to continue his successful exploration of a year past, searched the graves of a gone-by population, which are found near the kitchen refuse, and the places where formerly their houses stood. With the skeletons were found buried the implements of stone, shells and bone. On the islands he especially brought to light many new forms of implements for hunting and fishing; also ornaments of great variety, worked out of stones, bones, and particularly of the beautifully-colored shell Haliotis [abalone]. In recent graves he even found glass beads of somewhat rococo style and made of a kind of glass not now found in the Bohemian glass factories. Such finds may date from the discovery of California by Cabrillo, in 1542, who reported some of these islands as having been thickly populated. The kitchen utensils consist of pots of all sizes and forms, worked out of magnesia and mica, and of bowls made out of serpentine—all polished. The mortars are chiselled out of sandstone and often handsomely ornamented, some even with bas-relief, as found on San Nicolas Island; others again with shells sunk in the upper rim cemented with asphaltum. The islanders, as well as those living on the mainland, have been, no doubt, clever smokers, as pipes are not rarely found. Of works of art, sculptures were found representing sea lions, fish, fowls and idols, etc. This work, done either in soapstone or serpentine, is neatly executed and polished. After the exploration on the island was done, Mr. Schumacher went over to the mainland (where in the meantime a division of Wheeler’s exploring party, under Dr. Yarrow, was busily engaged in exhuming antiquities and in exploring the historical site of Dos Pueblos), and completed his collection with all such articles and varieties of forms as are found in that part of our coast. His collections made for the Smithsonian Institute in 1874, together with that of this year, which comprises over 70 cases, will be a full representation of the archaeology of the southern coast of California. As the season has advanced and the Smithsonian Institute is desirous that Mr. Schumacher should visit the coast of Oregon, where he obtained some results two years ago, he has left the lower coast, and is now in this city [San Francisco] preparing for the northern trip. He requests us to acknowledge the courteous assistance of some of our Government officers, and the liberal favors of the Pacific Railroad Companies. Mr. Schumacher is soon going to leave for Oregon, and as the pursuit of his exploration is by no means a small task, more so in a country where the still living Indians may interrupt such investigation with a strong desire to take the scalp of the explorer, we hope that our Oregonian friends will give him a kindly reception and such advice and assistance as they can conveniently.”

November 16, 1877 [SBDP]: “Professor Paul Schumacher, an agent of the Smithsonian Institution, has arrived in Los Angeles after a three months’ sojourn on Catalina Island. His business was the collection of antiquities and archaeological specimens, and, as a result of his research he sent from the island twenty-four boxes of arrowheads, mortars and other relics.”

January 2, 1878 [SBDP]: “Professor Paul Schumacher, of the Smithsonian Institute, recently spent some time on Santa Catalina Island, which lies a few miles seaward of Wilmington Harbor. From a gentleman who followed Schumacher on his visit at a remove of a few weeks, we learn that the Professor discovered quite a number of interesting relics during his stay there. Our informant, impelled by emulation, started out to make discoveries for himself. Accountered with a pick and shovel, and assisted by a couple of muscular men, he set to work near the Isthmus. He shortly found that he had happened upon an abandoned graveyard. Human bones and skulls were disinterred on all hands. Various curiosities were also thrown up, amongst them a stone hachet and a pipe, which had been hollowed out of soapstone... There are on it [Santa Catalina] probably seven or eight thousand wild goats, a few wild bulls and cows and about eighteen thousand sheep. The latter were very poor and weak prior to the late rains, and the probability is that many of them have since died. Those which have survived, however, will form the nucleus of a profitable business venture. There is excellent fishing about the Santa Catalina Island, and the island is much resorted to both by parties in search of sport and gain.”

July 24, 1878 [SBDP]: “Indian Relics. The Los Angeles Herald says: “Professor Paul Schumacher of the Smithsonian Institute, who has been engaged for some months past in investigating the tumuli of this county and of the San Clemente and Santa Catalina islands, will leave here on Wednesday to explore similar deposits of Indian antiquities between Point Sal and Point Conception, in Santa Barbara County—the only district which has not been explored for archaeological remains by the Professor between Oregon and the Mexican line…”

July 23, 1882 [LAT]: “…Little attention, writes Assistant Surgeon H. C. Yarrow, was paid to these islands until 1873 when Mr. W. G. Harford, of the United States Coast Survey, happening to visit San Miguel and Santa Rosa, obtained a collection of interesting objects. This falling into the hands of Mr. W. H. Dall was deemed by him of such interest as to induce him to visit these islands in 1874. During the same year Mr. Paul Schumacher investigated the main coast… and in 1875 Mr. Schumacher was named to conduct the work [on the islands]…”

June 2, 1883 [SBDP]: “Death of Professor Schumacher. Professor Schumacher is the gentleman who made an extended exploration of the islands opposite Santa Barbara about one year ago and who made an exhibition of relics gathered on the islands in the Stearns building at that time. The numerous friends and relatives of Professor Schumacher, will be pained to learn of his death, which occurred at San Antonio, in Mexico, May 22nd, 1883… He was in the service of the Smithsonian Institute for several years and passed much time in examining prehistoric mounds and other antiquities. After leaving the service of the government, he married Miss Caroline Schumacher of Los Angeles who now resides in this city. The Professor was a Hungarian by birth, educated in Vienna, Austria, and apparently 44 years of age.”

August 25, 1889 [LAT]: “Avalon… One day Professor Schumacher, a representative of several eastern scientific museums and colleges appeared on the scene. He hired Mexican Joe, and by the aid of charts and maps began a series of excavations which resulted in the collection of a fine lot of implements from this island…”