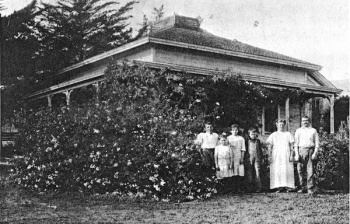 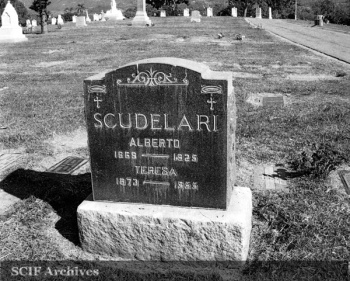 SCUDELARI, Alberto (1869-1925), well-known Italian-born [Tremosine, Italy] Goleta farmer and rancher who came to Santa Barbara when he was 16 with Francisco Zuradelli. For six years, beginning in 1884, Scudelari worked on Santa Cruz Island, after which he managed the Glenn Annie Ranch at La Patera. Soon thereafter with land of his own, he planted lemons, walnuts and beans. In 1898 he married Teresa Erbetti (1873-1955) and they had three surviving children:

By 1825 Alberto Scudelari owned the Carlton Hotel at the corner of Haley and State streets in Santa Barbara, but the 1925 earthquake caved it in. Lumber from the hotel was later used to build the house at the top of the hill on Fairview Avenue.

Alberto Scudelari died at age 56 on August 17, 1925. His wife, Teresa, died January 11, 1955 at age 81. They both are buried in Santa Barbara at Calvary Cemetery. Teresa’s brother, Carlo Erbetti, was superintendent on Santa Cruz Island at the turn of the century.