SEXTON, Horace (1885-1971), Santa Barbara-born son of Joseph Sexton and Lucy Ann Foster, the large and prominent Goleta family, he made repeated visits to Santa Cruz Island. August 20, 1907 he returned from a Santa Cruz Island excursion aboard Gussie M with about two dozen friends. In 1922 he kept an account of a two week camping trip to Santa Cruz Island. Sexton was also a friend of both photographer Ralph Paulin and Captain Mortimer Rodehaver and they traveled to the islands together. 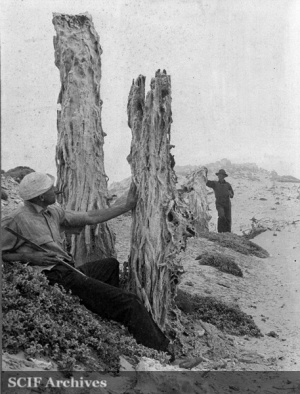 August 28, 1906 [SBMP]: “The sailboat Vixen, in charge of Captain Don Leach, made a trip to Santa Cruz Island on Saturday with Edgar Montague, Horace Johnstone, Horace Sexton, and Teddy Conant aboard...”