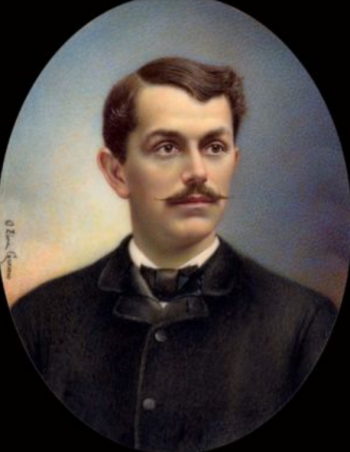 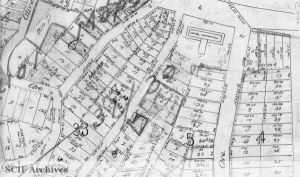 At the age of 37 in 1887, real estate speculator George Rufus Shatto bought Santa Catalina Island from the Lick estate. 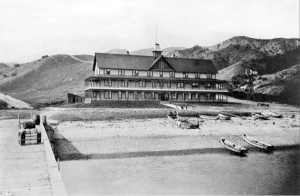 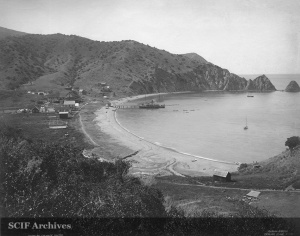 SHATTO, George Rufus (1850-1893) was born in Chatham, Ohio, on August 15, 1850, the seventh of eight children. He moved to Grand Rapids, Michigan where he became interested in business and real estate speculation. He relocated to California where he purchased all of the interests in Santa Catalina Island in 1887 for $200,000 from the trustees of the Lick estate. Shatto was the first investor to envision the development of a resort town in Avalon, the bay named by his sister, Mrs. Etta J. Marilla Whitney, after a line in Alfred Lord Tennyson’s poem, Idylls of the King. Until that time, Avalon was known at Timm’s Landing. Shatto spent $40,000 on engineering surveys, maps and plans, and he subdivided the area, laid out streets, and auctioned lots for $150 to $2000 where people pitched tents and built summer cottages. In 1887, Shatto’s map of Avalon included the following street and avenue names:

In 1888 Shatto built the once magnificent Hotel Metropole, a steamer pier, and owned two steamers, SS Ferndale + ?, which ferried people back and forth from the mainland. Four years after his island purchase however, Shatto was unable to keep up with his debts, and the trustees of the Lick trust from whom he had purchased the island foreclosed on Shatto, reselling the island to the Banning brothers. The Shatto years spanned from 1887 to 1892. The following year Shatto was killed in a train accident while returning from the Mojave Desert. He was 42 at the time of his death on May 13, 1893. He is buried in Rosedale Cemetery [Angelus-Rosedale Cemetery], Los Angeles County, in a large stone pyramid. His wife, Clara “Claressa” Ruth (1853-1942), died in Beverly Hills in March 1942 at 89.

August 27, 1887 [LAH]: “Geo. R. Shatto, the purchaser of Santa Catalina Island, sues to eject George Bryant from a portion of his new possessions.”

[1888] July 1, 1937 [TI/Avalon]: From a letter written by the Misses Geneva R. and Annie L. Wheeler at the time of Sophie Wheeler’s death. “…In connection with the sheep grazing interest, the paying over of the yearly rental by Captain Whittley to Mr. Shatto, as it was done one year in Mrs. Wheeler’s parlor, was a matter of interest and some amusement to her. With the formality and gracious dignity befitting a Don, in his best attire, with the best saddle and mount, he had ridden over the trails down into Avalon to pay over the entire two thousand dollars in gold. He had made a special trip to his Los Angeles bank to get it in gold, bringing it over in one of his sloops to his camp farther west on the island perhaps White’s Landing…”

June 1, 1893 [LAT]: “Death on the rail. Collision between two freight trains near Ravenna. George R. Shatto, the well-known capitalist, killed…George R. Shatto was riding in the caboose at the time…At the time the accident occurred Mr. Shatto was lying down in a berth, with his head toward the rear of the car… Mr. Shatto was the only one killed… He leaves a widow…”

June 2, 1893 [LAT]: “The untimely death of George R. Shatto of this city in the railroad accident at Revenna is a matter of universal regret. Mr. Shatto was rated among our most enterprising citizens, and he was of the sort that we can ill afford to lose.”

June 2, 1893 [LAT]: “An inquest was held yesterday afternoon by Coroner Cates on the body of George R. Shatto, who met with such a sudden and shocking death in the railroad accident Wednesday night at Ravenna, but beyond the facts of the occurrence as already published, nothing further was learned…”

June 8, 1893 [RWG]: “Nothing further has developed in the railroad accident at Ravenna. The inquest over the body of George R. Shatto, the capitalist who was killed, is now in progress. The news of her husband’s death was broken to Mrs. Shatto this morning by Rev. Dr. Campbell…”

July 16, 1907 [LAT]: “Nominal damages were awarded the Meteor Boat Company against the Catalina Island Company, in a written opinion handed down by Judge Conroy yesterday, and Avalon Harbor is open to all the world. On various minor points the Bannings are sustained in their contentions, but the one important question of landing privileges at Avalon is decided against them and a free harbor is the result. The strip of land in front of the hotel, between Crescent Avenue and the sea, is declared the private property of the Bannings, but the avenue is declared open from the sea, to all who may care to land there without patronizing the Wilmington Transportation Company, for several hundred feet at its eastern end, from the eastern line of Catalina Avenue. The injunction suit, brought by the Catalina Island Company with the hope of establishing sole ownership of the landing privileges, asked that the Meteor Boat Company be restrained from destroying or molesting the wire fence which the Bannings had seen fit to erect along the beach line to guard the county road against invasion from the sea. In the opinion handed down by Judge Conroy, the Catalina Island Company is restrained from maintaining such a fence east of Catalina Avenue. In the original complaint the fence, which the defendant company had torn down on two occasions, was referred to as a most admirable fence, and the size and strength of the redwood posts were dwelt upon at length, to show the full enormity of the raid which resulted in the cutting of wire and the breaking of posts. And now, under Judge Conroy’s decision, the employees of the Bannings, who also are said to have fought heroically in defense of the barbed wire fortifications of fair Avalon, must themselves tear down the fence which they defended. In cross-complaint the Meteor Boat Company had denied the right of the Catalina Island Company to prevent landing on any part of the beach, and crossing to Crescent Avenue, a county road on which the county’s money has been spent. It was alleged that the private lot owners on the island were entitled to a right of way, by necessity, to the sea, which must form their highway to the outer world, and the argument was made that these lot owners, and the general public, must have access to Crescent Avenue at every point. This is denied in the opinion of Judge Conroy, who says: ‘The argument for a right of way by necessity fails, as to the public, as soon as it becomes established that the said strip of land does not extend along the entire water front. Since it is to be established by the decree in this case that the street extends to ordinary high-water mark, for a distance of several hundred feet at the easterly end of Crescent Avenue, it follows that the public will have adequate facilities for passing from the bay to the street, and so on into any part of town. This applies equally well to the argument for a private was of necessity in favor of the lot owners, who acquired their titles from Shatto or his successors during the short period when property in the town was on the market for sale.’ Judge Conroy holds that, in 1887, Mr. Shatto owned all the island, and that it is apparent that in laying out the street, Crescent Avenue, it was his purpose to retain a strip between it and the sea part of the way, notably in front of the hotel, but not all of the way.’”

July 3, 1917 [TI/Avalon]: “Mr. and Mrs. E. J. Whitney of Claremont and Mrs. Shatto are island visitors registered at the Glenmore.”

December 31, 1924 [TI/Avalon]: “We understand that Mr. and Mrs. J. H. Whitney and Mrs. G. R. Shatto, well-remembered early residents of Avalon, celebrated the Christmas holiday at Bethlehem, Palestine, the birth place of Jesus of Nazareth, whose name is honored in all Christmas celebrations.”

March 11, 1942 [San Pedro News Pilot]: “Avalon founder widow passes. Mrs. Clara R. Shatto, whose name was linked with the early history of Santa Catalina Island and the founding of the town of Avalon in 1887, died yesterday at her Beverly Hills home. She was 89. Funeral services will be held tomorrow in the Los Angeles Congregational church chapel named for her family. Mrs. Shatto was the widow of the pioneer Los Angeles realty developer, George Shatto, and participated in several subdivisions after her husband died in 1894 [1893]. He had paid $200,000 for Catalina Island in 1887, founded Avalon and built the Metropole Hotel there, then sold the island to the Bannings in 1892.”