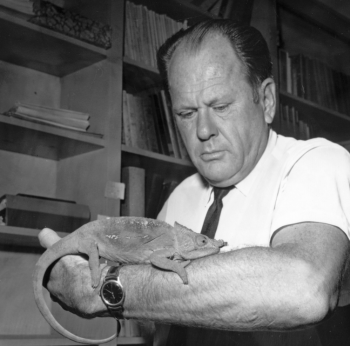 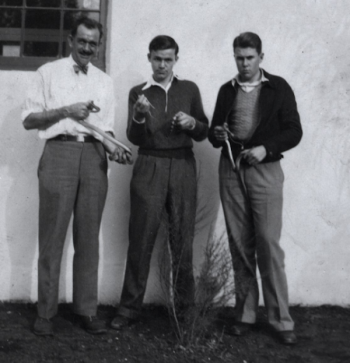 C. B. Perkins (left) with Sheldon Campbell and Chuck Shaw.

SHAW, Charles Edward (1918-1972) was born in San Diego, He began his apprenticeship as a herpetologist before he was a teenager. Much of his childhood was spent at the San Diego Zoo, where his interest in reptiles was fostered by C.B. “Si” Perkins, the zoo’s curator of reptiles. Later, he became a student assistant to Laurence M. Klauber, cataloging countless rattlesnakes in Klauber’s basement laboratory. Shaw began his “official” career at the San Diego Zoo as a reptile keeper. In 1954, he succeeded C.B. Perkins as curator. When the University of California Press published L.M. Klauber’s Rattlesnakes: Their Habits, Life Histories, and Influence on Mankind in 1956, “Si” Perkins and Chuck Shaw were the first of many to be acknowledged for their contributions to this two-volume definitive work.

His scientific writings appeared in Copeia, Herpetologica, Salamandra (which included him on its editorial board), Zoologica, Journal of Herpetology, Der Zoologische Garten, and numerous other professional and popular publications. He was a frequent contributor to International Zoo Yearbook. He coauthored Snakes of the American West with Sheldon Campell, a lifelong friend and former Zoological Society trustee.

Fieldwork was a special passion for Shaw. He made copious records of his behavioral and physiological observations, noted changes in climate, and took the temperatures of unsuspecting lizards. He jumped at the chance to take students and visiting scientists from all over the world on field trips to the desert. From students to the elder statesmen of the herpetological world, Shaw’s friends and colleagues spanned five decades of dedicated science. His influence has been felt and his research notes sought after by rising herpetologists in the 30-plus years since his untimely death in 1971. In September of that year he was posthumously awarded the Zoological Society of San Diego’s conservations medal.

Perhaps Chuck Shaw’s greatest gift to his chosen field was the mentoring, time, attention, and friendship he extended to subsequent generations of budding herpetologists. His door was always open to young hobbyists and aspiring professionals.

The Klauber-Shaw Reptile House at the San Diego Zoo recognizes two extraordinary herpetologists whose achievements grew from their all-consuming hobbies.