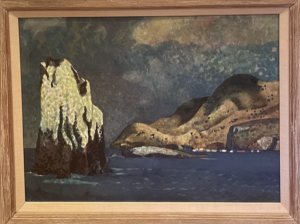 SHEETS, Millard Owen (1907-1989), was an American artist, teacher, and architectural designer. He was one of the earliest of the California Scene Painting artists and helped define the art movement. Many of his large-scale building-mounted mosaics from the mid-20th century are still extant in Southern California.

His paintings are in the Metropolitan Museum of Art and the Whitney Museum in New York, the Chicago Art Institute, the National Gallery in Washington D.C.; and the Los Angeles County Museum.