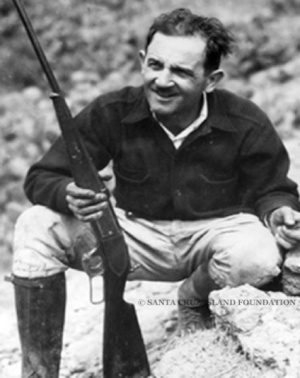 SHELDON, Henry “Harry” Hargrave (1883-1977), a California-born field naturalist with the United States Biological Survey, and biologist at the University of California Los Angeles who made several collecting trips to the California Channel Islands.

Sheldon was a friend of the Caire family, and he stayed on Santa Cruz Island several times in the late 1920s and early 1930s where he enjoyed hunting wild boar. Sheldon and Frederic Caire’s second daughter, Marie, were special friends, although as a divorced man, he was ineligible to court Marie due to her Catholic faith and prohibitions from her father.

The October 1931 Santa Barbara Museum of Natural History Bulletin reported that Sheldon “brought back from near the summit of Mt. Diablo, the highest peak on Santa Cruz, twigs of an oak” of interest to science. In January 1932 he gave the museum a “fragment of a fossil log from Santa Cruz Island.”

Sheldon was a collector for friend and fellow biologist, Donald Ryder Dickey (1887-1932). A bald eagle skeleton Sheldon collected on Santa Cruz Island in February 1929 is in the Dickey Collection [LACM 22944].

In May 1929, human remains representing, at minimum, 4 individuals were collected by H. H. Sheldon on San Nicolas Island and donated to UCLA. No primary documentation or specific provenience information beyond their San Nicolas Island origin exists for these human remains. No known individuals were identified. No associated funerary objects are present. [Notice of Inventory Completion: U.S. Department of Defense, Department of the Navy, Washington, DC (i) Navy-Controlled SNI Human Remains and Associated Funerary Objects at the Fowler Museum at UCLA, 2015]

July 21, 1977 [CR]: “Services were held Tuesday, July 19 for Henry Hargrave Sheldon, 93. He was a native of San Francisco. He was a naturalist and a wildlife photographer and he worked for the government in the Bureau of Natural Wildlife. He leaves his wife, Julia Sheldon, Cloverdale. He is the brother-in-law of Albert and Marie Akesson, Cloverdale, and Victor and Ardis Jablonski, Laytonville. He also leaves numerous nieces and nephews. He was a member of Cloverdale Senior Citizens…”