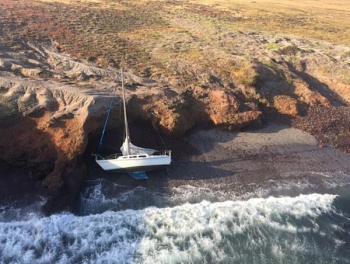 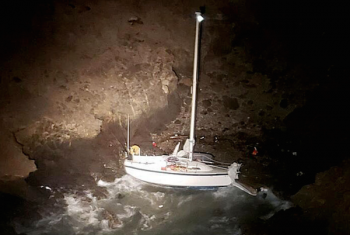 October 28, 2019 [Edhat]: “The Coast Guard rescued a man Monday morning after his sailboat ran aground at Scorpion Anchorage near Santa Cruz Island. The man aboard the sailboat contacted Coast Guard Sector Los Angeles-Long Beach watchstanders via VHF channel 16 concerned that his vessel was dragging anchor after it had been overtaken by bad weather. Watchstanders launched a Coast Guard Station Channel Islands Harbor 45-foot Response Boat-Medium crew and a Coast Guard Air Station San Francisco Forward Operating Base Mugu MH-65 Dolphin helicopter crew to assist. After arriving on scene, the Station Channel Islands crew started to pass towing instructions to the mariner. Before they could set up to tow, the sailing vessel was struck by three large waves breaking the vessels anchor line and causing the vessel to drift into a cove too dangerous for the 45-foot response boat to enter. Once the Coast Guard helicopter arrived on scene, the crew hoisted the man into the helicopter and transported him to Forward Operating Base Mugu with no reported medical concerns.”

October 28, 2019 [Noozhawk]: “A man was rescued early Monday after his sailboat ran aground at Scorpion Anchorage near Santa Cruz Island, according to the U.S. Coast Guard. The man, who was not identified, reported that his vessel was dragging anchor after it had been overtaken by bad weather, the Coast Guard said. He contacted Coast Guard Sector Los Angeles-Long Beach watchstanders on VHF marine channel 16. The Coast Guard Station dispatched a 45-foot response boat from Channel Islands Harbor and a MH-65 Dolphin helicopter from Point Mugu to assist. After arriving at the scene, the Coast Guard boat crew began to pass towing instructions to the mariner, according to the Coast Guard. They attempted to set up to tow, but the sailing vessel was struck by three large waves, breaking its anchor line, and causing the sailboat to drift into a cove too dangerous for the 45-foot response boat to enter, the Coast Guard said. A Coast Guard helicopter hoisted the man from the sailboat and transported him to Point Mugu. No injuries were reported. The owner is working with Vessel Assist to remove the boat, Channel Islands National Park spokeswoman Yvonne Menard said Monday afternoon.”