September 9, 1925 [SDET]: “San Pedro. A message stating that the motor yacht Helene was out of gasoline and helpless northwest of San Clemente Island was picked up in a bottle at Newport Beach and turned over to custom officials here. All the Helenes and Helens of the port were found to be at anchor or otherwise accounted for. The message was dated August 30.”

February 22, 1927 [SDET]: “Police probe mystery of fisherman. Investigation of the mysterious disappearance of Capt. Henry Smith, jig-boat fisherman of San Pedro, is being conducted today by San Pedro port police and sheriff's deputies, after it was learned yesterday the Captain Smith's watch had been returned to his mother, Mrs. M. L. Simpson of 2856 Fifth Street, San Diego. Captain Smith's boat, the Katherine, was found drifting off San Clemente Island February 4, according to the story told police by J. E. Swanson, also a San Pedro fisherman. The boat was crewless, and Swanson said that the only thing he found aboard it was Smith's coat with his watch in it. Mrs. Simpson here was given the watch by Elizabeth Jerue, a San Pedro acquaintance of Smith. Mrs. Jerue told San Pedro police that she returned the watch after it had been given her by Swanson. Swanson is said to have acquired approximately $300 as salvage money from Capt. Smith's Katherine, now in custody of Mrs. Jerue, according to information learned yesterday by the police at San Pedro. Swanson is thought to be at sea now on a fishing trip.”

May 18, 1931 [SDET]: “Guards rescue stranded fish boat crew. Abandoning their fishing boat, the San Gabriel, after it caught fire Saturday morning 20 miles from Pyramid Cove, San Clemente Island, three San Diego fishermen were rescued yesterday from the island by Coast Guard cutter No. 253. The three were S. L. Stanley, captain, Paul Iviovic and Eugene Garcia. Except for slight burns received by Garcia, the fishermen were uninjured, although they suffered from lack of food. The fire of undetermined origin broke out on the boat at 8 a.m. Saturday. The fishermen abandoned their craft after battling the flames unsuccessfully for two hours. The 20-mile trip to Pyramid Cove was made in a small skiff, which had no oar locks. The Coast Guard cutter, commanded by Boatswain L. H. Williams, sighted the fishermen yesterday noon, when they signaled as the cutter swung past Pyramid Cove. The San Gabriel, a 65-ton craft, was owned by R. Hopkins of San Diego. Three tons of iced fish were aboard.”

November 8, 1969 [LAT]: “A sinking cabin cruiser with two persons aboard was towed into a sheltered inlet on San Clemente Island by a Navy torpedo boat Thursday night. The 26-foot San Clemente radioed for help after it was caught in a rain squall and began taking on water.”

November 10, 1969 [Nevada State Journal]: “Navy Rescues Cabin Cruiser. Long Beach—A sinking cabin cruiser with two persons aboard was towed to safety by a Navy torpedo boat less than an hour after the craft radioed for assistance. The Navy craft towed the 26-foot San Clemente to Wilson's Cove, a sheltered inlet on San Clemente Island. The cruiser was caught in a rain squall and was taking on water when it sent out the distress call.”

August 31, 2017 [Catalina Islander]: “Two Harbor deputies handled a boat accident investigation where a boat went aground at San Clemente Island. The U.S. Coast Guard airlifted the boater off the Island. There were no injuries.”

October 16, 2020 [KTLA 5]: “Federal agents rescued 19 people whose boat caught fire earlier in the week, leading them to swim ashore at a Navy training facility on San Clemente Island.U.S. Border Patrol agents got a call around 6:45 p.m. on Tuesday, Oct. 13, about four people who swam ashore at the Naval Auxiliary Landing Field, KTLA’s sister station in San Diego, KSWB, reported. The island, located about 70 miles west of San Diego and just south of Santa Catalina Island, is a research and development facility owned by the U.S. Navy with a live firing range. Agents said they determined the four people were passengers on a panga, a small boat commonly used for human smuggling. They told agents the boat’s engine caught fire, causing some passengers to swim ashore. They said other passengers rowed the boat to shore. Border Patrol’s Border, Search, Trauma, and Rescue team worked with the U.S. Coast Guard and Navy to find the other passengers. Navy personnel found three while Border Patrol enlisted help from search and rescue K-9s. In total, they located 19 survivors. The group was made up of 16 men and three women between 17 and 45 years old. Border Patrol agents said they were Mexican nationals suspected of trying to enter the U.S. illegally. One man complained of abdominal pain and was flown to the Naval Air Station North Island then taken to a local hospital for treatment. Agents treated four other people in the group for minor injuries. Border Patrol said 18 people were taken to Ballast Point and turned over to Border Patrol agents. Two men face smuggling charges, agents said. 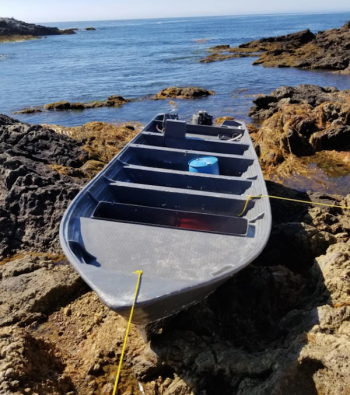 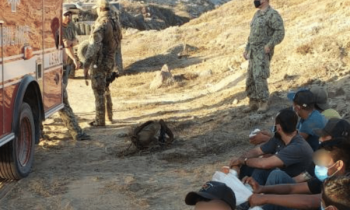 October 16, 2020 [ABC 10]: “(KGTV) — Border officials say 19 people were rescued after the engine of the panga boat they were on caught fire near San Clemente Island this week. The shipwreck happened on Tuesday when a boat carrying 19 undocumented migrants became disabled just before 7 p.m. Four people abandoned the panga boat and swam to shore at Naval Auxiliary Landing Field on San Clemente Island. After the four people were questioned, they were identified as passengers on the panga boat and part of a human smuggling operation. The four people also indicated other passengers had paddled the damaged boat to the island's shore and got off. The next day, at about 6:30 a.m., a helicopter lifted to search for the remaining individuals, who were all found by about 5 p.m. The group consisted of 16 men and three women, all between the ages of 17 and 45, and all Mexican nationals illegally in the U.S. One man complained of abdominal pain and was taken to the Naval Air Station North Island, and then a local hospital for treatment. An additional four people were treated by border agents for minor injuries. Two men face human smuggling charges. The remaining individuals were turned over to Border patrol for processing.”

October 18, 2020 [americanmilitarynews.com]: “DHS agencies, US Navy rally to rescue 19 shipwrecked on San Clemente Island. The U.S. Border Patrol’s Border Search, Trauma, and Rescue (BORSTAR) team assisted federal partners during a search and rescue event Wednesday. It began when a boat carrying 19 undocumented aliens became disabled Tuesday night near San Clemente Island. At approximately 6:45 p.m. on Tuesday, San Diego’s Joint Harbor Operation Center received a phone call indicating that four individuals had swam ashore at the Naval Auxiliary Landing Field on San Clemente Island. The island, which is a key research and development facility, supports naval tactical training and is home to a live firing range. Upon questioning, the four people were identified as passengers on a panga boat being used for human smuggling. Their boat had become inoperable when the engine caught on fire and they swam to shore. The four people also indicated that several other passengers had paddled the damaged panga to the island’s shore and disembarked. The U.S. Coast Guard (USCG) and BORSTAR agents were contacted to assist with transportation and a search for the remaining people on the island. On Wednesday, at approximately 6:30 a.m., the USCG launched a helicopter to conduct a first-light search for additional people. At approximately 7:30 a.m., a USCG Cutter arrived at San Clemente Island and discovered that an additional three people in the group had been located by U.S. Navy personnel. By 2 p.m., USCG and U.S. Customs and Border Protection’s Air and Marine Operations helicopters had transported six BORSTAR agents and two search and rescue canines to assist with the search.By 5 p.m. on Wednesday, a total of 19 people had been located. The group consisted of 16 men and three women, all between the ages of 17 and 45, and all Mexican nationals illegally present in the U.S. One man in the group complained of abdominal pain and was flown to the Naval Air Station North Island, then transported to a local hospital for further treatment. An additional four people in the group were treated by BORSTAR agents for minor injuries. The remaining 18 undocumented aliens on San Clemente Island were transported to Ballast Point and turned over to U.S. Border Patrol agents for processing. Two men in the group face alien smuggling charges. “I am proud of the collaboration and professionalism demonstrated during this life-saving, multi-agency rescue operation,” said Chief Patrol Agent Aaron Heitke. “Dangerous maritime smuggling attempts like this are indicative of smugglers’ callousness and disregard for human life.”