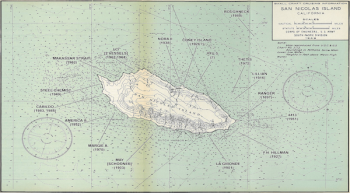 April 25, 1909 [LAH]: “Laughs at Plans of Rescue Party. M'Millan returns safely in launch May. Finds skeleton of huge whale on San Nicholas [sic] Island deeply buried in sand—encounters strong wind. Long Beach, April 24.—Asserting that he had been in no trouble, and that his store of provisions would have lasted four days longer, Milton McMillan, who returned to San Pedro late last night in the launch May from San Nicholas [sic] island, laughed at the plans which were being made to start a rescue party. The trip home from the island was made in twelve hours. The May is schooner rigged and came home with sails full of wind.Tonight McMillan started for San Nicolas with a larger party. The object of his trip was to secure the skeleton so buried in the sand that some time will be required to exhume it. En route, McMillan encountered strong winds and put in for shelter at Catalina island, and later at Santa Barbara island.”