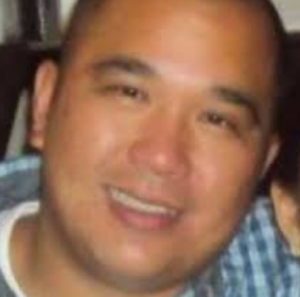 “Sophorn Bun Sieng, known to many people as Ponch or Chino, died suddenly on Saturday doing what he loves doing most, fishing. Sophorn was born on November 4, 1974 in Cambodia and was originally from East Los Angeles. He has been a County resident for the past 18 years. He worked as a skilled maintenance worker for St. Johns Pleasant Valley in Camarillo. Sophorn's life would seem too short to many, but those who were touched by him understood that the quality of existence far exceeds the quantity of time in which one lives. He was a man of many skills: a handyman, a mechanic and most of all a baker. He was a professional baker and baked beautiful and delicious cakes on his spare time. He is survived by his wife, Nennie, his two children Justin and Jordenne. His sister Cynthia, husband David of North Carolina; brothers; Chris, wife Theary of Long Beach, Sam, wife Satia of Arizona and Woody of Cambodia. His parent in laws, Zosimo and Eva Romero of Oxnard. Brother in laws from Ventura; Von, wife Karen, and Joey, wife Steffanie; his sister in law, Yvette, husband Arnie of Oxnard. He was the fun and crazy Uncle, and will be missed for his antics by numerous nephews and nieces. He is also survived by many Aunts, Uncles, cousins and friends from Nevada, Arizona, North Carolina, Texas and Canada. Visitation will be held from 4 to 8 p.m. with an evening Vigil/Rosary at 6:30 p.m. on Friday, March 16, at Santa Clara Mortuary, in Oxnard. The Funeral Service will be at 11:30 a.m. on Saturday, March 17 at Santa Clara Mortuary. Burial will follow at Santa Clara Cemetery.”

March 12, 2012 [LAT]: “Bodies of 3 men recovered after boat found near Santa Cruz Island. The Coast Guard recovered the bodies of three men whose 24-foot recreational boat was found capsized near Santa Cruz Island after a family member reported it missing Sunday morning, officials said. Searchers spotted the body of a fourth man who was on the boat but were unable to recover it, Petty Officer Adam Eggers said Sunday night. None of the men was wearing a life jacket. Eggers said he was prohibited by Coast Guard policy from releasing the victims' names. No one answered the phone at the Santa Barbara County coroner's office, which is involved in the case.”

March 13, 2012 [VCS]: “Authorities ended the search for a fourth Ventura County man believed to have died after a boat capsized during a weekend fishing trip near Santa Cruz Island. The search ended Tuesday, and Jose Juan Perez, 37, of Camarillo is presumed dead. He will be listed as a missing person, Santa Barbara County sheriff's spokesman Drew Sugars said Tuesday. Authorities began searching waters around Santa Cruz Island with a helicopter and two Coast Guard vessels Sunday after Perez and three fishing companions failed to return as planned from a day trip to the island. They left Channel Islands Harbor in Oxnard on Saturday morning and were expected back that same night. Perez's friends were found dead Sunday afternoon near their 24-foot boat several miles from the island, authorities said. They were identified as Edgar Allen Isnec, 54, of Port Hueneme; Sophorn Bun Sieng, 37, of Oxnard; and Ramiro Alvarez Duarte, 52, of Oxnard. Perez's apparently lifeless body was seen from a helicopter, but it was gone by the time a vessel arrived to recover it, officials said. Divers covered a wide swath while searching the area Monday but did not find Perez, who owned the boat, Sugars said. Officials received no distress signal from the vessel, its hull had no major damage, and the men recovered were not wearing life jackets, officials said. The top side of the boat was damaged, but whether the damage occurred before or after the craft capsized was unclear, said Petty Officer Adam Eggers, a Coast Guard spokesman. A preliminary investigation suggests the three men recovered died from hypothermia and/or drowning, Sugars said. Official determinations won't be made until authorities get toxicology results, which can take weeks. The bodies showed no signs of trauma, and the deaths did not appear suspicious. Why the boat overturned on a day of mild weather, choppy seas and water temperatures in the 50s also remained unclear, Coast Guard officials said. Because there were no survivors, that mystery will likely remain unsolved, authorities said. Born and raised on the Hawaiian island of Kauai, Isnec joined the Navy after high school and settled in California, said his niece Desiree Fleming. He was married and had three grown children. The second of six siblings, Isnec was an even-keeled, mellow and curious man, said Fleming, 39, of Oahu, Hawaii. An avid surfer and fisherman, he felt at home around water, she said. Fleming remembered her uncle as a rock other family members could turn to in times of crisis. She said his death feels surreal, especially because he was so familiar with the ocean. "The puzzling question for me is how this could have happened," she said. "He was a waterman." The deaths also hit hard at St. John's Pleasant Valley Hospital in Camarillo, where the Isnec and Sieng worked. Isnec worked for St. John's for about 20 years and supervised its maintenance department. Sieng was a skilled maintenance worker hired in 2009, officials said. Both men were loyal, hardworking employees whom staff members loved, said Laurie Eberst, president and CEO of St. John's Hospitals. Employees gathered Monday to grieve for the two men at a memorial ceremony in the Camarillo hospital's healing garden, she said. Eberst remembered Isnec as a devoted family man with an upbeat attitude who was passionate about his work. Isnec was committed to making sure everything in the hospital ran perfectly, Eberst said. He was symbolized at the memorial service by his office chair, and people there noted it looked new because he was working around the hospital so much that he never sat in it. Sieng, known as "Ponch," was a fun-loving family man who would prepare baked goods to share with co-workers, Eberst said. Once a professional baker, his specialties included elaborately decorated cakes, she said. Both men were fishing aficionados, Eberst said. Isnec and his fishing buddies regularly tried the Santa Cruz Island area, she said. "It's a tragedy," she said. "Our prayers go out to their families."”

'March 15, 2012 [The Garden Isle]: “LIHU‘E — A boating accident over the weekend in waters off of the Channel Islands of California claimed the lives of at least three men, including 54-year-old Edgar Allen Isnec, a Kaua‘i High School class of 1975 graduate. “He was a Hawai‘i boy, died in the water,” Isnec’s friend Deborah Austin said. Isnec and three friends went fishing Saturday at about 10 a.m., according to his wife, Beth Isnec. A week prior, he had caught a big halibut near the Channel Islands and returned to the same spot. “He loved to fish more than anything else in the world,” his wife said. At around 11 p.m., worried that her husband had not yet returned, Beth Isnec called the Coast Guard to ask for help. The following day, the Coast Guard discovered the bodies of three men, including Edgar Isnec, floating on the ocean. The body of a fourth man was never recovered. Beth Isnec said the Coast Guard told her that a rogue wave apparently hit their new fishing boat and turned it over. “It was a freak accident,” she said, adding that the waters were otherwise relatively calm when the men went out. “(The Coast Guard) told me they were alive for a couple of hours trying to swim, but they probably succumbed to hypothermia and drowned,” said Beth Isnec, explaining the water temperature was about 50 degrees Fahrenheit, too cold to survive for a long period. Edgar Isnec was a man loved by many, his wife said. “Everywhere he went he exulted the aloha spirit,” Beth Isnec said. “The kids loved him, everybody called him uncle.” Austin is a nurse at St. John’s Pleasant Valley Hospital in Ventura, Calif., where Edgar Isnec worked as an engineer. Because Austin is originally from O‘ahu and worked for a couple of years at Kaua‘i Memorial Veterans Hospital on the Westside, she and Isnec sealed an instant friendship when they first met, she said. Edgar and Beth Isnec had been together for 20 years and tied the knot about four years ago. He has three children from a previous marriage and she has two children from a previous marriage, Beth Isnec said. Edgar Isnec’s parents, Carlos and Monica Isnec, died a few years ago. He still has three sisters and a brother on Kaua‘i. “We’re going to take him home and spread his ashes at Waimea Canyon,” said his wife, explaining that those were her husband’s wishes.”