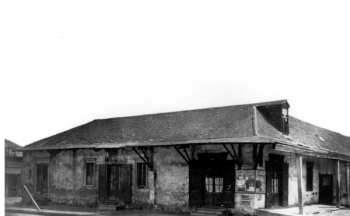 According to the 1880 census, Sing Chung (written Chung Sing) was doing business on Canon Perdido Street; he was thirty-five years old and unmarried. He listed his occupation as "merchant."

By 1885, at least six junks were working the islands out of Santa Barbara, including Jog-On and Acme. Many were owned and operated by Sing Chung, a prosperous merchant on East Canon Perdido Street in Santa Barbara. Additional junks came from other ports.

February 21, 1880 [SBWP]: “Sing Chung vs. H. H. More. The case came up for further hearing. It was a suit to recover goods held for non-payment of freight between Santa Rosa Island and the mainland. Testimony and argument concluded, and case taken under advisement by the Court.

April 27, 1885 [SBDI]: “A Chinese junk is lying in our harbor, the property of Sing Chung the Chinese merchant. She is from San Diego and we are credibly informed that the white fishermen made it very unpleasant for the Mongolian fishermen, and the junk in the future will ply the waters near Santa Cruz Island. The fish they catch is dried and forwarded to China.”

June 5, 1885 [SBDI]: “The Chinese merchants are experiencing quiet times in their branches of trade. The merchants during the past year, however, have shipped hundreds of dollars worth of abalone shells, to say nothing of the dried fish that has been shipped to San Francisco and thence forwarded to the ‘flowery kingdom.’ Sing Chung and Co. have a number of men constantly employed in hunting, fishing and gathering shells in and around the several islands that are within a few hours sail of Santa Barbara. They own their own boats, and in fact everything that pertains to the business in which they pursue. Their Chinese junks are commanded by Mongolians, who have been brought up on their own water, and can reef and furl with true American style…”

June 25, 1885 [SBDI]: “Some of our merchants are doing a ‘land office’ business in dispensing of their old dry goods boxes to Sing Chung, who owns and controls six Chinese fishing craft… They are to be used in shipping fish to China…”

July 3, 1885 [SBDI]: “The Chinese junk is moored alongside Stearn’s Wharf this morning discharging her cargo of fish, amounting to twenty tons. They are in large tanks covered with brine in the hold of the vessel, the variety is known as the red fish. They weigh from one to twenty pounds and are the fruit of two months’ work. The junk carries six hardy Chinese seamen, and is the property of Sing Chung.”

August 29, 1885 [SBDP]: “A new Santa Barbara industry is the drying of abalone meat for shipment to San Francisco and export to China where it is regarded as a delicacy by the natives. Sing Chung and Sing Hop, Chinese merchants engaged in the trade, have sent for exhibition several specimens of the dried meat, as well as a number of handsomely polished abalone shells.”

December 21, 1891 [LAT/SB]: “A Chinese junk anchored off the wharf broke loose from its moorings Saturday night and drifted seaward. There was no one aboard the junk. It was the property of Sing Chung & Co. of this city.”

December 22, 1891 [LAT/SB]: “The Chinese junk which broke from its moorings and drifted out into the channel Saturday night, went ashore down on Dixey Thompson’s ranch below Ventura.”