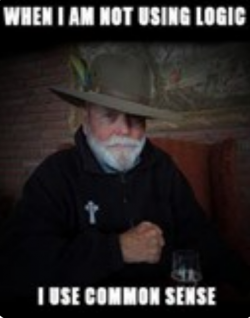 SIPLE, Randolph E. (1933-2016), was 16 years old in 1949 when his father, a contractor, built the Navy Road from Prisoners' Harbor to the naval facilities on the eastern Isthmus of Santa Cruz Island.

Siple said the construction crew also helped rehabilitate the old adobe at Prisoners' Harbor: “We rehabbed it with windows and doors and white washed it. That is the way we left it.“ (The adobe was torn down in 1964.)

November 14, 1949 [LAT]: “Navy basing radar on Santa Cruz Isle. Permanent installation will be used to track guided missiles. Santa Cruz Island, Nov. 13—Past and resent—and the future, too—are mixed on a 1,500-foot peak of this drowsing channel island that has changed but little since the days of Maximilian. The past is the sun-swerp terrain, the steeply rising cliffs ceaselessly battered by the sea, the bright hues of the mountains, the scraggled growth of old oak and cactus, a land untouched—almost. The present is in the road of machines, the shouts of men, the sound of hammer and saw and cement mixer. And the future? The alchemy of electronics, the moving dot on the radar scope, the flashing track of guided missiles scorching seaward from the mainland.

Vital for nation. For on Santa Cruz the Navy is building a permanent radar station, a vital aid to this nation in the international race for supremacy in "push-button" warfare. From the Guided Missile Test Center 26 miles away at Point Mugu near Oxnard the newest designs in this mysterious field will streak out over the Pacific on test flights to drop into the depths. Yet with this station, and others like it on nearby channel islands, the missiles will not be lost, for their course will be followed from beginning to end as they telemeter back all the intricate operational knowledge that engineers must know to push deep beyond the threshold of uninhabited, long-range flight.

Electronics Use. The Santa Cruz station is the first major installation planned to receive this information through the maize of modern-day electronics.

September 27-October 1, 2016 [Ventura County Star]: “Randolph Edward Siple, Ventura, CA. My Last Announcement: Randolph Edward Siple, born June 5, 1933 in Glendale, California left this world on September 20, 2016. It is with some regret that I tell you I have died, but with no regret that I have joined so many of my friends on the other side. Let me tell you a little about my life. Soon after my birth to a very liberal lady, I hit the decks a common sense conservative and a Renaissance man. (Such a person is restless in learning and studying and there is no end to it.) Because of a split family, I attended some thirteen elementary schools, two military schools, one junior high, and two high schools. No middle schools. I graduated from Stanford University in History and Political Science. Then ROTC sent me to Germany as a tank platoon leader. Once I was back stateside, I graduated from USC as a Doctor of Law. I practiced law in Los Angeles, Santa Cruz, and finally Ventura counties. I was both a prosecutor and a private attorney. I joined the Navy Reserve, as an officer in intelligence and retired from that service. At one time I led a law firm of eight lawyers and designed and built the office building known as Lincoln's Inn in Ventura. When I came to believe progressives pushed the law business into an extortion racket, I quit and started several companies, developed raw land, built homes, etc. In the process, we ended up with several ranches and a brewery (Smoke Mountain) and winery (Rincon Mountain).

Somewhere along the line, I collected some 30 cars and restored many of them. I made ship models, learned to play some 13 or so musical instruments, including the Scottish pipes. With all this, I founded and led the Swing band named "The Society Big Band". We played in most of the hotels in Ventura, Los Angeles and specially played aboard the Queen Mary and at Avalon for New Year's Eve. Once my small band played under the wing of the Spruce Goose in Long Beach. For over 16 years my family and I have opened our ranch, above the Pacific, to New Orleans Jass and BBQ on the first Sunday of every month. No charge. It is the West Coast Traditional Jass Club. No! Jass is correct if you know your history. I have written the following books:

They can be found at Amazon or Barnes and Noble.

The most important events have been my family. I have three sons, Shaun, Edward Darren, and Tanner, and one daughter, Heather. My wife, Susan, has been my best friend and life's partner. We have loved each other very much and still do.

Besides being in politics most of my life, the thing which I am very proud of is that I have had many business partners and they are all my friends. To do that, you must be honest, fair and always ready to help. Since this is my last opportunity to say so, I have concluded that every society is divided into three parts. One is left and dangerous, one is the middle and waffles back and forth, and one is to the right where all the common sense folks work and play. You know where I have been.

Personally, I would rather slip out the back door with a wave of my hand and a shout good-bye, but the family will want a day to remember. So be it. Keep a scotch and soda ready, I might come back!

A memorial service to celebrate the life of Randolph Siple will be held Sunday, October 23, 2016. Please visit www.TheRoosterCrows.net for details.”