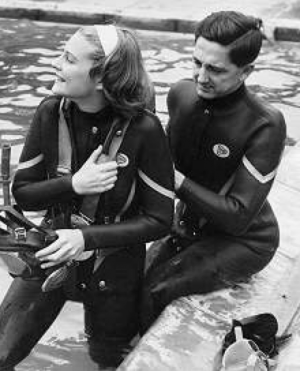 SMALL, Peter (1927-1962), one of two men drowned in an accident of the submersible Atlantis at Santa Catalina Island on December 3, 1962. Small was 35 years old and newly married. His 23-year-old wife committed suicide not long after his death. Chris Whittaker drowned in an attempt to rescue Small. He was 19 years old.

“LAST NOVEMBER, John Bennett dived to 1000ft - the deepest open-circuit scuba dive ever undertaken. This remarkable achievement, though appropriately heralded in diving circles, attracted comparatively little media attention. But it was a different story 40 years ago. Then, on 3 December, 1962, another Englishman became one of the first two divers to reach a depth of 1000-ft. in the open ocean. This scientific triumph, which was to end in tragedy, was attended by the worlds Press, the navies of Britain and the USA, and numerous top-ranking scientific establishments. One of the men was Selby-born Peter Small, 35, a freelance science journalist of national repute, with whom I shared an office. Small was co-founder of the British Sub-Aqua Club, founder-chairman of the Underwater Equipment Research Society and principal organizer of the 2nd World Congress of Underwater Activities. He was a visionary who had uncompromisingly campaigned for more inner space research. The other was a previously little-known 28-year-old Swiss mathematician, Hannes Keller. The historic but fateful mission was his brainchild. For though Keller survived the dive, Peter Small did not. Nor did a 19-year-old Lancastrian called Christopher Whittaker, who was one of two safety divers during the attempt. The events of that tragic day off Catalina Island in the Pacific had their roots in 1958, when the young Hannes Keller became interested in diving. He quickly learned about all the physiological limitations and their effects - including nitrogen narcosis and decompression sickness. Using his mathematical know-how, he came up with the theory that a diver should breathe a combination of gases different from those which make up ordinary air. Keller took his theory to Dr Albert Buehlmann, a specialist in lung function and blood circulation at the University of Zurich, who suggested which gases he should use. Breathing Buehlmanns mixture, which was kept secret, Keller was lowered 400-ft. to the bottom of Lake Zurich in a 40 gallon oil-drum and suffered no ill effects. Keller thereafter systematically fed 250,000 statistics into a computer and worked out the safety factors for dives down to 1000ft. In 1960 he successfully dived to 500-ft. in Lake Maggiore, and in 1961 he reached the record depth of 728-ft. and returned safely after 45 minutes. By then the US Navy was extremely interested in Kellers work and gave him a contract to continue his research. As a result, and in preparation for a 1000-ft, dive, he designed and built a diving chamber called the Atlantis, 7-ft. high and 4.5ft in diameter, with a bottom hatch through which divers could leave and re-enter.

Early in 1962, Keller met Peter Small. He knew of Kellers project and asked to join it. Keller tested him by taking him on a simulated dive to 1000-ft. in a decompression chamber, which he successfully completed. Peter was to write about the dive for a British national newspaper. That November, Keller and his team arrived in Los Angeles to carry out preliminary tests. Peter Small arrived with his 23-year-old wife Mary, daughter of aircraft designer F. G. Miles, whom he had married three months previously. Two local divers joined the party, American Richard Anderson and Christopher Whittaker, who was studying at UCLA. They were signed on as safety divers, their role to check the Atlantis in shallower depths if anything went wrong. In one test, two days before the 1000-ft. dive, Small and Keller descended to 300-ft. in the Atlantis, remained for an hour and swam outside the chamber checking the equipment. This was probably the first time that any diver had stayed at that depth for so long. Small later complained of muscle pain but seemed all right after spending 4.5 hours in a decompression chamber.

On the morning of 3 December, the expeditions two ships set out from Avalon, which is on Catalina Island. Observers included experts from the US Navy's experimental diving program and people from the Shell Oil Company, which supplied the support ship Eureka and the decompression chamber. Kellers surface crew, which included Dr Buehlmann, controlled the operation. The historic dive began with a six-minute stop at 16-ft. to check equipment. Then the descent began, with Eureka quickly paying out the cable. The two divers had water up to their knees, and kept the hatch partly closed to prevent them falling out. At 250-ft., Keller and Small stopped for two minutes to switch to the gas mixtures and the final descent began. The cable touched bottom at 1020-ft. and Keller was later to say that when they opened the hatch there was about 5-ft. of water between the hatch and the seabed. Keller dropped out feet first, his aim being to place a Swiss and a US flag on the bottom and return immediately. But as he left the chamber, the flag became entangled in the breathing tubes of his face mask and he couldn't see. It took him two minutes to untangle himself from the flags and get back in the chamber. The two men then tried to close the hatch. What happened then was related by Hannes Keller a few weeks later at the offices of Diver (then Triton) at a meeting that included BSAC Chairman Colin McLeod and Vice-President Oscar Gugen; Sgnt-Capt Stanley Miles, Director of the Royal Naval Medical School; Sgnt-Lt Tony Jarrett, RAF Institute of Aviation Medicine; Cdr R Harland, ex-Supt of Diving RN; Mary Small and myself. Keller explained that four tanks supplied mixtures to the Atlantis. Tank 1 had been intended to take the two from 250-1000-ft., then back to 500-ft.; Tank 2 from 500-300-ft., and Tank 3 from 300-130-ft. Tank 4 was a reserve. During the early stages of the dive, Keller noticed that Tank 1 was showing only 80 bar instead of 150. The two were using semi-closed-circuit breathing sets with 3 litre tanks, and their reserve at 1000ft would therefore be reduced to four minutes instead of 10 or 12. Their dilemma, therefore, was whether to continue the dive and keep refilling their tanks, or to abort. They decided to keep on refilling, but instead of staying at 1000-ft. for five minutes, as originally planned, to cut their bottom time to three. In Kellers opinion, this decision was one of two which probably caused Peter Smalls death. The second mistake was to exit to drop the flags on the ocean floor at 1020-ft. In the circumstances, this should never have been attempted. Keller said he was exhausted and dizzy when he climbed back into the chamber, and also felt some fear. In retrospect, he wondered if he should have promptly refilled the apparatus, but decided to close the hatch first instead. He tried to do this but a fin got caught in the hatch, so it wouldn't close properly. All he could then do was to open the air-pressure valves to blow the water out of the chamber to prevent them drowning while unconscious. He then opened his face-mask and took his mouthpiece away to breathe ordinary air so that he wouldn't die from lack of oxygen. Peter Small tried to help him and also removed his mouthpiece, but failed to refill his own apparatus and, apparently, remove his face mask. Within 30 seconds of re-entering the chamber, Keller lost consciousness and remained that way for half an hour, suffering from oxygen hallucinations. Smalls pulse rate was low and his breathing shallow. He lost consciousness for 90 minutes, after which he began to speak and appeared reasonably normal. However, he was exhausted and couldn't stand. He was given a drink and was suffering from heat, so Keller cut away his suit and underwear. He was in touch with Dr. Buehlmann and finally reported that everything seemed OK.

Decompression continued for six hours and Small began to sleep. He kept changing positions and was very uncomfortable and nervous. When the bell was lifted onto the pier and laid down, Keller changed Smalls position and noticed that he was not breathing. He failed to respond to mouth-to-mouth respiration. The chamber was opened and Small was rushed to the Navy's hospital ship, where he was pronounced dead on arrival. A post mortem was to follow, with a high-level inquiry in the USA. This concluded that, with the exception of a serious gas embolism, Peter Smalls condition was physically sound, with no evidence of cardiac diseases. The committee agreed with Dr Buehlmann's conclusion that Smalls circulation was seriously impaired through possible prolonged anoxia with loss of consciousness. He was therefore not able adequately to eliminate the nitrogen from his body, and so developed the symptoms of decompression illness. One conclusion was that the whole experiment was fraught with potential hazard, caused by the complexity of pressure groups: magazine commitments; public announcements; navy contracts; borrowed items, including ship and closed-circuit TV; timetables; weather factors; limited individual time and expectant creditors. Nevertheless, the committee concluded that the dive had produced a significant scientific achievement, if one that had saddened the worldwide diving fraternity.

Peter Smalls death was not, of course, the only tragedy. What must not be forgotten was the courage and heroism of his friend and fellow-diver Christopher Whittaker. Whittaker was one of the two safety divers who went to the aid of Peter and Hannes Keller when they were lying unconscious in the diving chamber. It was impossible to raise them to safety until the leak in the chamber, caused by the trapped fin, had been sealed. No one will know just how exhausted Chris Whittaker felt, or what his thoughts were, after the unsuccessful first dive to 200-ft. to close the hatch. But one thing we know is that, against advice and with an unselfish disregard for his own safety, he turned his back on those aboard the Eureka and plunged 200-ft. down again to the leaking bell. He was never seen again.

There was to be a deeply sad and distressing ending to this saga. The young and beautiful Mary Small had been married to Peter for only 12 weeks before his untimely death. She found life without him unbearable, and nine weeks later ended her life in a gas-filled room at their home, surrounded by photographs of her husband strewn on the floor.”