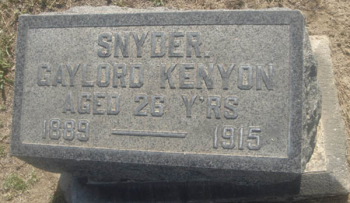 SNYDER, Gaylord Kenyon (1889-1915), Ohio-born Stanford University graduate of electrical engineering in 1913, and active member of the Cooper Ornithological Club from the time of his nomination by Virgil W. Owen in 1910 until his untimely death five years later. Snyder collected a set of bald eagle eggs on Santa Catalina Island on April 4, 1912 [WFVZ 80479].

“We have to record the sad news of the death of Gaylord K. Snyder, active member of the Cooper Ornithological Club, who passed away at his home in Los Angeles, August 28, 1915. Mr. Snyder was a young man of most pleasing personality, a frequent attendant at Southern Division meetings, where his presence will be greatly missed, and an occasional contributor to The Condor. In his untimely death the Club has sustained a distinct loss. [Condor 17:6 (236) November-December 1915.]

According to his death certificate, Snyder died at age 26 in Pasadena, California on August 28, 1915 from complications of an appendectomy. He is buried in Angelus Rosedale Cemetery, Los Angeles, CA.

Snyder's egg collection is located at the Western Foundation of Vertebrate Zoology.