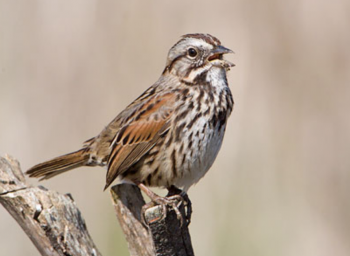 1927 Anacapa Island" “Melospiza melodia clementae. San Clemente Song Sparrow. Following the treatment by van Rossem (CONDOR, XXVI, November, 1924, p. 219) the Song Sparrows which we noted commonly in the dahlia thickets are referred to this race. [“Through the generosity of Mr. Silsby M. Spalding who placed at our disposal his splendid cruiser Padariva I the writer accompanied by H. W. Carriger, Dudley DeGroot and 0. W. Howard was enabled to spend the period from March 25 to April 5, 1927, inclusive, among the Channel Islands off the coast of southern California.”]
Pemberton, J. R. Additions to the known avifauna of the Santa Barbara Islands The Condor 30(2):144-148, March-April 1928

1897 San Clemente Island: “Melospiza fasciata clementae—San Clemente Song Sparrow—Common along the ravines and lower mesas near the coast, as well as scatteringly along the canons higher up. Its favorite haunts appeared to be the weed patches and low brush on the sides of the shallow ravines which cut the first mesa above the beach. Here their songs and call-notes, which were seemingly identical with those of the adjacent mainland race, M. f. heermanni, were continually heard. At the time of my first visit, nidification was in progress, and during the second visit many full-fledged juveniles were taken. Infortunately no nests were discovered. Seventeen adult specimens of M. f. clementae measure as lofflos: [measurements given]. Thirty-five specimens of the San Clemebnte Song Sparrow were secured...The party consisted of Joseph Grinnell, who had immediate charge of the expedition, and gave special attention to the ornithology and entomology of the islands; Horace Gaylord, who collected mammals; and Harry Gaylord and James Brittan [Britton] who devoted their time to archaeology. The party left San Pedro harbor May 11 in a large fishing schooner... [returning June 9, 1897]”
Grinnell, Joseph Report on the Birds recorded during a visit to the Islands of Santa Barbara, San Nicolas and San Clemente, in the Spring of 1897 Pasadena Academy of Sciences Publication No. 1, August, 1897 (26 pages).

1907 San Clemente Island: “Melospiza clementi. San Clemente Song Sparrow. Abundant resident. Common in the yards at Howlands, nesting in the scrub cacti and vines within a few yards of the hacienda. March 31, three nests were found in the corral near the stables; one contained four young one week old, the others having incomplete sets. These nests were built a few inches from the ground in the center of the cacti beds, which, being covered with a thick growth of vines, completely hid the nests. A large series of skins preserved.” [“Visits were made to Clemente in January, February, March, April and October, 1907.”]
Linton, C. B. Notes from San Clemente Island The Condor 10:82-86, March 1908

1897 Santa Barbara Island: “Melospiza fasciata graminea — Santa Barbara Song Sparrow. The most abundant bird of Santa Barbara Island. Numerous everywhere, especially on the bush-covered fields on the south-eastern portion of the mesa. Their song, notes and action were apparently identical with those of the mainland Song Sparrow. If any different, the song of the island bird is a little weaker and briefer. Full-grown juveniles were numerous, more so than the adults which were all apparently engaged in nest-building or raising a second brood. Mr. Horace Gaylors and myself found five sets of the eggs of this species. The nests are all of practically the same size and composiiton. A typical one is supported by the obliquely-growing twigs of a bush; it is lined and internally composed of fine yellow grasses, in marked contrast with the larger brown grasses and weed stems of which the nest is basically built. The measurements of this nest are: Inside—diameter, 2.30; depth, 1.30. Outside—diameter, 4.00; depth, 3.30. In detail the sets are as follows: [descriptions of 5 sets]. This series in color and markings is absolutely indistinguishable from a series of the eggs of M. f. heermanni taken in the vicinity of Pasadena. Thirty-one specimens of the Santa Barbara Song Sparrow were secured. Nineteen adults measure [measurements] ...The party consisted of Joseph Grinnell, who had immediate charge of the expedition, and gave special attention to the ornithology and entomology of the islands; Horace Gaylord, who collected mammals; and Harry Gaylord and James Brittan [Britton] who devoted their time to archaeology. The party left San Pedro harbor May 11 in a large fishing schooner... [returning June 9, 1897]”
Grinnell, Joseph The Islands of Santa Barbara, San Nicolas and San Clemente, in the Spring of 1897 Pasadena Academy of Sciences Publication No. 1, August, 1897 (26 pages).

1897 Santa Cruz Island: “With much interest I read Mr. Jos. Mailliard's article on the birds of Santa Cruz Island in the May-June number of the Bulletin, and finding his experience different from mine in some particulars, I submit a few notes taken principally on the west end of the island in May, 1897. I saw and collected in two or three different canons near the ocean specimens of the song sparrow (M. f. graminea). F... Following is a list of birds observed during my stay:- Santa Barbara Song Sparrow (Melospiza fasciata graminae);...” Beck, R.H. Additional Notes on the Birds of Santa Cruz Island, Cal., 1899

1898 Santa Cruz Island: “...Song Sparrows, recently identified as Melospiza faciata gramminea, were frequently heard around the vegetable garden at Iaaplaya (Main Ranch) and often seen. This garden was surrounded by a very thick trimmed hedge of cypress which was the abiding place of these birds. A singular feature in connection with this sparrow was the fact that although shot as soon as they appeared in this garden, there would be two or three more in a day or so, and yet none were found anywhere else in the vicinity or on the whole island, except on a small creek some seven or eight miles from Laplaya, where one or two were seen...”
Mailliard, Jos., Spring Notes on the Birds of Santa Cruz Island, Cal., April,1898 The Condor 1(1):41-45, April 1899

1907 Santa Cruz Island: “Melospiza graminea (?) . Santa Barbara Song Sparrow. Fairly common.” [“At 11:30 p. m., November 19, 1907, my father (H. Linton), Mr. George Willett, and myself left San Pedro harbor in a dilapidated fishing smack and in company with a crawfisherman, one “Cold-foot” Jorgensen. We arrived off the south end of Santa Cruz Island at 10:30 the following day during a stiff norwester. For various reasons we were unable to make camp until the 22nd. It may not be amiss to state here that twice during the blow we were nearly wrecked: once while at anchor in Potatoe Harbor, a broken anchor allowing the boat to drift within the breaker line and nearly onto the rocks. In this instance the timely arrival of Willett and H. Linton in a small boat, saved the day, and incidentally the fishing smack. At another time (the engine having broken down) we were blown nearly onto the rocks of Anacapa Island; but with father at the wheel and Willett and I on the “sheet” we managed to hold her off. I mention the foregoing, and the many sleepless nights spent on the rocky shores, “running” the surf several times each day (with attendant duckings), etc., merely as a warning to those who seem inclined to believe a field naturalist’s life “strewn with roses”. (Its ’ generally strewn with cacti!)”]
Linton, C. B. Notes from Santa Cruz Island] The Condor 10(3):124-129, May 1908