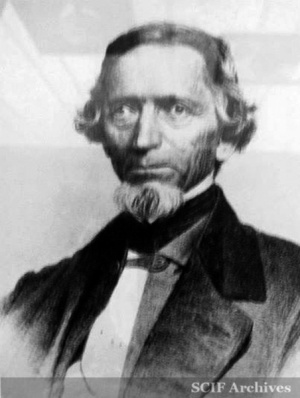 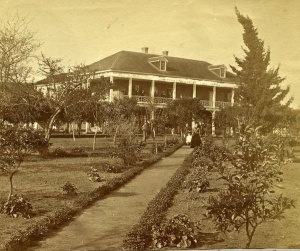 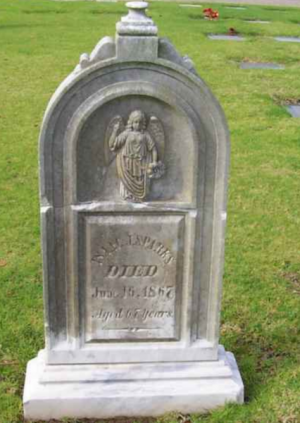 SPARKS, Isaac J. (1804-1867) was native of Bowdoin, Maine and otter hunter by profession, along with his friend, George Nidever. Sparks joined a fur trading expedition led by the famous mountain man, Jeddiah Smith in 1831. He arrived in Los Angeles in April 1832 with Ewing Young’s second expedition. Soon after his arrival he went to Santa Barbara, where he at one engaged in otter hunting. Sparks went on to become one of Santa Barbara's most distinguished citizens. He was one of the men responsible for removing the last of the Indians from San Nicolas Island for “missionization” in 1835.

In 1853, Sparks became Santa Barbara's third mayor, and in 1854 he built the first 2-story brick house in Santa Barbara on the southwest side of State Street between Gutierrez and Montecito streets which later became the Park Hotel. In 1865 he was one of the stockholders of the Santa Barbara Wharf Company, which built Santa Barbara's first wharf at the end of Chapala Street. This ill-fated venture was superseded by Stearn’s Wharf in 1872. In 1836 Sparks married María de los Remedios Josefa Antonio “Mary” Ayers [Eayres] (1813-1893), who had previously been married to Irishman, James W. Burke (1799-1877). Isaac and Maria Sparks had seven children. Isaac Sparks was also the godfather to George C. Nidever’s son, José Ramón Jacobo “Jake” (1849-1913). [Nidever: 107; W. H. Davis: 93, 158, 318].

Isaac Sparks died on June 16, 1867. He was buried in the old Montecito Street graveyard, and ten years later his remains were reinterred in the newly created Santa Barbara Cemetery.

Isaac Sparks left a wife and daughter in Saint Louis when he set out for California, where he started a second family:

THE SPARKS QUARTERLY, The official publication of the Sparks Family Association

1867: “A large procession set out from the 300 block of State Street in Santa Barbara on a June day in 1867. At its head, drawn by four horses, trundled a black-draped wagon bearing a coffin. In it lay Isaac Sparks. Behind the wagon walked the pastor. Behind him came the black-garbed family, community leaders, employees, and town folk.

The procession was probably the largest yet in Santa Barbara for a Protestant citizen. Isaac Sparks had lived in Santa Barbara for more than twenty-five years. Arriving in 1832 as one of the first Anglos to even visit Santa Barbara, Sparks hunted otter up and down the coast and among the offshore islands. He worked with cohorts George Nidever and Lewis Burton, under a Mexican government hunting license issued to ship captain William Goodwin Dana.

Early on, Sparks used his earnings from hunting proceeds to purchase 200 square varas of the land now known as Burton Mound, located near what we now know as West Beach. On this site, he opened the first mercantile store and post office in Santa Barbara. His store was successful; he built a large brick house in the block at the northwest corner of State and Montecito Streets, bounded by Chapala and Gutierrez. The home sat in the middle of a five-acre lot surrounded by gardens.

Isaac Sparks led a colorful life. In his late thirties, he came close to death, losing his right eye to a grizzly bear he encountered in the Santa Barbara foothills in 1837. In his resolute manner, he recovered and married the young woman who nursed him back to health. In order to marry in the Mexican-governed town, Sparks became a naturalized Mexican citizen. His bride, Mary Eayres, was the daughter of a ship’s captain who had been left in Santa Barbara to be raised by the De la Guerra family. Governor Manuel Micheltorena presented Sparks with the twenty-two thousand-acre Huasna Rancho in San Luis Obispo County as a wedding gift.

The Sparkses continued to prosper, raising three daughters and weathering the 1846 military insurrection staged by John C. Fremont to win the state from Mexico. Sparks was conscripted as a rifleman by Fremont, and $900 worth of supplies were requisitioned from his store.

As Santa Barbara transitioned into an American territory, Sparks’ hunting cohort Lewis T. Burton, was elected the first President of the Common Council in August of 1850. However, Burton resigned the position after three months. The title of the position was changed to mayor and in quick succession Francisco de la Guerra (the first Santa Barbaran to hold the title of mayor) and then Joaquin Carrillo served. In 1852, Francisco de la Guerra served a second term. In May of 1853, Isaac Sparks was elected the fourth mayor of Santa Barbara, serving only six months.

In 1867, Sparks joined with Lewis Burton, and George Nidever, his old hunting partners, and the physician and businessman Dr. Samuel Beviers Brinkerhoff to form the La Compania del Muelle de Santa Barbara, or the Santa Barbara Wharf Company. Construction on the Chapala Street Wharf was started, but Isaac died before the wharf was completed and opened for business in 1868.

In a town of fewer than two thousand souls, of whom more than 75 percent were of Indian or Spanish descent, Sparks was well-known. If Santa Barbara can be said to have had a frontier period, Sparks, Nidever, and Burton embodied it. And yet, this era flowed seamlessly into a period of settlement and stability, due in large part to the efforts these early Anglo hunters made at building a community.

So it was likely that people from all walks of life joined the procession behind Isaac Sparks’ coffin. Though there was no newspaper in town when Sparks died, processions of the day were documented by later editions. When Pablo de la Guerra died seven years later in 1874, the Santa Barbara Times described the procession:

"The remains, encased in a metallic casket, upon which was a silver tablet giving the name, time of birth, and death of the deceased, were placed in an open wagon and covered with the American flag. The following is an outline of the funeral cortege: First, Lobero’s band in uniform; second, the priests in their robes, the sisters of charity, and the orphans; third, the hearse and the pall-bearers, who wore white sashes trimmed with crape [sic]; fourth, the members of the medical and legal professions; fifth, the family and relatives of the deceased; sixth, the members of the press; and lastly, friends and acquaintances of the deceased."

When it was Isaac’s time, they did not have far to go. From the front steps of the Sparks’ home, they proceeded out to Montecito Street. Here they turned west to look down a long, lightly developed stretch of dirt track out towards the steep eastern face of the Mesa. As they neared the Mesa, they passed the Stevens and McNally Brickyard where Santa Barbara clay was quarried for roof tiles and adobe bricks. Just past this, they turned in at the little plot of land wedged against the side of the Mesa that the town of Santa Barbara had set aside in 1853 for Protestant burials.

It was a sad destination for such an influential Santa Barbaran. Clearly, Isaac Sparks had a permanent place in the town’s history. Other civic leaders in the party must have felt acutely the dissonance between Isaac Sparks’ influence in life and his resting place in death. Among those attending were the likes of Lewis Burton,, Samuel Brinkerhoff, Charles Huse, John Peck Stearns, Augustin Janssens, Charles Fernald, the Reverend Joseph Johnson, Dr. James B. Shaw, Sr., and George Nidever.

What they saw was a graveyard unfenced, unkempt, and roughly used. Most of the burials had been of strangers removed from ships to be buried ashore, or of the poor. They were granted a wooden cross or a crudely carved slab. A select few locals with the means had erected sandstone or marble monuments. Nine years later, the Santa Barbara Index would report,

“The bones of the old soldiers and sailors buried in the first Protestant graveyard are not cared for. The excavation for clay for the brickyard is encroaching upon it, and the bones of the brave dead lie scattered around and are ground up by passing wheels.”

People experienced a kind of horrified shock at the scene described. How could a community treat its dead this way?

But in those days, the shock was quite a new thing, and quite American. The European burial custom for centuries had been what the French called concession temporaires. This burial method, still widely used in Europe and prevalent today in some New Orleans cemeteries, allotted a grave site to an individual for a minimum period of time. In New Orleans the duration is “a year and a day.” After that time, another burial can occur in the same grave or crypt. In Europe, the decayed remains were moved to ossuaries or charnel houses (now they are cremated), and in New Orleans, the old coffin was removed, the remains pushed back or aside in the crypt, and the new coffin placed inside.

The disheveled little town cemetery on the outskirts of Santa Barbara was a necessary stage in Santa Barbara’s burial of the dead without which the next stage may not have occurred. The stages were carved out in American culture in sharp contrast, each distinct and practical, each one necessary for the times. These stages, from European settlers’ earliest days on the continent, progressed over time and over the continent, culminating in the California cemeteries of today. [David Petry. The Best Last Place. A History of the Santa Barbara Cemetery. (2006)]

May 7, 1870 [SBT]: Married in Santa Barbara at the residence of the bride’s mother, by the Rev. Father James Villa, Mr. Azra Porter to Miss Rosa Sparks, all of Santa Barbara.”

June 2, 1882 [SBDP]: “In the matter of the estate of Isaac J. Sparks, deceased. The court filed its findings on the petition of Sally Harkness, filed February 21, 1881, and the answer of Flora Harloe thereto, and signed and filed its decree in conformity therewith.”

July 30, 1908 [SFC]: “Noted old skipper drops final anchor. Captain Marcus Harloe, California Pioneer, dies at son’s home, aged 75. Captain Marcus Harloe, a pioneer of 1850 and one of the best known veteran master mariners on the Pacific Coast, died yesterday at the home of his son, John Harloe, at 2372 Broadway, aged 75 years. In 1850, before he was 21, Captain Harloe brought the ship Wild Pigeon from New York around the horn to San Francisco. In the early seventies he went into the service of the famous old Pacific Mail Steamship Company, and later he went to the Pacific Coast Steamship Company, when it was owned by Goodall, Nelson & Perkins. Under Governor Perkins in the sixties, Captain Harloe was harbor master of the Port of San Francisco. He was elected captain of the first battery of national guard artillery in the state and belonged to the first volunteer fire copany in this city. He was a charter member of Excelsior Lodge of the Masons and a Knight Templar. About fifteen years ago he retired from the sea to live with his family on his 14,000 acre ranch in San Luis Obispo county, and served in the state assembly. Captain Harloe leaves a wife [Flora Sparks] and five children — Marcus, George, Archie and John, and a daughter, Cushie.”

August 2, 1908 [SBMP]: “Captain Harlow [sic] dead. Navigator well-known here passes away at Pismo Beach. The death of Captain Marcus Harlow, who was well known in this city, occurred recently at the age of 75 years, at Pismo Beach. For many years Captain Harlow was commander of one of the Pacific Steamship Company’s steamers, which ran between San Francisco and San Diego and called at this port. He was also for a number of years port collector of San Francisco. He married Miss Flora Sparks, the daughter of Isaac Sparks of this city and the sister of Rosa Porter and Mrs. Ramona Trussell of this city. His widow and four children survive him.”