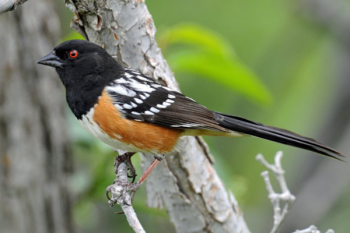 1897 San Clemente Island: “Pipilo clemente—San Clemente Towhee. Not uncommon along the larger ravines and canons, wherever there is a thick growth of wild cherry bushes; but on account of their silence and secretive habits they were not easy to locate. A Twohee might be heard scratching among the dead leaves in a thicket, but he would not be easy to drive out, and even if he did finally vacate, it would only be to drive into the next bush on the opposite side of the would-be collector. However, when the males sang, or rather repeated their "(tow)hee", they generally mounted to the highest twig of a bush, and were there quite conspicuous. They usually appeared thus in the early morning and evening. The "catbird" call, which is so characteristic of P. m. megalonyx, seems to be unknown to this bird. Six specimens, the type series, were taken during the first visit, and ten during the last. The latter are typical in every respect. Especially noticeable, when compared with P. M. megalonyx, is the long bill, which averages in the ten specimens: culmen, .58; gonys, .42. Although the birds taken were evidently breeding, no nests were found nor juveniles observed...The party consisted of Joseph Grinnell, who had immediate charge of the expedition, and gave special attention to the ornithology and entomology of the islands; Horace Gaylord, who collected mammals; and Harry Gaylord and James Brittan [Britton] who devoted their time to archaeology. The party left San Pedro harbor May 11 in a large fishing schooner... [returning June 9, 1897]”
Grinnell, Joseph Report on the Birds recorded during a visit to the Islands of Santa Barbara, San Nicolas and San Clemente, in the Spring of 1897 Pasadena Academy of Sciences Publication No. 1, August, 1897 (26 pages).

1897 San Clemente Island: “... Mr. Jos Grinnell exhibited a series of Pipilo, showing the distinguishing characteristics between his newly-named P. clementae (from the island of San Clemente), and the mainland form P. maculatus megalonyx. ” [The Osprey 2(1):14 September 1897]

1907 San Clemente Island: “Pipilo clementae. San Clemente Towhee. None were seen within eight miles of the northwest coast, but they were very common near Mosquito Harbor. The “catbird” call of P. m. megalonyx of the mainland, said to be “unknown to this bird’, I often heard; in fact it was the common note heard at this season. P. clementae is a shy and silent bird during breeding season, which probably accounts for the statements of observers during that period, limiting his vocal attainments to the “towhee” call. During October the towhees were observed shaking the overripe cherries from the twigs of the low hanging branches, then flying to the ground and securing the well-earned delicacies. This curious operation I often watched them perform.” [“Visits were made to Clemente in January, February, March, April and October, 1907.”]
Linton, C. B. Notes from San Clemente Island The Condor 10:82-86, March 1908

1905-1906 Santa Catalina Island: “Pipilo maculatus clementae. San Clemente Towhee. Very abundant especially in the washes. Nine specimens, six males and three females were secured. Compared with specimens of Pipilo macuatus megalonyx in my collection, they have larger bills and are grayer dorsally, this latter condition being especially prominent in the females. ” [“These notes are the result of two brief sojourns on Santa Catalina Island in the month of April, eight days being spent in 1905, and five in 1906. Fortunately both trips were made after wet seasons; the hills were carpeted with grass, flowers and insects were abundant.”]
Richardson, Charles H., Jr. Spring Notes from Santa Catalina Island The Condor 10(2):65-68, March 1908

1897 Santa Cruz Island: “With much interest I read Mr. Jos. Mailliard's article on the birds of Santa Cruz Island in the May-June number of the Bulletin, and finding his experience different from mine in some particulars, I submit a few notes taken principally on the west end of the island in May, 1897... I found the towhee (Pipilo maculatus oregonus) not very wild and secured without much trouble a dozen or so. Among those taken was a partial albino having many white feathers scattered among the black on the head and neck...”
Beck, R.H. Additional Notes on the Birds of Santa Cruz Island, Cal., 1899

1898 Santa Cruz Island: “...I was especially desirous of obtaining a number of specimens of the Towhee (Pipilo maculatus) of the island, but they were too wild and wary. Only one pair were taken... Following is a list of birds observed during my stay:- Oregon Towhee (Pipilo maculatus oregonus);...”
Mailliard, Jos., Spring Notes on the Birds of Santa Cruz Island, Cal., April,1898 The Condor 1(1):41-45, April 1899

1907 Santa Cruz Island: “Pipilo clementae (?). San Clemente Towhee. Fairly common. Some specimens secured had not lost the brownish edgings to the feathers of the back, giving them a peculiar appearance.” [“At 11:30 p. m., November 19, 1907, my father (H. Linton), Mr. George Willett, and myself left San Pedro harbor in a dilapidated fishing smack and in company with a crawfisherman, one “Cold-foot” Jorgensen. We arrived off the south end of Santa Cruz Island at 10:30 the following day during a stiff norwester. For various reasons we were unable to make camp until the 22nd. It may not be amiss to state here that twice during the blow we were nearly wrecked: once while at anchor in Potatoe Harbor, a broken anchor allowing the boat to drift within the breaker line and nearly onto the rocks. In this instance the timely arrival of Willett and H. Linton in a small boat, saved the day, and incidentally the fishing smack. At another time (the engine having broken down) we were blown nearly onto the rocks of Anacapa Island; but with father at the wheel and Willett and I on the “sheet” we managed to hold her off. I mention the foregoing, and the many sleepless nights spent on the rocky shores, “running” the surf several times each day (with attendant duckings), etc., merely as a warning to those who seem inclined to believe a field naturalist’s life “strewn with roses”. (Its ’ generally strewn with cacti!)”]
Linton, C. B. Notes from Santa Cruz Island] The Condor 10(3):124-129, May 1908