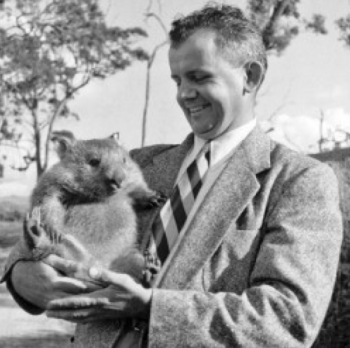 In 1958, Stager visited Clipperton Island with the Los Angeles County Museum. He was so appalled by the depredations by the island’s pigs upon the brown booby and masked booby colonies, he personally shot all 58 pigs, thus allowing the colonies to rebound.

Stager's Channel Islands specimens are in:

Los Angeles County Museum Survey [unattributed]: "The Archaeological section of the Museum Survey consisted of Mr. Arthur Woodward, Miss Marion Hollenback and Miss Barbara Loomis. Mr. Woodward, however, remained only for the first three days. They reached Santa Rosa Island via the Fish & Game Commission boat Yellowtail on November 25th, 1941 after a few days delay in getting away from the mainland due to high winds. Already on the island were Mr. and Mrs. Kenneth Stager who were studying mammals, and Mr. Bill Fletcher, Mr. Jack Couffer, and Mr. Victor Case, who were concerned with fossil elephants. Mr. and Mrs. Willett of the Zoological division arrived on the 29th via the Scoffield and Mr. Woodward and the Stagers left.

June 2, 2009 [LAT]: “Kenneth E. Stager emeritus senior curator of ornithology and mammalogy at the Natural History Museum of Los Angeles County, has died. He was 94. Stager, a West Los Angeles resident, died of age-related causes May 13 at Ronald Reagan UCLA Medical Center, said his wife, Erika. "To me, it's like the end of an era in that he really personified the period during which the major collections of birds and mammals were amassed through expeditionary collecting," said Kimball Garrett, the museum's ornithology collections manager.

Stager obituary: The obituary of Kenneth E. Stager in Wednesday's Section A said he organized or participated in numerous expeditions, including to the Cocos Islands in the Indian Ocean. Stager, who served as a curator at the Natural History Museum of Los Angeles County, made an expedition to Cocos Island in the Pacific Ocean off Costa Rica. — A World War II Army veteran whose association with the Natural History Museum began in the late 1930s as a UCLA zoology student worker, Stager was appointed curator of ornithology and mammalogy in 1946. He was promoted to senior curator of ornithology in 1961 and also served as curator in charge of the habitats division and as coordinator of the life sciences field programs. Stager's greatest and most enduring contribution to the museum and to the fields of ornithology and mammalogy, according to the museum, "was the substantial acceleration of expeditionary collecting work under his curatorial supervision." He organized or participated in numerous major, privately sponsored expeditions, including trips to Barranca del Cobre and Islas Tres Marias, in Mexico; Queensland, Australia; Brazil; India; east Africa; Clipperton Island and the Galapagos Islands in the Pacific; and the Cocos Islands in the Indian Ocean. During his 1958 trip to Clipperton Island, 800 miles southwest of Acapulco, Stager succeeded in eliminating the feral pigs that had devastated the tiny atoll and collected a specimen of the South American cuckoo bird Coccyzus melacoryphus, which was the first to be taken in North America. The specimens Stager collected during his heyday from the 1940s through the '70s have been invaluable to researchers, Garrett said. "Many of the collections he made are in areas that have seen large-scale deforestation or other habitat change, and therefore, he's left us with a really irreplaceable record of how things used to be," Garrett said. Stager retired from the Natural History Museum in 1976 but remained active in the fields of ornithology and mammalogy and was instrumental in securing an endowment -- the William Cheney Jr. Memorial Fund -- in support of the museum's mammalogy programs. Garrett recalled Stager coming in two days a week in the late '80s and '90s to help out with the collections. "And selfishly for us, that was a time to listen to his stories," Garrett said. "The stories were always wonderful. He knew people that are just sort of historical figures to us. When somebody lives to be 94, I think it's a very important role they play: They link us to our past." Stager continued to work in the museum's collections until suffering a stroke in 2001 that limited his mobility.

Born Jan. 28, 1915, in Uniontown, Pa., Stager spent his childhood in Glenwood Springs, Colo., Gardena and Los Angeles, where he graduated from Manual Arts High School. He received a bachelor's degree in zoology from UCLA in 1940 and was hired as a full-time assistant under curator George Willett in late 1941. During World War II, Stager was a U.S. Army liaison officer with the Chinese Army in Burma, commanding officer of Headquarters Company of the Northern Combat Area Command, and commanding officer of a heavy weapons company. Stager, who received a Bronze Star for his service as part of the infantry unit known as Merrill's Marauders, also was awarded the United States of America Typhus Commission Medal for "meritorious service in the investigation and control of scrub typhus fever in Assam and Burma" in 1945 while in charge of the ornithology and mammal laboratory of the U.S.A. Typhus Commission Burma-India Field Party. While in Asia, he collected 139 bird skins, including a prized silver pheasant that was part of the museum's recent "Treasures from the Vault" exhibit. Discharged from the Army as a captain in 1946, Stager received a master's degree in zoology from USC in 1953 and a doctorate from USC in 1962. Over the years, Stager was elected a Fellow of the American Ornithologists Union and an honorary life member of the Cooper Ornithological Society; he also served a term as president of the Southern California Academy of Sciences.

In addition to his wife, whom he met on an expedition in Brazil and married in 1948, Stager is survived by his son, John. No funeral service will be held.”