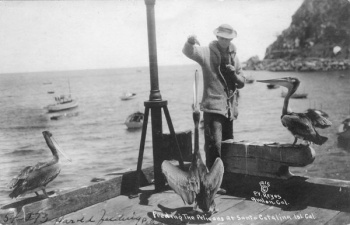 J. H. Stamford became the first mayor of Avalon when it was incorporated as a city in 1913.

August 5, 1925 [TI/Avalon]: “Janey May Stamford returned Sunday after visiting her grandparents, Mr. and Mrs. Berlotti for the past two weeks... Mrs. Jane Stamford has returned to her Avalon home after a six months visit to the mainland. While in Los Angeles Mrs. Stamford went to Claremont where her son, J. H. Stamford, has his home. Mr. Stamford built an apartment on his home for his mother.”

May 15, 1941 [TI/Avalon]: “J. H. Stamford, Avalon's first mayor, passes. Funeral services were held Tuesday at Pomona, California, for Joseph H. Stamford, aged 74, who passed away Sunday at his home, 420 East Foothill Boulevard, Claremont. Mr. Stamford had been ill for several months. He is survived by his wife, Beth, and by two sons, Joseph B. of Los Angeles and Harold Stamford of Avalon. A number of Avalonites attended the services and many beautiful floral tributes were sent by island friends and sympathizers. Born in 1867, at Cambridge, England, Joseph H. Stamford arrived in Canada at the age of sixteen, with his parents. Three years later the family left for Wisconsin, and in 1887 they located at San Pedro, California. Before coming to Avalon, in 1897, Mr. Stamford was in the employ of the Southern Pacific railroad at San Pedro, Mojave and Cameron, as telegrapher and and ticket agent. Despite the fact that he had lost his left arm while in Canada, Mr. Stamford was credited with being one of the fastest telegraphers on the Pacific coast. After the purchase of the Stamford Hotel property in Avalon, Mr. Stamford remained here until 1920, when he retired to his Claremont home. He was the founder of the Catalina Hardware Company, now operated by his son, Mr. Harold Stamford. For many years Joseph H. Stamford was active in local civic progress. He was unanimously elected Avalon's first mayor, when the city was incorporated in April 1913. A number of the city ordinances still in effect were signed by him as chairman of the Board of Trustees. Although many of his friends wished him to continue his service on the Board of Trustees for a second term, he declined the offer. Later he accepted the office as City Recorder (City Judge) and held that office for a period of two years. In the days of the Banning Brothers ownership of the island, the Hotel Stamford and the Stamford family home was typical of the early California hospitality. Both Mr. and Mrs. Stamford were staunch supporters of the Avalon Community Church and much of the progress of the church of the early days was due to the untiring efforts of the Stamfords and their loyal group of friends. Until his recent illness Mr Stamford visited Avalon once or twice each year. He was particularly fond of attending the Easter Sunrise Services at Buena Vista Park [Mt. Ada].....”

September 8, 1955 [TI/Avalon]: “Mrs. Elizabeth Stamford passed away Saturday, Sept. 3rd in the McCabe Rest Home in Claremont, where she has been a patient for the past year. Funeral services were hold yesterday afternoon in the Claremont Memorial Chapel. Mrs. Stamford was the step mother of Harold Stamford and has long been associated with Catalina's early history. She was a staunch supporter of the Congregational Church, of which her brother, Charles Williams, was minister serving in Avalon from 1899 to 1906. Brother and sister worked together for the community and were instrumental in the building of the present church and the parsonage. She was organist for the church and gave piano lessons to Island children. Mrs. Stamford's mother, Mary Williams, was the founder of the local Women's Club, formally known as the Mary Williams Club. She was also an affiliated member of the Claremont Church, an ex-regent of the Claremont Chapter of the D.A.R., a life member of the Women's Club of Claremont and an honorary member of the Santa Catalina Woman's Club. In lieu of flowers kindly send donations to the Catalina Museum Memory Fund.”