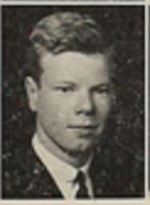 STANTON, Carey Quillian (1923-1987), Los Angeles-born (February 20, 1923) second son of Edwin Locksley Stanton and Evelyn Carey Stanton. His first name is is mother's maiden name. In 1937 when Stanton was 14, his father, Edwin, purchased the western 9/10ths of Santa Cruz Island from the Caire family.

As a young man, Carey spent all of his school vacations and as much time as possible on his parents 55,000 acre ranch in the sea. In 1944 his older brother, Edwin Stanton Jr. was killed in Normandy. Carey Stanton was graduated from Stanford University School of Medicine in pathology and internal medicine, and he practiced medicine for about two years.

In 1957 with his father’s failing health, Carey Stanton left medical practice and moved to Santa Cruz Island to live and work on the island in the cattle ranching business. He never married. A man of worldly scholarly interests, Carey enjoyed meeting scientists and students who visited the University of California Santa Cruz Island Reserve which he had made possible in the mid 1960s.

An avid historian by avocation, a collector by nature, and a “stickler for detail” by his father’s description, Carey Stanton developed an unequaled passion for collecting Santa Cruz Island material: books, maps, photographs, art and artifacts. In 1985 he established the Santa Cruz Island Foundation as an organization devoted to the preservation of the cultural histories of the California Channel Islands.

On December 8, 1987 at the age of 64, Carey Stanton died at his island home. His land passed to The Nature Conservancy and his personal estate passed to the Santa Cruz Island Foundation.

May 6, 1978 [Herald Journal]: “Best land buy since Alaska. Santa Cruz Island sold to Nature Conservancy. Dr. Carey Stanton is selling his beautiful, unspoiled island off the Southern California coast for only $50 as acre. The buyer, the Nature Conservancy, says the purchase of Santa Cruz Island for $2.5 million is 'perhaps the best land buy since the United States bought Alaska.' Frank Boren, of the Nature Conservancy, said the group will maintain the island as a wilderness. Stanton said he could have sold the 82-square-mile island for millions more to developers, but the Stanton family has been rejecting lucrative offers for 42 years. Stanton owns about 90 percent of the island, 75 miles northwest of Los Angeles. 'My father bought this island in 1936 and loved it to the day he died,' said Stanton. 'I love the island, too, and I think the best thing that could happen to Santa Cruz Island would be to leave it the way it is. At all cost.' Stanton gave up his medical practice 20 years ago, when his father died, and took over the family cattle ranch. The cattle are raised on the island and sold on the mainland. 'I moved out here in the 1950s because my father had no other living children and I felt I had a family responsibility to protect the island against developers,' Stanton said. Stanton, 55, is a bachelor and has no direct heirs. 'When I realized I wasn't immortal, I began to worry about what might happen to the island after I died.' So he arranged to sell the island to the Nature Conservancy, a national conservation group, which has until July 5 to come up with the money or secure pledges. A number of rare birds, animals and plants exist on the island, including at least 75 endangered species. At night wild razorback hogs roam, and Stanton never goes for a drive without a high-powered rifle mounted on the dashboard of his jeep. The island's rugged topography is virtually unchanged from the way it appeared to the Spanish explorers who set foot on Santa Cruz four centuries ago. The beaches are littered with driftwood and abalone shells, and the lush island valley is fragrant with sweet grass and wild licorice plants. Stanton will continue managing the affairs of the thriving cattle ranch from his island compound after the sale. 'I couldn't live full time in the city,' Stanton said. 'I never could get used to all that concrete. And the air. Well, once you breathe the air of Santa Cruz Island, there's nothing to compare.' Stanton's ranch is a world of its own. A small housekeeping staff and a dozen laborers live in cabins. Mail and groceries are flown in to a small landing strip. Underground springs provide fresh water. A diesel generator provides the power. He says he doesn't feel isolated by his offshore lifestyle. 'I don't own a boat, plane or helicopter, but there's nothing that prevents me from chartering a plane if, say, I want to attend a party in Santa Barbara or a concert in Los Angeles. And I do that quite often.'”

December 14, 1987 [News Journal]: “Dr. Carey Stanton, who set aside his medical practice to dedicate his life to preserving Santa Cruz Island, the largest of the five Channel Islands off the coast, has died at the age of 64. Stanton, who inherited 90 percent of the 61,000-acre island from his father in 1957, died there Tuesday. Under a 1978 agreement, Stanton left the property to the Nature Conservancy, a private, non-profit organization based in Arlington, Va., which will maintain it as a private natural and historic preserve.”