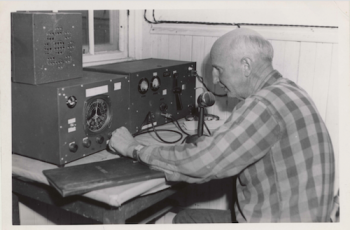 STANTON, Edwin “Ed” Locksley (1893-1963), San Diego-born business man who purchased Santa Cruz Island in 1937 for $750,000. As a young man, Stanton and his family moved to Los Angeles in 1899. The youngest of three sons born to Chappel Q. and Ida Dobson Stanton, Ed was graduated from Los Angeles High School in 1911, and from the University of California at Berkeley in 1915 where he was a highly accomplished track star and Olympic contender. He was also a member of the Delta Kappa Epsilon fraternity. In 1916 at the age of 23, he married Evelyn Carey. Son Edwin Jr. was born in 1918; son Carey was born in 1923. During World War I, Stanton served in France as lst Lieutenant in the Field Artillery Division. After the war, he developed a variety of business interests in manufacturing, ranching and in the oil business.

April 10, 1937 Edwin Stanton bought the western 9/10th of Santa Cruz Island (five parcels) from the Caire family. (The eastern end of the island, divided into two parcels, was retained by Caire family descendants.) For the first few years of his island ownership, Stanton tried to revive the island’s sheep ranch, only to change to the cattle business, the mainstay of island operations until 1987. At the time of his purchase, the winery begun during the Caire era was all but stopped. Stanton removed the remaining grape stock in the Central Valley to make room for additional pasturage.

In July of 1941, Ed Stanton offered the island for sale to the United States Army through Headquarters of the Ninth Corps Area. Stanton received the following response:

“The Commanding General directs me to inform you that in case future needs make such a site desirable, appropriate consideration will be given to your property.”

In 1944, Edwin Jr. was killed in France during World War II, leaving son Carey to inherit ranch management from his father in 1957. In 1958, five years before Ed Stanton’s death, he passed the management of the Santa Cruz Island Company to his only surviving son, Carey Stanton. In April of 1962, Edwin Stanton was offered $15,000,000 in cash for his island holdings, an offer which he declined. On June 5, 1963, Edwin Stanton died of a heart attack at his Georgian-style home at 435 Windsor in Los Angeles. His funeral was held in Saint James Episcopal Church on Wilshire Blvd., Los Angeles.

August 22, 1905 [LAT]: “Mrs. C. Q. Stanton and her family have returned from an Alaskan tour. The two eldest sons stopped at Berkeley where they have entered college.”

February 10, 1915 [LAT]: “Berkeley briefs. Eddie Stanton has taken up basketball and boxing as preliminary work. He considers the boxing especially valuable, as it speeds up foot action, which should help in starting.”

April 22, 1937 [SBNP]: “Island sold. A one-man kingdom. By deeds which went on file in Santa Barbara shortly before noon today, Edwin L. Stanton, owner of the Stanton Axel Works of Los Angeles, became sole owner of 54,750 acres of Santa Cruz Island, 23 miles long and six miles wide. At a noon luncheon Stanton announced himself as a new rancher resident of Santa Barbara, declared his intention of maintaining the island property as a great, typical, old-fashioned California ranch and got down to the business of stocking his little empire with more horses, cattle and sheep. Stanton, who is 44 and a native of California, refused to discuss the price he paid for his tremendous new properties. He did not deny the report that the deal totaled a million. The deed recorded here did not carry any stamps for two reasons: First Santa Barbara’s recording office did not have enough stamps in stock to cover the deal; second Stanton, who wishes to avoid money publicity, had legal advice that the stamps might be applied after recording. The new owner of Santa Cruz Island left the county recorder’s office just before noon today owning all but 7500 acres of the great island and all properties of whatever kind, or connected with the island. These properties include the Santa Cruz Island schooner, Santa Cruz, which Stanton immediately will equip with new engines and renovate for better and faster service. Stanton discussed locations for an airport on the island and indicated he probably soon would provide for quick transportation between his Los Angeles business and his island domain. Nicholas Liatas, Santa Barbara realtor, who has been agent for the Santa Cruz Island Company for seven years, with the sale of the island today completed not only the biggest realty deal of his own record, but what is believed to be the biggest single realty deal in both acreage and money involved in the city of Santa Barbara. Associated with him was Hugh M. Kice, of Coldwell, Cornwall and Banker, realtors of Los Angeles and San Francisco. Verne E. Robinson of Salisbury, Robinson and Himrod, Los Angeles attorneys, was present at the negotiations today as Mr. Stanton’s private council…”

April 23, 1937 [SBNP]: “A deed by which Edwin L. Stanton, Los Angeles automobile part manufacturer, purchased 54,750 of the 62,250 acres in Santa Cruz Island was filed in the Santa Barbara County Recorder’s office yesterday. Stanton, in Santa Barbara to close the big deal and fresh from the latest of several horseback inspections of the tremendous property he had acquired, refused to discuss his reported million dollar payment for the property. He was, however, anxious for Santa Barbara to know that he is sentimental enough to maintain the island as an old-fashioned California cattle ranch, and that he wanted to be a good cattleman citizen of Santa Barbara county and neighbor to Santa Barbara city. Santa Cruz Island was given by Mexican grant in 1839, just short of a century ago. It came into the hands of the Justinian Caire family of San Francisco in 1869, more than half a century ago. For a quarter of a century rumors of its sale for everything from a prison site to a club for the extremely wealthy have been circulated in Santa Barbara. Now that the long expected sale has come, Mr. Stanton can be welcomed as the good neighbor he wishes to become and congratulated on further development of another great ranch about its borders…”

April 27, 1937 [OT]: “A dream which was held before the public as an island park for its pleasure and recreation has been withdrawn. State and Federal Governments having refused to pay $750,000 for Santa Cruz Island, the place has been sold by the heirs of Justinian Caire to Edwin L. Stanton, Los Angeles Capitalist. It is to be developed as a private estate and apparently is abandoned that plan which the War Department was said to have favored, of erecting fortifications on the place… Heirs of Justinian Caire still retain 7500 acres on the east end…”

October 11, 1937 [SBNP]: “Island trip enjoyed by businessmen… Accompanying the U.S. Naval Reserve on one of its Sunday cruises aboard the patrol boat YP33, a party of Semana Nautica committeemen, headed by Maj. W. F. Kurtz, their chairman, cruised for 12 hours and visited points of interest on Santa Cruz, including Prisoners’ Harbor, the approach to the Santa Cruz ranch, recently purchased by the Stanton interests of Los Angeles. Here they saw, in addition to the nautical beauties of the island, one of the famous old brick wine warehouses built in 1887; the original adobe ranch house with its picturesque iron adornments and lightening rods. Also they saw a domesticated wild boar, sampled grapes from the famous vineyards, fished off the dock, ate Chef Ed Gourley’s appetizing mananda…”

October 13, 1937 [SBNP]: “First of 10,000 head of sheep shipped to island. Fifty-one hundred head of sheep, half of a shipment of more than 10,000 head were being taken to the Santa Cruz Island ranch of E. L. Stanton yesterday aboard the schooner Santa Cruz and the larger Vaquero. The sheep, which made up 25 carloads, were purchased in Arizona and brought here by rail, being corralled temporarily on property at Punta Gorda Street and the railroad tracks...”

May 9, 1943 [SBNP]: “Sheep on Santa Cruz Island are steadily losing weight. No there is nothing wrong with them, they are the friskiest, sleekest bunch of sheep the island has ever boasted, and nimble, too, for even the old rams can vault a high fence in a way that would be the envy of the best pole vaulter that ever was. The fact is in connection with the loss of weight this is shearing season on the island, and with wool prices at an all time high, Edwin L. Stanton, island owner, promises to clean up a pretty penny. But the island is short-handed, having been hard hit by the manpower famine, so that shearing is not proceeding with the speed of other seasons. The wool, though, was said to be of an extra fine grade, a long-staple variety, as cotton growers would say, that having an added softness is much in demand in these war days… Stanton, the owner, also has built a broad motor road the full length of the island to facilitate getting about and to open up intriguing views. Only persons having business on the island are allowed there, under war regulations, so that sheep shearers go and come under Coast Guard say so, it was indicated.”