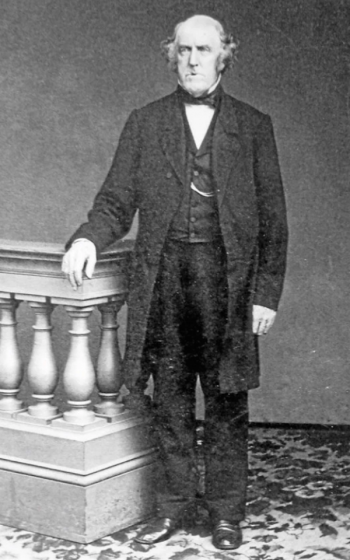 STEARNS, Abel (1798-1871), Massachusetts-born businessman who came to California 1829 via Mexico, where he had lived for three years and had become a naturalized citizen. In 1832 Stearns moved to Los Angeles and opened a very successful mercantile store. His empire grew, and in 1841 at San Gabriel Mission this ‘Yankee Don’, married Arcadia Bandini, daughter of the wealthy Don Juan Bandini. Stearns was 43 and Arcadia was 14. She came with a large dowry of land, and Stearns enlarged it to eventually include Rancho Los Alamitos, and other Alta California holdings totaling 300 square miles. Stearns clipper ship, Arcadia, made a run from the Atlantic states to San Pedro and Santa Barbara on May 31, 1855, with a large load of desirable goods. In June, she sailed for China. The Stearns had no children. Abel Stearn died in San Francisco in 1871. Three years later his widow married Colonel Robert Symington Baker, co-founder of Santa Monica.

June 14, 1858 [SFH]: “Notice to rancheros and stock dealers. John C. Jones vs. Alpheus B. Thompson, in the District Court of the 3rd Judicial District, State of California, Monterey County. The undersigned, receiver in the above case, hereby gives notice that, on and after the 13th day of July, 1858, he will receive proposals for and sell at private sale, so many of the horses, sheep, and cattle, upon the Island of Santa Rosa, in Santa Barbara County, or some of one of those classes, as may be deemed most advantageous, as will be sufficient to bring the sum of $7370.80 and interest at the rate of ten percent per annum, from August 26, 1857. The undersigned will consider proposals for purchases, to the above amount, of either horses, cattle or sheep, or of two or all of said classes, according to convenience of purchasers and benefit of the parties interested owning said stock. The proposals to be either personal, or addressed to the undersigned at Los Angeles. Abel Stearns, Receiver. Los Angeles, June 10, 1858.”

January 25, 1863 [HL/SG]: “Abel Sterns, Esq. Dear Sir, …We have made an offer for Santa Rosa [Island] of $15,000 for the Jones interest and Robinson sends up a dispatch for the east per Senator so we shall soon know whether they accept it or not…”