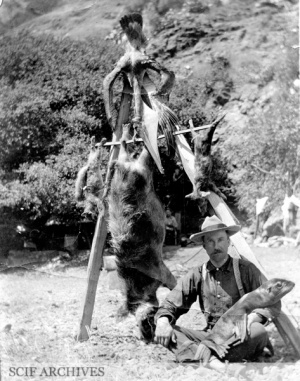 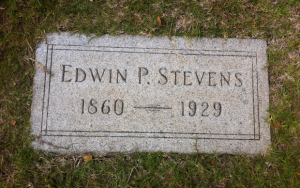 STEVENS, Edwin [Edward] P. (1860-1929) was born in Maine To Moses and Sarah Stevens. In 1897 he married his wife, Addie “Jessie” Stevens (1864-1932), and sometime after the turn of the century they moved from Kern to Santa Barbara. They adopted a baby boy left on their doorstep in Santa Barbara on the northeast corner of Figueroa and Santa Barbara streets across from the Santa Barbara Court House. They named him Urwin Stevens, and he became a Santa Barbara boat captain, seaman and fisherman.

July 26, 1892 [LAT/SB]: “The Ruby returned Saturday morning with a cargo of abalones from Santa Barbara Island. Captain Stevens verifies the statements recently published in the Examiner concerning the large number of the feline tribe which live upon this island and which so closely resemble the ordinary domestic cat.”

August 12, 1892 [LAT/SB]: “George Tibbets was arrested yesterday and taken before Justice Crane and charges with stealing a gun, the property of Captain Stevens of the schooner Ruby.”

September 25, 1892 [LAT/SB]: “The wreck of the Goldenhorn has been disposed of to Whitelaw of San Francisco, and it is supposed that a tug with all the modern wrecking appliances is now at work. The schooner Ruby came in yesterday with a load from the wreck yesterday afternoon, consisting of three anchors, a lot of ropes and sails. Some arrangement will doubtless be made between Messrs. Clark and Stevens and Captain Dunn of the Goldenhorn, and the stuff be disposed of to their mutual advantage.”

October 11, 1892 [LAT/SB]: “Messrs. Stevens and Larco have returned from San Francisco, and report having disposed of all the wreckage from the Goldenhorn at a fair price. They also report that there is an excellent show of Captain Dunn getting a ship there for Liverpool.”

December 10, 1892 [LAT/SB]: “The owners of the schooner Ruby received a telephone message Thursday night from San Pedro announcing the wreck of the schooner on San Clemente Island. No particulars were given, further than that the boat was a total loss. The schooner was a small, two-masted vessel, and was owned by Thomas Clark and E. P. Stevens of this city. The Ruby had gone to San Clemente Island after a cargo of shells, and it is supposed that she ran against a rock. There were three men aboard: Clarence Libbey in command; E. P. Stevens, one of the owners, and a seaman. No one was hurt. The schooner was valued at $1500 and was not insured.”

December 18, 1892 [LAT/SB]: “Mr. Stevens, upon arriving at San Pedro from San Clemente, after his own vessel, the Ruby, was wrecked, chartered the schooner San Mateo of that place, and brought his load of 300 sacks of shells, arriving here Friday evening. The San Mateo is a boat schooner rigged about the same size as the Ruby. Messrs. Stevens and Clark have purchased the vessel, and sent Captain Libbey and young Nidever down to San Pedro where the transfer of ownership will be made. They will bring the vessel back, and it will be run in the island trade by the new owners.”

December 22, 1892 [LAT/SB]: “Captain Ed Stevens, with the schooner San Mateo, returned from San Pedro Monday. His next trip will be to San Nicolas Island for shells. He is trying to make a contract to catch red fish in quantities. For the present, the San Mateo will ply between the islands and this city.”

May 20, 1894 [LAT/SB]: “Captain Ed Stevens of the sloop San Mateo related a tale of a lonely fisherman, known here only as ’Fatty,’ whom he discovered on Flea Island, a rock a little to the west of San Miguel Island. ‘Fatty’ was one of the Ord party, who left here on a sealing expedition in the Big Loafer, and was left on Flea Island, while the rest of the party came back here. They intended to return for him immediately, but were detained here by the charge of larceny of the Big Loafer, and ‘Fatty’ had to suffer all sorts of hardships, which Captain Stevens tells in a thrilling manner.”

May 24, 1894 [SBDI]: “The schooner San Mateo is at San Miguel Island. The return of Captain Ed Stevens with more harrowing tales of the sea, is awaited with pleasure.”

June 23, 1908 [SBI]: “Captain Vasquez this morning left in the Gussie M for the islands with Captain W. G. Waters, who will go to San Miguel, and a party of campers who will spend two weeks on Santa Cruz. They are Ed Stevens and Mr. and Mrs. Ben Stafford.”

July 18, 1910 [SBI]: “Captain Vasquez returned form Santa Cruz Island this morning. No traces had been found of the body of Miss Isabel Pierce, who was drowned about ten days ago in Cueva Valdez. Captain Short with the launch Charm, A. M. Pierce, the father of the girl, Ed Stevens, Eugene Whitcomb, Heath Conant and a force of men have thoroughly patrolled every foot of the shore. They have used about 50 pounds of dynamite, but all in vain...”

July 19, 1910 [SBI]: “A. M. Pierce returned last evening in the launch Charm from Santa Cruz Island after an unsuccessful search for the body of his daughter, Isabel Pierce, who was drowned ten days ago in Cueva Valdez. Every effort has been made since the accident to find the body, but the search has proved fruitless and Mr. Pierce has almost given up hope. The depth of water and the constant current, coupled with the heavy kelp at that place, were all against the searching party. Dynamite was used extensively at and near the scene of the accident and around the rock, where the girl was last seen, but all were in vain. Assisting Mr. Pierce in the search were Captain Henry Short, Ed Stevens, John Warnell, Eugene Whitcomb, Frederick Conant and Raymond Short. A sharp lookout will be maintained for the next week. A large party of Los Angeles people are camping about two miles from the place, and the Japanese fishermen are out that way at least every other day. Captain Short will make another trip to the islands the last of this week.”

August 29, 1913 [SBMP]: “Samuel C. Pinkham and E. P. Stevens returned yesterday with Captain Ira Eaton on the Gussie M from Pelican Bay, where they have been camping for ten days, enjoying the opportunity to view the marine gardens and explore the island forest, caves and canyons.”

August 25, 1929 [SBMP]: “Edward [sic] P. Stevens, 67, a pioneer of Santa Barbara, died last night at his home in Summerland following an illness of three years. Mr. Stevens came to Santa Barbara 46 years ago and was engaged in contracting and road building and supervised the paving of several streets in this city. He suffered a stroke of apoplexy three years ago and had been confined to his home lately. He moved to Summerland about 10 years ago. Mr. Stevens is survived by his widow, Addie J. Stevens, one son, F. Urvin, and three brothers, Charles, of El Paso, Texas; Moses, of New Mexico; and Forrest, of Calis, Maine. Funeral arrangements, in charge of Gagnier Funeral Home, are pending.”

October 9, 1932 [SBMP]: “Mrs. Addie Stevens, Old Resident Dies. Addie Stevens, widow of the late Edward P. Stevens, Santa Barbara and Summerland contractor, died yesterday morning at the home of her niece, Mrs. R. Eugene Dukich, 3018 Lomita Rd., at the age of 73 years. She was a native of Cutler, Maine, and had lived in Santa Barbara for the last 30 years. Mrs. Stevens is survived by a son, Hugh [sic] F. Stevens of Summerland; two nieves, Mrs. Dukich and Mrs. Mable Beardsley of Los Angeles; and three brothers, all of whom are sea captains: Emery Davis of Portland, Maine, Ernest Davis of Cutler, Maine, and H. U. Davis of New York. Funeral services will be held tomorrow afternoon at 2 o'clock in the Gagnier & Ryce Mortuary. Dr. Robert Norris McLean, pastor of the First Presbyterian church officiating. Internment will be in the family plot in Santa Barbara cemetery.”