Difference between revisions of "STEWART, Brent" 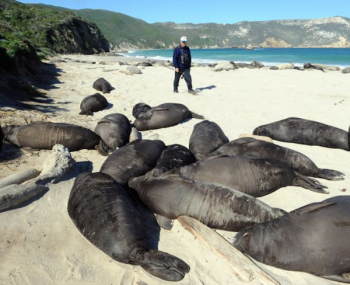 Brent Stewart is the Senior Research Scientist at Hubbs-SeaWorld Research Institute. Stewart joined the Hubbs-SeaWorld Research Institute as a field biologist in 1977 and has since conducted studies of a variety of marine mammals, sea birds, sea turtles, and sharks. In the 1970s and 80s, he pioneered the use of radio and satellite telemetry, a tool that he has used to study population biology, foraging and physiological ecology, and animal behavior in places as disparate as Greenland, the Bering Sea, the Yangtze River, the Ross Sea, and the Channel Islands of California. His Channel Islands work spans more than four decades of research, much of it on San Nicolas and San Miguel Islands. Stewart is also a Fellow of the famed Explorers Club (est. 1904).

Stewart has served as a Science and Diplomacy Fellow of the American Association for the Advancement of Science at the U.S. Department of State, and as Scientific Consultant to the U.S. Marine Mammal Commission on Bilateral and Multilateral Treaties.

Brent Stewart is member #15 of the All Eight Club of the Santa Cruz Island Foundation.