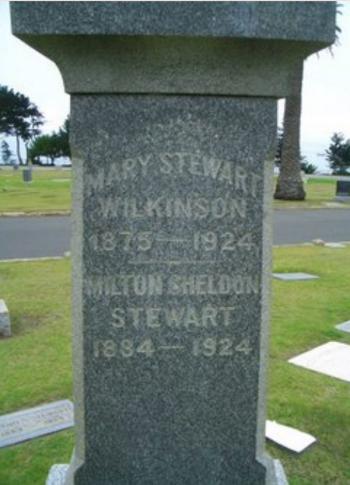 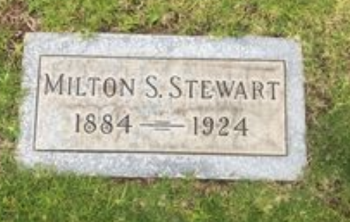 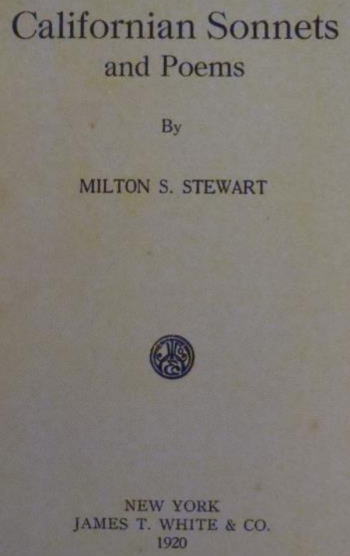 STEWART, Milton Sheldon (1884-1924), mining engineer who, for more than 30 years, enjoyed camping on the Channel Islands. Stewart drowned on July 22, 1924 when tragedy struck three members of a very large camping party staying at Cueva Valdez, Santa Cruz Island. The party included the Meigs family of Carpinteria, artist Ed Borein and his wife, and a large group of Santa Barbara friends who for many years enjoyed summer camp outings at Cueva Valdez on Santa Cruz Island. On July 22, eight days into their 1924 summer stay, three members of the party, Milton Stewart, his sister Mary Stewart Wilkinson, and Dr. Hal Bishop, drowned in a skiff accident in heavy wind and seas off Arch Rock. Arch Rock is located to the east of Cueva Valdez and to the west of Lady’s Harbor on the north shore of Santa Cruz Island.

July 16, 1895 [SBMP]: “The Restless returned from Santa Cruz Island yesterday with a party of thirteen campers. They have been at Quava [Cueva] Valdez for the past ten days. Included were Miss Rosamond, Peveril and Martin Meigs, Fred Poett, Misses Lorena and Mary Stewart, Mrs. Stewart, Robert and Milton Stewart, Walter Wilkinson, Mr. Devenes, Miss Dayton and Russell Brown. Duncan McDuffie, who went over Monday with seventeen campers, came back on the Restless, will return to the island tomorrow with twelve more of the same party. The Restless was becalmed about five miles out on her way over Monday, but she caught a stiff breeze at 3 o’clock and reached the island shortly after 6 o’clock.”

July 17, 1895 [SBMP]: “The Restless returned from Santa Cruz Island yesterday with a party of thirteen who were camping for the past ten days at Quava [Cueva]. The party consisted of Peveril Meigs, Martin Meigs, Fred Poett, Mrs. Stewart, Misses Lorena and Mary Stewart, Robert and Milton Stewart, Miss Dayton, Walter Wilkinson, Mr. Devenes, and Russell Brown. Duncan McDuffie, who went over Monday with seventeen campers, came back on the Restless, will return to the island tomorrow with twelve more of the same party. The Restless was becalmed about five miles out on her way over Monday, but Mr. McDuffie states that she caught a stiff breeze at three o’clock and reached the island shortly after six.”

March 31, 1917 [SBMP]: “A party of jolly adventurers will leave this morning for Anacapa Island to spend a week, providing the weather is permits. In case of unpleasant weather, the trip will be postponed until tomorrow or Monday morning. Miss Mae Crystal and Miss Mary Anderson are arranging the trip, being the two young ladies who were lost on Santa Cruz Island for several days last year. Owing to the size of Anacapa Island, however, they fear no such calamity this time. Others in the party are Mrs. Boardman, chaperone, Miss Gladys Waldon, Miss Maude Huse, Alonzo Forbush and Milton Stewart. Transportation will be provided by Captain Bay Webster on the powerboat Anacapa. The young people will return in about a week.”

July 24, 1924 [SBMP]: “Mrs. Walter F. Wilkinson, 49, of Chicago; Milton Stewart, 2028 Anacapa Street, her brother; and Dr. Harold Bishop of Alhambra, members of a party of 20 vacationists at Santa Cruz Island, were drowned when a small sailboat in which they were riding capsized off Arch Rock near Valdez Tuesday morning. Mr. Wilkinson, the only surviving member of the boating party, was rescued from the pounding surf at the base of an inaccessible cliff in a state of collapse by Peveril Meigs, Jr. and his 16-year-old son, Stewart Meigs, 40 minutes after the accident. News of the tragedy did not reach the city until late yesterday as no boat could be secured on the island to bring the report to the mainland. The body of Mrs. Wilkinson was recovered from the surf near the spot where her husband was rescued, but all efforts at resuscitation were futile. Mr. Wilkinson was in an exhausted condition when assistance reached him, but was able to point out the body of his wife floating nearby to his rescuers before he lapsed into unconsciousness. Mr. and Mrs. Wilkinson, Mr. Stewart, and Dr. Bishop left Valdez Harbor at 10 o’clock Tuesday morning to take photographs of the nearby cliffs, not realizing the force of the wind and swells. Little concern was felt for the members of the party until the tiny craft rounded a promontory to the west [east], when Peveril Meigs, Jr., a brother-in-law of Mrs. Wilkinson, noticed that the boat was having trouble in weathering the heavy seas. Accompanied by his son, Stewart Meigs, Mr. Meigs ran to the promontory to signal them to return to the shelter of the harbor. When he arrived at the top of the cliffs, he was just in time to see the small craft capsize as it was caught by a strong gust of wind, throwing the occupants into the water at a distance of approximately 100 yards from the cliffs. Mr. Meigs then ran to the nearest boat landing and secured a small skiff which, with the assistance of his son, he succeeded in launching through the heavy surf. But it was more than 40 minutes before they reached the site of the accident. The Search then turned to the rugged shoreline and the seething water in hopes that some member of the party might still be alive clinging to the wreckage of the boat. A faint cry from the cliff finally directed their attention to Mr. Wilkinson who was found clinging to a projecting rock in an exhausted condition. Within a few minutes he would have fallen back into the surf to meet the same fate as his companions, according to Mr. Meigs. After a battle with the surf the two rescuers succeeded in assisting Mr. Wilkinson into the boat. Even in his exhaustion is first thought was for his wife and he directed the two boatmen to the spot where her body was floating near the cliffs. But assistance came too late. All efforts at resuscitation were fruitless. All day and all night Tuesday Mr. Wilkinson was in a state of semi-delirium, talked incoherently, and was unable to give a clear account of the accident until yesterday afternoon. He is now under the care of a physician at the home of Mrs. Stewart, and is considered to be in a critical condition. A continuous search for the bodies of Milton Stewart and Dr. Bishop has been made since the accident, but without result. The heavy sea has made it impossible to launch a boat to patrol the water, and the only measures taken thus far were to place a lookout on the cliffs, according to Mr. Meigs. The isolated location of the camp caused considerable delay in bringing Mr. Wilkinson and the body of his wife to Santa Barbara, Mr. Meigs stated. No boats seaworthy enough to cross the channel were in Valdez Harbor at the time of the accident. The yacht Petrel, owned by Fred Lewis of Pomona, was finally found yesterday in a cove several miles from the scene of the accident, and Mr. Lewis placed it at the disposal of the party and assisted in their relief. The party of 20 landed at Valdez Harbor last Tuesday on an outing to the island. For several years it has been their custom to spend several days during the summer camping on the islands. Mr. and Mrs. Wilkinson have lived at La Grange, Illinois, a suburb of Chicago, for many years, and have visited in Santa Barbara each summer. Mr. Wilkinson gave up his business a short time ago and came to California to make his home. Mrs. Wilkinson and Mr. Stewart are the children of Mrs. Ida Stewart of 2023 Anacapa Street, and are sister and brother of Mrs. Peveril Meigs, Jr. Mrs. Wilkinson is survived by her husband and two children, Miss Maude and Walter Wilkinson, Jr. Captain Ira Eaton left Santa Barbara at midnight last night for Valdez Harbor to bring the remaining group of vacationist to Santa Barbara. Among those in the party are Mrs. Charles Cronise, the Misses Margaret and Dorothy Cronise, Mr. and Mrs. Edward Borein, Mr. and Mrs. H. E. West, Miss Helen Stewart, Loren Meigs, Jean Christie, Margaret Webb, Rosamond Eddy, William Eddy and Edith Bond. Mr. Stewart in 1920 published a volume entitled California in Sonnets and Poems, and write the lyrics for the light opera The Rocky Road which recently was completed here. An inquest over the body of Mrs. Wilkinson will be held at 9 o’clock this morning at the L. E. Gagnier funeral church. Funeral services, which will be strictly private, will be held at 4 o’clock this afternoon in the Santa Barbara cemetery, and interment will be in the family lot beside the body of her father. The family has requested that flowers be omitted.”

July 26, 1924 [SBMP]: “Peveril Meigs, Jr., his 16-year-old son Stewart, and Walter Bishop reached Lady’s Harbor, Santa Cruz Island, yesterday afternoon to search for the bodies of Dr. Harold Bishop of Alhambra, and Milton Stewart of Santa Barbara, with Mrs. Walter E. Wilkinson victims of a sailboat accident Tuesday morning off Arch Rock. Dr. Bishop was the brother of Walter Bishop, one of the searching party. The party is provisioned for a stay of ten days or longer. It was transported to the island by Captain Bob Ord of the Roncador. Upon leaving Lady’s Harbor Captain Ord headed toward San Miguel Island for cargo. He will return for the searchers in five days, it was stated. Mr. Meigs stated, before his departure, he had small hopes of recovering the bodies until they are washed ashore. Walter E. Wilkinson, husband of one of the victims, was yesterday reported to be steadily recovering from the effects of his battle with the waves. Mr. Wilkinson was the only member of the sailboat party to escape with his life.”