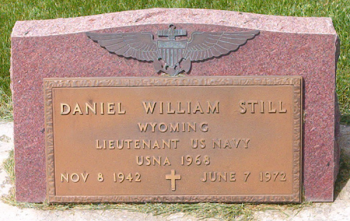 STILL, Daniel W. (1942-1972) [SS#520-44-7393], Wyoming-born Lieutenant and Navy pilot flying out of Point Mugu Naval Air Station, who was killed on June 7, 1972 when the jet he was piloting crashed into Santa Cruz Island near Picacho del Diablo, the island’s highest peak. At the time of the crash, the plane, a Lockheed QT 33 jet, was on a training mission testing an experimental system of test piloting by radio control. The plane disintegrated upon impact. Lieutenant Still was 29 years old.

June 10, 1972 [SBNP]: “Point Mugu. The body of a Navy pilot was recovered from the wreckage of his jet aircraft in a desolate valley of Santa Cruz Island yesterday. The Navy and Coast Guard had been searching since Wednesday for Lt. Daniel W. Still, 29, of Camarillo. His QT-33 jet was seen going down during a routine training operation Wednesday afternoon. The cause of the crash, in a hilly section of the island’s main valley, was unknown.”

June 11, 1972 [Billings Gazette]: “Point Mugu. A Navy search party found the wreckage of a jet aircraft and the body of its pilot Friday in a desolate valley of Santa Cruz Island. Lt. Daniel W. Still, 29, of Camarillo had been missing since Wednesday when his QT33 Navy jet was seen going down during a routine training operation. The cause of the crash in a hilly section of the island's main valley was unknown. Still was a 1968 graduate of the U.S. Naval Academy and won his pilot's wings in March 1970. His home was Cheyenne, Wyoming. He is survived by his widow and 16-month-old son.”