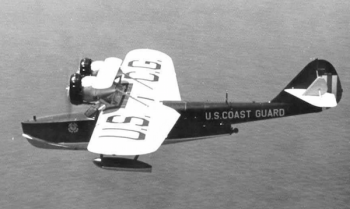 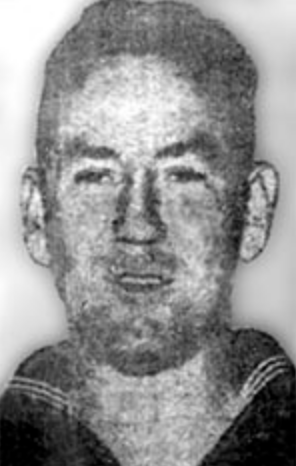 STONEROCK, Leonard L. (1905-1941), U.S. Coast Guard pilot from Englevale, Kansas who was killed when his plane clipped one of the Farallon Islands in heavy fog while on patrol. Stonerock was 36 years old. Killed with him were John C. Gill, radioman, and Fleet D. Hancock, mechanic.

Stonerock is noted on the U.S. Coast Guard Aviation Memorial cenotaph at the Wings of Faith Memorial Chapel in Elizabeth City, Pasquotank County, North Carolina. The memorial is dedicated to the Air Crews that did not return.

Tragedy at the Farallones:

It was August 5, 1941. The war in Europe had been raging for two years. Here in the United States, President Franklin D. Roosevelt, was enjoying a cruise off New England in the presidential yacht the Potomac. The Secretary of State, Cordell Hull, was concerned by Japanese intentions toward Thailand and the Southwest Pacific region. And in sports, the New York Yankees were playing the Washington Nationals in Washington, D.C.

That morning at the Coast Guard Air Station San Francisco, V126, a Douglas RD-4 Dolphin was being readied for what had become another routine patrol off the coast. Pilot , Leonard L. Stonerock, 33 [?], Radioman John C. Gill, 31, and Mechanic Fleet D. Hancock, 40, had been making the same patrol three times a weeks for quite some time.

And, that morning, as on many mornings before, the yellow winged plane was to takeoff and head for the Farallon Islands west of the Golden Gate. The Farallon Islands are actually three islands jutting above the surface of the sea. The Southeast Farallon group is the largest and best known. Located 26 miles southwest of the Golden Gate Bridge, it consists of about 120 acres and is the only island capable of marginally supporting humans. The Middle Farallon, 3 miles northwest, is nothing more than a large rock. Four miles northwest from there is the North Farallon group made up of seven steep and rugged rocks.

At 9 a.m., the crew of three boarded the RD-4, powered up and headed skyward. Once airborne, Stonerock headed the plane west only to be greeted by the typical offshore summer fog that San Francisco is famous for. As part of the patrol, radioman Gill was to call the station every 15 minutes to check in. At 10 a.m. they made a routine call and everything was normal. At 10:15, the crew failed to check in.

A search was initiated with Coast Guard, Army and Navy ships and planes scouring the area. The wives of all three hurried to the station to await word of their husbands’ fate. Search efforts were hampered by a low ceiling and poor visibility of less than one mile. At 3 p.m. a Coast Guard plane spotted charred wreckage of the missing plane 500 yards north of Southeast Farallon Island.

When Coast Guard cutters arrived on the scene they found the body of Gill. They also recovered burned sections of the wings as well as charts and the radio log of the V126. The search continued for the other two and the main fuselage until dark.

The next day the search continued however, the fog had worsened. Twice, Coast Guard aircraft were sent out to search but had to return because the visibility had decreased to 100 to 150 feet in the area. At times the fog was right down to water level making search by air in the area impossible. Crews from two cutters used grappling hooks in the waters of the crash site in an effort to recover more wreckage or the main fuselage. A few additional pieces of wreckage rose to the surface, but the bodies of the two missing aviators were nowhere to be found. It was believe that they were trapped in the main fuselage. Although at one point it was believe to have been spotted, whether it drifted away, or sank was never determined.

Initial investigation concluded that the probable cause of the crash was that the plane, while flying low to avoid the fog, struck a rock pinnacle on the southeast Farallon causing the aircraft to burst into flames.

A few weeks later the body of Gill was laid to rest in Arlington National Cemetery.

August 6, 1941 [Santa Cruz Sentinel]: “Three Coast Guardsmen Die in Crash. San Francisco, Aug. 5.—Three Coastguardsmen lost their lives today when their amphibian plane, skimming close to the Pacific Ocean on patrol duty, apparently struck a jutting rock and exploded. Charred bits of wreckage were picked up near the jagged rocks of the Farallon islands, 25 miles off San Francisco, by the naval minesweeps sent in search of the plane when it failed to make its regular radio reports. The plane was positively identified from a wing fragment. The three men were Leonard L. Stonerock, 33, pilot; Fleet D. Hancock, 40, mechanic, and John C. Gill, 31, radioman. All were first class petty officers. Gill's body, the only one recovered, showed signs of burns. ”