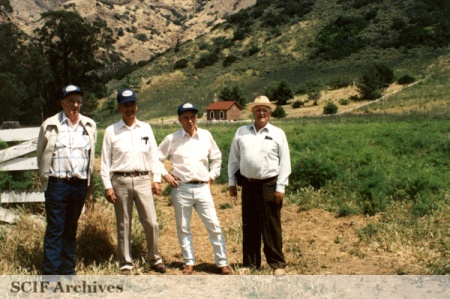 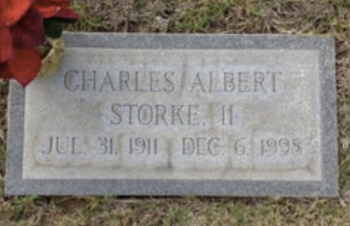 STORKE, Charles Albert II (1911-1998), an eighth generation Santa Barbaran — the great grandson of T. Wallace More. His great-uncle, A. P. More owned Santa Rosa Island during the latter portion of the 19th century. Storke was instrumental in forming the Santa Rosa Island Chapter of the Santa Cruz Island Foundation (1993-2000). He and his wife, Barbara Sellar Bullard (1913-1984), had five children:

Charles Albert Storke II died at age 87 on December 6, 1998. He is buried in the Santa Barbara Cemetery.

In his own words:

“I knew very slightly Ed Vail, because I was interested in the waterfront and sailing. He had the Selene, a racing sloop — it was about 55 feet long — and he entered all the races. He did very well. He had a very good boat. The foreman from his ranch at Santa Rosa Island and he would sail back and forth, and he would get smacked. They would take off in the worst possible weather for Santa Rosa Island, but he didn't seem to care. His foreman, and I think Ed too, had his cowboy boots on. He sailed the Selene with cowboy boots! That was in the late 1940s or or middle '50s.

But, the most important connection I had with the island was my father, Thomas M. Storke. He graduated from Stanford, I believe in 1898, and his uncle either A. P. More or H. H. More owned the island, I call it the ranch, running sheep. Dad went over and ran it for one or two years. He didn't ever get into much detail. I remember a few things, though. He said it was so windy that he couldn't ride his horse down the ridge without getting blown off. Every once in awhile he'd have to bring the crew in from the island on the boat, and they would get seasick. In those days the Southern Pacific was very active in state politics, the would get all of them [the island cowboys] to vote and would give them — I can't remember what the sum was — let's say $1.00 for their vote. I think dad used to have to collect them from the city jail when he'd want to take them back to the island — because they all got drunk [and arrested]. He never expressed any joy in the trip back and forth to Santa Rosa Island. Never mentioned the living conditions. He was a bachelor, not married yet. I think that as soon as he got a job in the newspaper he must have quit working on Santa Rosa Island.”