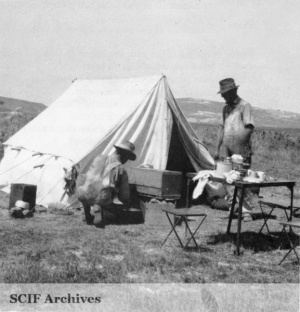 May 20, 1876 [VS]: “Captain Myron Warner with his schooner Pioneer, in company with his cousin, Mr. Ed Warner and Charles Streeter, and three hands left on Thursday, bound for Anacapa, where they will engage in sealing until the 4th of July. They took 60 barrels in which they will ship their oil. Charles Streeter goes to shoot seal. He is said to be the ‘boss’ sealsman. The oil will be sold on the island [Santa Catalina] to Captain Timms, of San Pedro, at a stipulated price. Captain Warner intends, when through this expedition, to quit the perilous business, and to settle down in our midst as a land-lubber and speculator.”

July 10, 1876 [SBDP]: “The seal-catchers, Myron Warner and Charles Streeter, returned from Anacapa during the week, and reported the season ended. They were very successful this year, and secured a great deal of oil.”

December 2, 1876 [VFP]: “W. C. Streeter has gone or goes today on his annual expedition to the islands to kill seal pups, which are said to be extraordinarily numerous this year. About 1200 were killed last year. Only the oil is saved, the skins being worthless, or rather in no demand, even to manufacturers of glue. It does seem as thought they might be made useful for something.”

January 17, 1877 [SBDP]: “Anacapa Island. Seal and other fishing— shells, mosses and a great cave. A sketch by the editor of the Ventura Free Press… The fishing business around and on the island is the most profitable. The black seals are the most numerous, though occasionally leopard seals are killed, and sometimes a sea lion. These latter do not breed on the island, but only pay passing visits. When killed, they yield large quantities of oil… The business is carried on by Captain Myron Warner, of this place, and Charles Streeter, the latter we believe, being the shootist…”