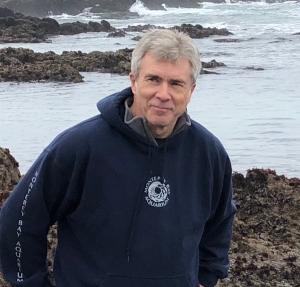 STROM, Ted S. (c. 1968-2019), a 62-year-old from Germantown, Tennessee, who worked as an associate professor at the University of Tennessee Health Sciences Center died in the September 2, 2019 fire aboard the dive boat Conception at Santa Cruz Island. Strom, a pathologist, was also a staff physician at the Memphis Veterans Affairs Medical Center.

Dr. Strom was survived by his widow, Maggie, and sons Kestrel and Pfeiffer.

“SANTA BARBARA — Recovery crews are hoping to lift the dive boat Conception off of the ocean floor and return it to shore Friday, but high winds could force a delay in that effort. As authorities began officially identifying some of the 34 people who died after a fire broke out aboard the ship early Monday morning, investigators said Friday they they believe the victims died from smoke inhalation. “All of the victims have exhibited signs that are indicative of” smoke inhalation, Santa Barbara County Sheriff Bill Brown said at a press conference Friday morning, though he noted investigators have not finished their investigation into how they died. Brown previously said authorities needed to use DNA samples from family members to identify the victims because many of their bodies had been badly burned in the fire. On Friday, he said the Sheriff’s Office’s pathologist believes the victims died before they were burned. Divers continue to search the waters off the Southern California coast for the remains of one victim whose body still has yet been recovered, Brown said. Authorities have now contacted the relatives of each of the people killed in the fire, after reaching the mother of a victim from Japan, Brown said. DNA techniques to quickly identify remains, which were employed following the Camp Fire, have been used to identify 18 of the victims so far from the Conception. Family, friends and coworkers have already identified most of the victims on social media and in news reports. Brown on Friday released the names of nine people whose family members have been notified of their deaths, noting that they had boarded the boat for a Labor Day weekend dive trip from across California and around the world. The victims identified Friday were: American High School teacher Scott Chan, a 59-year-old from Los Altos; Yulia Krashnnaya, a 40-year-old also from Berkeley who worked for the company Spiralinks; Justin Dignam, a 58-year-old from Anaheim who founded a Southern California payroll company; Marybeth Guiney, a 51-year-old avid diver and traveler from Santa Monica; Alexandra Kurtz, a 26-year-old from Santa Barbara who was working aboard the boat; Caroline McLaughlin, a 35-year-old software engineer at a science education website from Oakland; Wei Tan, a 26-year-old from Goleta who grew up in Singapore; Ted Strom, a 62-year-old from Germantown, Tennessee, who worked as an associate professor at the University of Tennessee Health Sciences Center; Apple employee Dan Garcia, a 46-year-old from Berkeley.”

September 6, 2019 [Daily Memphian]: “Germantown resident Dr. Ted Strom was one of the victims in a boat fire near Santa Cruz Island earlier this week, the VA Medical Center at Memphis confirmed on Friday, Sept. 6. The VA in Memphis issued this statement: “The leadership and staff of the Memphis Veterans Affairs Medical Center are deeply saddened by the loss of Dr. Ted Strom. His exceptional service to Veterans as a staff physician is a testament to the type person that he was. Our thoughts and prayers remain with his family during this time. He will certainly be missed.” Strom, 62, had worked at the VA Memphis since January 2009. He was one of 34 people who perished aboard the 75-foot dive boat Conception when a fire broke out on deck early Monday morning, Sept. 2, according to a report in the LA Times. The passengers were asleep below the deck in bunk beds and apparently unable to escape. The boat and its operator, Truth Aquatics Inc., were in compliance with U.S. Coast Guard regulations at the time of the fire, according to the Times report. The cause of the fire, which sank the Conception, remains under investigation.”

September 12, 2019 [The Commercial Appeal]: “Germantown - Dr. Ted Stephen Strom died Sept. 2, 2019 in the Conception boat accident, during a scuba diving expedition off the coast of Santa Cruz Island, in Channel Islands National Park near Santa Barbara, CA. He was 62. He was born in Tacoma, Washington to Thomas and Josephine (Ludwig) Strom. He was preceded in death by his brother, Joseph Strom, and his parents. Ted is survived by his wife of 21 years, Maggie, and two sons, Kestrel, and Pfeiffer, sister Mary Jo (Russ), brothers Tom (Patti), and Tim, numerous nieces, nephews, and cousins. Ted attended Wilson High School before going on to achieve his B.A., M.S., M.D. and PhD at the University of Chicago. He subsequently completed residencies and fellowships at University of Colorado Health Sciences Center, University of Washington Health Sciences Center, Santa Clara Valley Medical Center, University of California - Davis Medical Center, Columbia University Medical Center, and St. Jude Children's Research Hospital. Since 2003 Ted has been an associate professor at the University of Tennessee Heath Science Center and staff physician (Hematopathologist) at the Memphis Veterans Affairs Medical Center. These appointments afforded Ted the opportunity to diagnose and help patients, publish scientific research, and teach medical students - each of which he loved very much. He was regarded by his students as a passionate, accessible mentor. A life-long Chicago Cubs fan, Ted worked out religiously, loved thoughtful books, reading the New York Times cover to cover, and was most at home in the outdoors - especially hiking, scuba diving, and kayaking. Each year, he looked forward to bettering his time at the Outdoors Inc. Canoe and Kayak Race, whatever summer vacation he and Maggie had concocted, and he loved watching the leaves change while hiking and hunting for salamanders in the Great Smoky Mountains with his family. The Strom family wants everyone to know that he passed in a place he cherished, while doing something he loved. Should friends desire, please consider a donation to Amnesty International in Ted's name.”