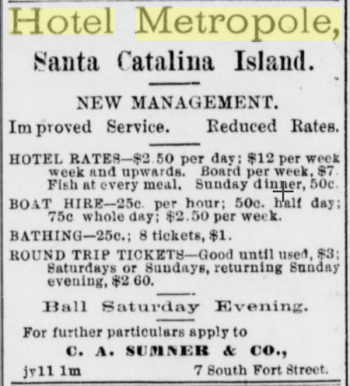 SUMNER, Charles A. (1846-1928), real estate agent, auctioneer and partner of George Shatto in the 1887 purchase of Santa Catalina Island from the Lick estate. He became first manager of the Metropole Hotel in 1888. Sumner died at age 88 on December 26, 1928. It is he for whom Sumner Avenue, Avalon, Santa Catalina Island is named.

July 4, 1887 [LAH]: “C. A. Sumner & Co., the real estate brokers, state that the Catalina Island has been positively sold to a wealthy Los Angeles speculator, who is the sole purchaser, and will improve the place as a first-class pleasure resort. They deny that anybody is interested in the sale except one Los Angeles man.”

May 16, 1888 [LAH]: “Avalon. Water piped from the mountains. Hotel now open. Steamer every other day. The season is just commencing as this favorite resort. Those who have not been there should go at once. It is the coming health resort and sanitarium. Bathing! Fishing! Boating! Hunting! To perfection. Liberal discounts to those building at once. Easy terms! A good opening for several different stores. C. A. Sumner & Co. Real Estate and Insurance Agents.”

August 13, 1889 [LAH]: “C. A. Sumner was over from Catalina yesterday and says he has now ample room to accommodate everybody at the hotel.”

August 28, 1889 [LAH]: “C. A. Sumner, the popular manager of the Metropole, got up an expedition to the famous Black Jack Peak yesterday. Black Jack is about 2,600 feet high, and in the center of the wildest part of the island, surrounded by a wild jumble of peaks and canyons. The party consisted of Miss Chambers, the Misses Gilbert, Mrs. Dr. Kannon, Miss Agnes Wilson, Robert Vandervoort, John W. Vandervoort, Mr. McGuire, C. F. Holder, Frank Whittley, C. A. Sumner, Dick Sumner, Cecil Sumner and three guides. The Wanda took the party to Gallagher's Landing, where Mt. Whittley met them with horses and accompanied the party throughout the entire trip, adding much to their pleasure by his extreme courtesy and kindness. Mr. Whittley owns all the sheep on the islands. He has lived there for thirty-four years, and has the largest sheep corral in the world. The party rode to Black Jack, made the ascent and returned by Middle Ranch, a most delightful horseback ride of fifteen miles, and one that all who come here should take. The quail shooting was simply the finest I have ever seen...”

May 2, 1907 [LAT]: “Old posts, marking the line of the ranches on Catalina Island before it had become a famous resort, were discussed yesterday, while the new posts, pulled up by the Meteor Boat Company, defendants in the present suit, were not made as much of as they had been at previous hearings. The action is to secure a permanent injunction to prevent the Meteor Boat Company from landing on the beach at Avalon. Two witnesses, called by counsel for the Santa Catalina Island Company, testified to the position of Crescent Avenue with regard to the beach at Avalon. C. A. Sumner, who knew the island many years ago, stated on cross examination that the intention of the owners of the island, in having the survey made for Crescent Avenue, had been to leave a strip of their own property between the highway and the beach. The witness mentioned an ambition of Mr. Shattuck, before the island passed into the hands of the Bannings: ‘He owned it to high tide, and he wanted to own it to low tide.’ Sumner, who kept a hotel at Avalon in 1890, has not revisited the place for years, and could give no recent history. Edwin Stanton, more recently employed upon the island, also testified to the position of the highway with regard to the beach, and admitted that the water at high tide always comes inside the ranch line fence.”