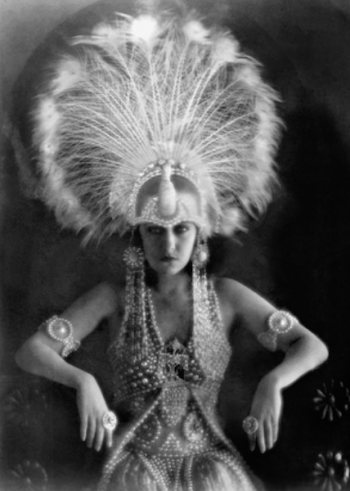 SWANSON, Gloria (1899-1983), Chicago-born Hollywood actress who played her first starring role on Santa Cruz Island in the 1919 silent film, Male and Female, directed by Cecil B. DeMille. The film is based on the J. M. Barrie play, The Admiral Crichton. It centers on the relationship between Lady Mary Loam, played by Gloria Swanson, a British aristocrat, and her butler, Crichton. Crichton fancies a romance with Mary, but she disdains him because of his lower social class. When the two and some others are shipwrecked on a desert island, they are left to fend for themselves in a state of nature. The aristocrats' abilities to survive are far worse than those of Crichton, and a role reversal ensues, with the butler becoming a king among the stranded group. Crichton and Mary are about to wed on the island when the group is rescued. Upon returning to Britain, Crichton chooses not to marry Mary; instead, he asks a maid, Tweeny (who had fancied Crichton throughout the film), to marry him, and the two move to the United States.