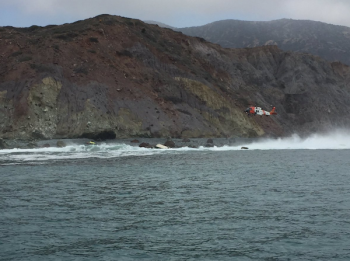 Salta Verde Point, Santa Catalina Island
where three of seven men were killed on June 25, 2016
when their skiff overturned during a high south swell. 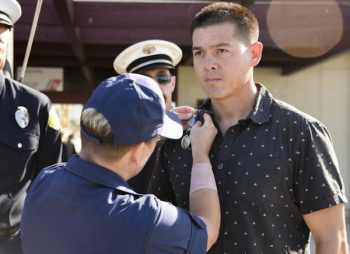 Salta Verde Point, Santa Catalina Island is located on the seaward side of the island, seven miles south of Little Harbor, between China Point and Silver Canyon. It is 5 miles west of Church Rock on the south side of the island.

SALTA VERDE: “A stretch of the southern-central portion of the island about five miles long by two miles broad. It extends from Mt. Viscanio westward and lies between Bull Rush Canyon and the Pacific. This area slopes abruptly toward the Pacific and is traversed by many steep and difficult canyons and gullies. The ridges and gullies are clothed with salt-grass, sage-brush, cactus, stunted oak and Ncostyphonia integrifolia.” [Millspaugh & Nuttall Flora of Santa Catalina Island (1923)].

June 25, 2016 [mylanews.com]: “Three people were killed and four others were injured, one critically, when their 15-foot boat capsized Saturday on the “backside” of Catalina Island, authorities said. Firefighters and paramedics were dispatched to the location at 9:32 a.m., according to a county fire department dispatcher. A witness reported that a 15-foot skiff with seven people on board had overturned near Salta Verde Point on the backside of the island, according to Sondra-Kay Kneen of the U.S. Coast Guard. Waves in the area were reported to be between four and six feet. A good Samaritan rescued two boaters from the water and reported seeing another boater on the rocks. A Coast Guard helicopter crew rescued the person from the rocks, Kneen said. Baywatch Isthmus and Baywatch Avalon recovered three bodies from the water, and a Catalina Island Conservancy officer located the seventh person on the beach, she said. The Coast Guard transported one person to Long Beach Memorial Medical Center and Los Angeles County Fire Department paramedics took the other three people to area hospitals, Kneen said. One of the survivors was listed in critical condition, according to Los Angeles County lifeguards. Sheriff’s homicide detectives were investigating the case, according to Deputy Grace Medrano of the Sheriff’s Information Bureau.”

June 25, 2016 [LAT]: “Three people died and four were hospitalized after a small boat capsized off Santa Catalina Island on Saturday morning. The boat capsized about 9:30 a.m. with seven men aboard after being hit by big waves, said Spencer Parker, a spokesman with the Los Angeles County Fire Department. Three men were dead when rescue crews arrived and four survivors were rescued and transported to hospitals, he said. The three men were later identified as Kyung Hwan Kim, 47, Jason Jung Noh, 62, and Young Joon Park, 64. Two of the survivors were pulled out of the water by a good Samaritan from a charter vessel that reported that the 22-foot skiff had overturned, authorities said. A Coast Guard helicopter crew member rescued another person from some rocks in the water. A Catalina Island Conservancy officer found the seventh boater on the beach. Two survivors were in fair condition and two others in critical condition at local hospitals, sheriff’s officials said. Waves in the area were reported to be 4 to 6 feet high, Coast Guard officials said. The incident occurred off Salta Verde Point on the “back side” of the island, Parker said. The Los Angeles County Sheriff’s Department’s homicide division is investigating the three deaths, which is standard procedure in such incidents.”

October 5, 2019 [radio.com]: “When a passenger boat carrying seven people capsized in rough surf off Santa Verde Point, California first responders and bystanders swung into action, saving four lives. The Good Samaritans were honored by the Coast Guard during a ceremony this week at Base Los Angeles-Long Beach. "It was an honor and privilege to recognize these first responders for their courageousness and selfless acts of heroism,” said Capt. Monica Rochester, the Coast Guard Sector Los Angeles-Long Beach commander. "The actions performed on June 25, 2016, are a tribute to the spirit of seafaring partnership the Coast Guard always looks to facilitate." Daniel Black was awarded the Coast Guard's second-highest award for maritime valor, the Silver Lifesaving Medal. He had been on a routine patrol for Catalina Island Conservancy when he saw the boat capsize. He ran more than a mile to the beach and began providing emergency medical aid to survivors. After assisting onshore, he learned that one person was stuck under the hull of the capsized vessel. Black waded into eight-foot breaking waves to drag the individual from the boat. Black, who is in the Army said he was both humbled and felt lucky to receive the recognition. "I was new to Catalina when this happened,” Black explained. “I couldn't have done what I did alone. It took teamwork, physical fitness, and a great support network to help save those people." Capt. Robert Pelkey, Brian Kari, and Jeff Wilk, of the Los Angeles County Fire Department-Lifeguard Division, received certificates of valor. They were part of a boat crew that plucked survivors from the water. "It's great to be part of the maritime community on Catalina Island,” said Pelkey. "Receiving this recognition today was such a tremendous honor."