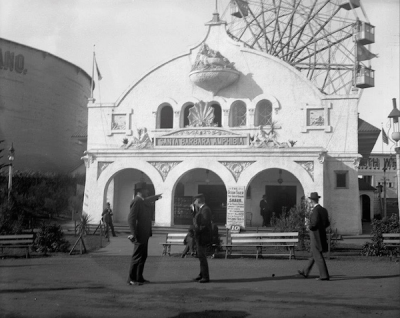 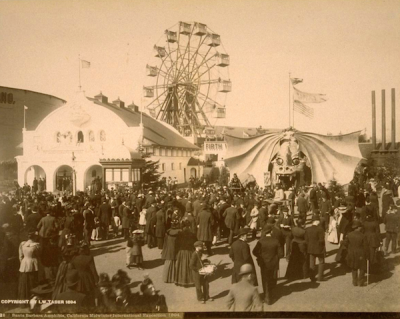 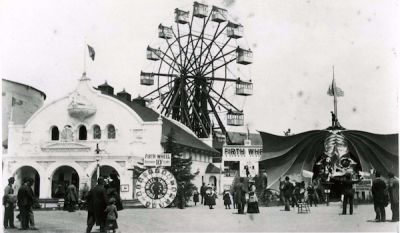 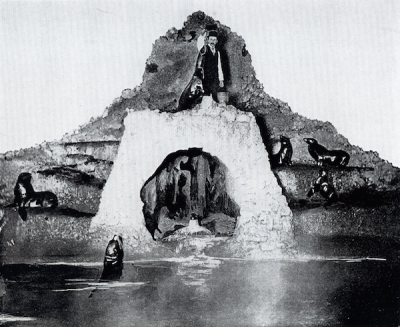 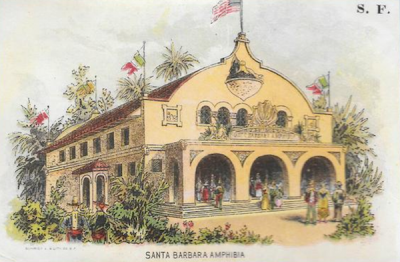 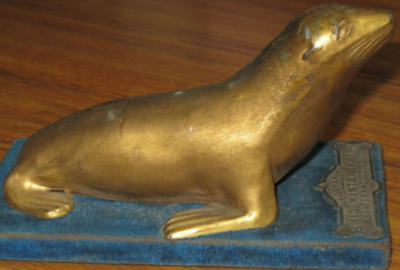 Santa Barbara Amphibia (January 27-July 5, 1894) was built in San Francisco for the Mid-Winter Exposition in 1894 by Santa Barbara Mayor, Ed Gaty and sea lion hunter, Eugene Rogers. It was designed by Peter Barber. Atop the building was a sculpture of a sea lion sitting on a rock.

Officially entitled the California Midwinter International Exposition of 1894, it was a World's Fair that officially operated from January 27 to July 5, 1894 in San Francisco's Golden Gate Park. In 1892, U.S. President Benjamin Harrison appointed Michael H. de Young as a national commissioner to the 1893 World's Columbian Exposition held in Chicago. During the exposition in Chicago, de Young recognized an opportunity to stimulate California's economy in its time of depression. In the summer of 1893, de Young announced his plans for the California Midwinter International Exposition to be held in Golden Gate Park. One of the draws, according to de Young, was California's weather, which would allow for a fair in the middle of winter. Golden Gate Park Superintendent John McLaren fought against holding the exposition in the park claiming,"the damage to the natural setting would take decades to reverse."

In August 1893, the U.S. Congress approved for the fair to be held in Golden Gate Park. Prior to the Midwinter Fair's opening day, in 1893, Isaiah West Taber (1830-1912) won the concession to be the official photographer of the fair. Taber documented the fair from when the grading of the land began, and continued photographing the fair throughout its entirety. He sold his photos in a striking, multi-story pavilion during the exposition, on the fair grounds. At the end of the fair, he compiled about 130 of his original photographs into a souvenir book entitled Souvenir of the California Midwinter International Exposition. Much of what is known about the fair, especially visually, comes from Taber's photographs.

The fair encompassed 200 acres centered on the park's current Music Concourse. More than 100 buildings were erected for the exposition, and more than 2 million people visited. As many as 75,000 people would visit in a day. The fair was to feature four major buildings. These buildings included the Fine Arts Building, the Agriculture and Horticulture Building, the Mechanical Arts Building, and the Manufacturers and Liberal Arts building. The Fine Arts building has become the M.H. de Young Memorial Museum (and has been rebuilt in a much different design). Other major attractions include the park's famed Japanese Tea Garden, Bonet’s Tower, the Santa Barbara Amphibia, the amusement attractions, and the many cultural exhibits.

The Santa Barbara Amphibia was an exhibit encompassing 76' by 56' feet, which held many species of marine life that made the Santa Barbara channel their home. The interior contained a large tank in a L-shaped fashion that contained 40,000 gallons of sea water, allowing the aquatic life to feel at home. Behind the tank there were rookeries and grottos terraced like the Channel Islands; the sea lions, sea tigers, and sea-otters natural habitat. However, not all the marine animals were alive. Most notably on display was a pickled Basking shark adjacent to the tank of water. The Mayor of Santa Barbara, Edward W. Gaty, spent months carefully preparing what was to be a demonstration of Santa Barbara’s channel. Along with sea-lions, sea-otters, and leopard sharks, he also sent Mexican leather work, seashells, and an array of mosses. As a last-minute decision Mayor Gaty added the El Montecito Spanish band to play string music for the delectation of sightseers.

George A. Black was a seal trainer for the Amphibia at the San Francisco Mid-Winter Fair in 1894.

September 5, 1893 [LAT/SB]: “One of the numerous concessions the Midwinter Fair Association has been asked to grant is the right for a company of enterprising Santa Barbara businessmen, Mayor Gaty and Mr. Rogers being interested in the company, to erect a building on the fair ground to contain grottos, aquariums and rookeries, where seals, sea otters, sea lions and sea tigers will sport in their native element…”

September 24, 1893 [LAT/SB]: “Mayor Gaty, on Saturday, showed the Times representative the plans for the Santa Barbara aquarium for the Midwinter Fair, and they disclose a very handsome building, 86 by 96 feet, and 32 feet high, finished in imitation ashlar stone work in concrete, with a very pleasing exterior. The large tank in the main part is L-shaped and will contain 40,000 gallons of sea water, allowing the marine monsters to sport in their native element. Behind the tank there are rookeries and grottos terraced like the haunts of the sea lions and sea tigers on the water-worn cliffs of the Channel Islands. There will be toilet rooms and a promenade opening off the second story, the building and its fitting up bringing the cost of the exhibit up to $20,000. Mayor Gaty went to San Francisco Saturday to select a site for the building, and work will be commenced at once. The expedition for the capture of the seals will start about the last of this month.”

October 7, 1893 [LAT/SB]: “Mayor Gaty is expected home from San Francisco Saturday, he having made all arrangements for the sea lion exhibit at the Midwinter Fair.”

October 9, 1893 [LAT/SB]: “Mayor Gaty returned from San Francisco Saturday. He reports that the Midwinter Fair promises to be a grand success. Mr. Gaty says that he was obliged to entirely alter the plans and outside appearance of the proposed Santa Barbara aquarium, because the plan as first drawn did not harmonize with the exterior architecture of the other buildings. He says he will have the 40,000 gallon tank lit with electric lights in heavy submerged glass…”

October 18, 1893 [LAT/SB]: “Mayor Gaty leaves todayat the necessity of incurring this expense and trouble of transporting seals from Santa Barbara is therefore not apparent.”

March 15, 1894 [LAT/SB]: “The big [basking] shark. Some unsung scoundrel has lopped two or three inches off the extended fluke of the big shark’s tail now undergoing a pickling process preparatory to mounting. One hundred dollars is offered for information leading to the conviction of the wretch; it is even stated that if the perpetrator will himself acknowledge the deed, he will be given the money, and need not fear arrest. As a matter of detail however, he will probably be lynched for we are justly proud of that shark. Three barrels of oil from the liver were shipped Tuesday to San Francisco by Mr. Rogers. The oil has a medicinal value equal to that obtained from cod liver, and finds a ready markets is rapidly nearing completion. The gasoline schooner Hattie from San Pedro left Monday for San Miguel Island to capture some sea lions, tigers, giraffes and elephants for the marine menagerie. P. E. Law left with his camera, and will take pictures of the dangerous undertakings for the San Francisco Examiner.”

December 9, 1893 [LAT/SB]: “The sea lions and two white seals were brought back by the gasoline sloop Hattie from the islands. P. E. Law, who accompanied the expedition for the Examiner, secured several fine photographs of the men and animals in action. The Amphibia building is being ready for their reception.”

December 12, 1893 [LAT/SB]: “Mayor Gaty returned from San Francisco on the Santa Rosa Sunday evening, and reports the handsome building erected by the Santa Barbara Company, which proposed to exhibit amphibia, to be entirely completed. The plans have been slightly changed, and all who have seen the building, agree in saying that it is one of the handsomest small buildings on the grounds. The howling collection of sea lions which were brought over from the islands a few days ago is still anchored a short distance from the wharf. Messrs. Gaty and Rogers are thinking of taking a Spanish band from this place to play string music for the delectation of sightseers. The Spaniards will be dressed in their picturesque national costumes, and will no doubt be an added attraction.”

December 15, 1893 [LAT/SB]: “Messrs. Gaty and Rogers went up on the Santa Rosa Wednesday night to superintend the seals and sea lions which were sent up to the Amphibia exhibit on the same boat.

December 27, 1893 [LAT/SB]: “The schooner San Mateo, with a party of seal hunters on board, left for the islands on Monday morning. The seal hunters will be left on Santa Cruz Island while the San Mateo goes to San Pedro for an overhauling and repainting. The instructions are to catch none but the very largest seals and sea lions for the Midwinter Fair Amphibia exhibit.”

January 7, 1894 [LAT/SB]: “Mayor Gaty’s Amphibia is to receive another reinforcement of seven seals that were brought over from the islands and landed at the wharf yesterday. They were shipped for San Francisco last night on the Corona. Unkind people have been heard to say that if visitors to San Francisco wish to view seals they have but to direct their glasses in the direction of the bay, and that the necessity of incurring this expense and trouble of transporting seals from Santa Barbara is therefore not apparent.”

March 15, 1894 [LAT/SB]: “The big [basking] shark. Some unsung scoundrel has lopped two or three inches off the extended fluke of the big shark’s tail now undergoing a pickling process preparatory to mounting. One hundred dollars is offered for information leading to the conviction of the wretch; it is even stated that if the perpetrator will himself acknowledge the deed, he will be given the money, and need not fear arrest. As a matter of detail however, he will probably be lynched for we are justly proud of that shark. Three barrels of oil from the liver were shipped Tuesday to San Francisco.”